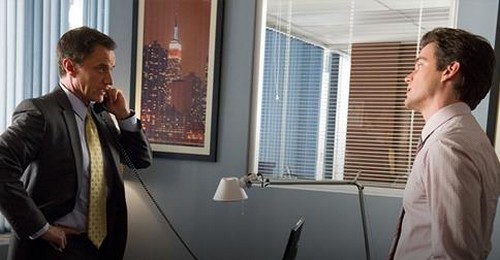 White Collar continues tonight with an all new Thursday December 4, season 6 episode 4 called, “All’s Fair” and we have your weekly recap below. On tonight’s episode, Peter and Neal [Matt Bomer] investigate someone from Mozzie’s [Willie Garson] past who is running another con at Mozzie’s expense.

On last the last episode, Neal was conflicted over scamming an innocent mark. Peter was working with an Interpol agent who could ruin their operation. Did you watch the last episode? If you missed it, we have a full and detailed recap, right here for you.

On tonight’s episode as per the USA Network synopsis, “Peter and Neal focus on a case dealing with someone from Mozzie’s past.”

Be sure to stop by here later tonight at 9 PM EST for the live recap of White Collar season 6 episode 4 “All’s Fair.” It’s sure to be a great one, and we’d love to hear your thoughts throughout the show. In the meantime, hit up the comments below to chat about all the things you’re loving about this show.

The Pink Panthers seem to be shunning Neal. He hasn’t heard a word from them in days and the feds are already starting to get anxious. Has Neal’s cover been blown or is there still a chance to infiltrate the organization?

Neal took a break from worrying when he got a message from. Moz, himself, had received a secretive message to meet somewhere out of the way so he thought that maybe the pink Panthers were trying to contact him in order to get to Neal. However it wasn’t the notorious jewel thieves that had lured both men to Brooklyn. As it turns out, it was Eva who had sent Moz that message. And Eva is Moz’s wife.

Moz had met Eva while he was trying to con her. He was pretending to be a wealthy baron and she was a wealthy widow. Yet after the ceremony, they both realized the other was broke. They were trying to pull a Sweetheart’s con on each other and the fact it had worked so well on another con artist soon made them realize they should team up. So they did and for a while it worked.

Then they went separate ways. Until now that is. Eva was reaching out to him and Moz just merely assumed she was interested in getting back together. But he was disappointed when she had instead informed him that she wanted a divorce.

Eva is getting married again. And Moz simply can’t wrap his head around that. He thinks she’s planning on conning her new husband. So he told Peter, yes the same Peter he’s always making fun of for being a suit, the feds should look into her. And Peter turned him down.

Although he did take a quick look into Eva and her fiancée. And he found nothing shady. So that was that for Peter.

But nor for Neal. Neal tried to humor Moz by going to meet this new fiancée with him. Yet, Eva’s future husband appears to know all about Eva’s past. And he doesn’t care. Sure, the new guy is in charge of running a charity but as he told Neal and Moz – he has no direct access to any of the money passing through.

Later, the same fiancée that had appeared to be almost perfect chose to confront Moz when he was alone and he warned the other man to stay out of his relationship with Eva. And he did that by beating up Moz yet making sure there wasn’t any evidence left behind. So that’s when Moz began to suspect Eva and her fiancée were working on a con together. Because his wife’s latest boy toy was just a bit too good at beating people up.

Moz roped Neal and Peter into looking at Eva’s relationship one more time. He was that sure he was right about something being fishy and while Neal was quick to believe Moz had gone off the deep end – Peter was starting to see what Moz saw. Jack, Eva’s fiancée, was too good to be true.

And it was Jack’s leg injury that had tipped him off. Upon closer inspection, the injury wasn’t as bad as Jack was trying to let on. Jack actually didn’t needed to use a cane but he was carrying one around to build up his alibi.

Peter and the guys back at the office looked into Jack’s charity. And from all appearances, it’s on the up and up. But the charity does give two con-artists admittance to some of the best locations in the world. Namely, art galleries.

Eva and Jack’s charity was hosting an event at a famous art gallery. Some of the paintings and objects inside are worth millions. And so Neal and Peter had figured out where Eva and Jack were going to hit next. Though they had also almost lost Moz in the process.

While the guys were at the office, Eva had contacted Moz. It seems she and Jack had built nearly perfect covers for themselves and they didn’t want to risk that. So after they had robbed the art gallery – they were going to pin the crime on Moz.

Luckily, Moz’s friends got to the event in time to warn him. Moz hadn’t wanted to believe them at first but then he tested Eva. And she did exactly what they said she would. So Moz turned on her. He sent the other guys after Jack and said he was going to deal with Eva.

But when the time came, Moz just couldn’t turn her over to the feds. He helped her escape for old time’s sake. And Peter hadn’t pushed him for answers.

Afterwards, Neal finally heard back from the Pink Panthers but it wasn’t good news. The Pink Panthers know they have a mole inside of their organization. The info Neal has passed along ended up revealing these guys’ master plan. They’re going to rob the federal reserve and now it’s up to Neal on whether or not he can escape them if they ever figure out he’s the one that’s been working with the feds.