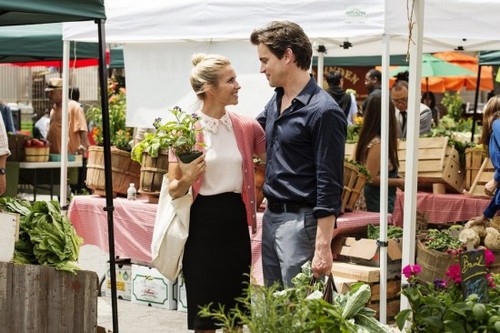 White Collar continues tonight with an all new Thursday November 20, season 6 episode 3 called, “Uncontrolled Variables” and we have your weekly recap below. On tonight’s episode, Neal [Matt Bomer] is conflicted over scamming an innocent mark while running a con for the Pink Panthers. Elsewhere, Peter works with a reckless Interpol agent who may put their entire operation in jeopardy.

On last the last episode, Peter presented Neal’s deal to his superiors at the FBI: Neal brought down the Pink Panthers in exchange for his freedom. And this time Neal was making sure there would not be be any technicalities. The stakes couldn’t be higher for Peter either, as Pillar made it clear that the bureau was intent on bringing down the Panthers and Peter could lose his job if Neal’s plan went south. When Neal found out that Keller was now part of the Panthers, Peter wanted to call off the mission and simply take Keller down once and for all, but Neal knew that this was his last chance. He couldn’t trust Keller and couldn’t figure out why he didn’t sell him out to the Panthers right away, unless Keller needed something from him. Did you watch the last episode? If you missed it, we have a full and detailed recap right here for you.

On tonight’s episode as per the US Network synopsis, “Neal is conflicted over scamming an innocent mark. Peter is working with an Interpol agent who could ruin their operation.”

Be sure to stop by here later tonight at 9 PM EST for the live recap of White Collar season 6 episode 3 “Uncontrolled Variables.” It’s sure to be a great one, and we’d love to hear your thoughts throughout the show. In the meantime, hit up the comments below to chat about all the things you’re loving about this show.

Before they can start moving against the Pink Panthers, Neal’s safety has to be ensured. Neal was assigned by them to work with Keller on a mission. And seeing as no one can ever trust a man like Keller – Peter thought it was time to meet Keller’s handler. Some idiot at the Interpol let Keller go free and it’s in everyone’s best interest to learn more about this mysterious agent.

Keller has a tracker implanted in his arm and because the Pink Panthers screen all of their members – Keller’s device must have been turned on and off at will. So Peter and his guys knew his handler was close by. No one would have let Keller off his leash without backup.
And Neal and Keller working together proved to be the perfect time to introduce himself to whom Diana is referring to as the foreign Agent Burke.

However the other agent couldn’t be any different. Peter met the other man while they were both spying on their respective Cis. And they traded words. It seems the other agent didn’t want the FBI stepping on his toes and Peter let him know that he would have appreciated some kind of warning prior to Keller’s actual release. They are on US soil after all.

So a meeting was called. Keller and his agent were told to play nice. Or else Peter was going to steal their case from right underneath them.

But Neal’s might be one to jeopardize his own cover in the Pink Panthers. He was told to work with Keller and that’s it. His new bosses never mentioned bringing in new people. And Moz hasn’t been vetted by anyone. Including Keller’s people. Luke sure wasn’t happy when Moz made a mistake and he was the first to inform them that Moz put the entire mission was at risk.

Moz was supposed to copy a file and he was planning on creating a copy on his flashdrive. Yet, when he broke into the vault, he learned the file he was going to steal was on a computer system dated in 1971. Apparently the stone age is perfect fire wall.

Meaning Moz was going to have to work like he was downgraded. Sadly though there wasn’t any time to do it while he was inside of the vault. So he stole the original file rather than make a copy of it. And that meant he would soon have to find a way to return that file.

Thankfully Moz was able to encrypt it but he still had to deal with problems his sticky fingers caused. And as for the whole returning the original file part, well Neal kind of ran into some problems with that. Subsequently, he had used a perfectly innocent young woman to help gain entrance to the file and in the process of conning her he ended up developing feelings for her. Her name was Amy and she was nice.

She was basically a girl from a small town trying to make it big in the city at powerful firm. But several things happened that no one could have predicted. Like Luke, Keller’s handler, stealing the file after Moz had encrypted it. It seems he and Keller were simply going to plant in on Amy thereby making her accountable for the fallout.

Amy’s boss had returned early from his business trip. So he would have eventually noticed a vital and important file missing. Then he would have raised the alarm and possibly have broken Keller’s cover. So two men that were utterly lacking in morals thought up a plan.  They were going to pin everything on Amy. And she would have made the perfect scapegoat if Neal hadn’t interfered.

Amy has been at the job the longest and while she’s always the first to arrive/ last to leave – her boss treat her like she’s nothing more than a secretary. Amy was perfect in a sense but thankfully she had a guardian angel. Neal had saved her from going to prison and he thought up of a way to get her to confess to his crimes without outing either him or Keller.

You see Keller was prepared to kill her if he had to but Neal stopped him. Neal wanted her to live so he gave her a story to sell her boss. And she used it. Though she changed the ending. Neal had devised a way to use her stealing an important file to demand a raise. But Amy didn’t want to earn a promotion that way. So she quit her job and told Neal that she was moving back home.

New York was just too dangerous for her. And Peter’s threat to Interpol didn’t seem to take effect. So frankly the city isn’t going to be safe for anyone until the Pink Panthers are dealt with.