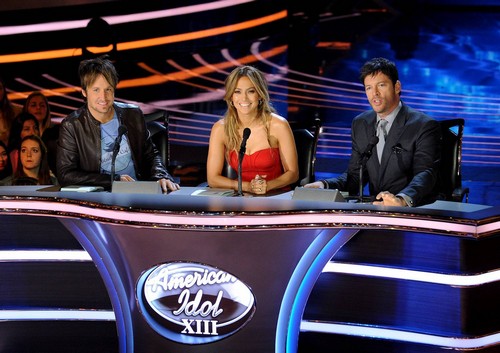 Tonight on FOX AMERICAN IDOL returns with the results show.  Because the judges used their one save last week one finalist out of the top eight will be sent home tonight.  Did you tune in to watch the performances last night? If not we did a detailed recap of it all for you right here.

Last night the top right contestants took the stage and had a chance to own the spotlight.  Season 13 is really heating up! C.J. Harris, Jena Irene, Caleb Johnson, Jessica Meuse, Alex Preston, Dexter Roberts, Malaya Watson and Sam Woolf – took the stage in hopes of impressing the judges and winning America’s vote by performing  songs from the 80s.  Season 7 winner of Idol David Cook stopped by to mentor the Idols.  If you missed last night’s show we also have all the videos of last night for your enjoyment.

On tonights live results show, tune in to find out who will be sent home because the judges have no saves it is more important than ever to vote for your favorite competitor.  By the end of the evening we will have our Top 7.

Tonight’s American Idol Elimination episode begins now, Ryan Seacrest takes the stage.  Ryan brings out the 2014 American Idol Judges, Jennifer Lopez, Keith Urban, and Harry Connick Jr.  Next Ryan shares a clip of the remaining eight American Idol contestants hanging out after their live performances last night.  In the clip Caleb congratulates Dexter on his performance, Alex says he is disappointed in the judges’ feedback, and they laugh at how hyper Harry Connick Jr. was during the show last night.

Last week the American Idol judges used their last “Save” vote, so they will not be able to save whichever contestant is eliminated.
CJ and Malaya join Ryan on the stage and he reveals that CJ is safe…Malaya Watson has been eliminated from American Idol.