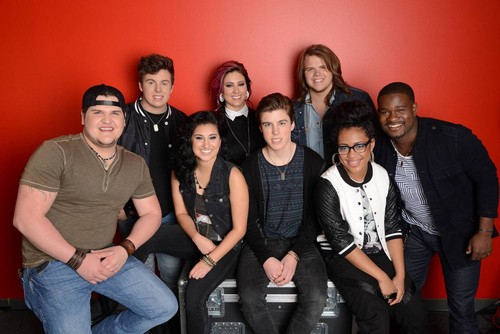 It’s another exciting night for AMERICAN IDOL on FOX. Season 13 is really heating up.  On tonight’s episode the top 8 perform again.  The judges used their save last week and there was no elimination.  Tonight in the Top 8 perform songs from the 80s.

On last week’s performance show the Top eight – C.J. Harris, Jena Irene, Caleb Johnson, Jessica Meuse, Alex Preston, Dexter Roberts, Malaya Watson and Sam Woolf – performed the song they auditioned for Idol with.   The judges and America got to see how far the contestants have come since they auditioned.  By the end of the show last week Sam Woolf was the person with the lowest amount of votes but the judges decided to use their one and only save on him.  Did you happen to catch the last episode and see which cast member was sent home? If not we recapped who got the boot and it’s all right here for you.

On tonight’s episode the Top finalists take the stage in hopes of impressing the judges and winning America’s vote.  The theme for the night will take the idol stage back to the ’80s. It should be interesting because the idol finalists have to go back to a year when most of them weren’t even born yet.  Season 7 winner David Cook is on hand as the guest mentor.

Judges Comments: Keith – “It was a great way to start.  You know what I loved about it, is when you change the arrangement up people are first like what is going on?  And then you find yourself digging it.  The keying was a little low but then you sailed at the end.  I love the originality you bring to your songs.”  Jennifer – “I’m going to get booed but for me it languished a little bit in the middle, I thought you were gonna start ramping it up.  When you got to the “Yeah Me” I kind of wanted a little more Rock n Roll.  You definitely put your stamp on it and at the end of the day I did like it.”  Harry – “I wasn’t really a fan of the arrangement, but what I did like is that fact that you are trying and twisting these arrangements.  I felt like it was really choreographed, the American Idol producers probably won’t like this but just forget about the audience and run around and feel it.”

Dexter Roberts is singing “Keep Your Hands To Yourself” by Georgia Satellites. [VIDEO HERE]

Judges Comments: Jennifer – “I was just saying to Harry you always come out here and sing kind of perfect, but it really felt good today.  We always get on you about not owning the anthem songs, but I think today you did it.”  Harry – “I’m still thinking about last week and you can do no wrong in my eyes.  Coupled with last week what you did was fine, I think you bought yourself some time and you could rock out.”  Keith – “One of the things, you loosened up when you got to this part of the stage.  Part of that is when you have too many things to remember, is in that situation, feel free to do something unexpected.  Do something completely unexpected and do something in the moment.”

Malaya Watson is singing “Through The Fire” by Chaka Khan. [VIDEO HERE]

Judges Comments: Keith – “There is never any doubt in your vocal ability.  David Cook even said you are a fire-cracker.  Try and lay back into it a little more, I felt like there were a lot of places where you were anticipating it.  I could feel that I could see that.  If you had a voice that was limiting you don’t have to worry about that.  Just chill out and coast through it.”  Jennifer – “You know you’re the baby of the group, we all know how talented you are.  You just need to relax up there we all get tense when those moments are coming.  The trick is to relax and wait for it.  As long as you have the breath behind it there is nothing to worry about it.”  Harry – “There aren’t a lot of young people out there that can hit the Chaka notes.  However, I felt like the entire song was geared up for the moment, like in the back of your mind you were like I gotta hit this note.”

Jessica Meuse is singing “Call Me” by Blondie. [VIDEO HERE]

Judges Comments: Harry – “I’m not sure how good this critique will be, but I will say this.  You have a great voice and it sounded great on that song.  I want to emphasize groove.  You need to sing that shuffle girl, feel that groove, sing in the pocket.  Know what I mean?” Keith – “It’s gotten better over the weeks, but I’m still waiting for you to release into it completely.  It’s almost there, like your close to the door and ready to go into the party.”  Jennifer – “When you sing a song like that it’s like call me, don’t call any other girl, I will take care of you.  Blondie was a sexy singer, and that was such a sexy song.  If you can’t tap into that, then that is not a great song for you no matter how great you sang it.”

Judges Comments: Keith – “Hey Sam, how do you feel after that performance? I love that you did that on your acoustic guitar, that’s part of why we saved you last week, there is a musicality about you.  I loved the way everybody looked at you down there.”  Jennifer – “Sam I thought you did a great job tonight, I was watching you intensely.  You really get showcased when you play with your guitar, and you are really trying to feel it.  I even saw you make yourself bluch at one point, oh my goodness I’m having feelings.  That’s what is supposed to happen!”  Harry – “I just would like to make two points.  You were looking into the camera the whole time.  You were surrounded by all these young girls, it’s okay to look at them.  Second, google Ricky Nelson tonight.  You are an impressionable guy and this is the time for you to learn from people before you and something may click.”

Alex Preston is singing “Every Breath You Take” by The Police. [VIDEO HERE]

Judges Comments: Harry – “Here’s what I really liked, it sounded like a new tune.  You put your own touch on the song.  As I watch you week to week there’s something that comes to mind, the difference between a performer and an entertainer.  Any one can be a performer, you can perform in your livingroom.  In order to be an entertainer you have to have your own nuance.  Eventually this coffeehouse style in going to catch up to you.”  Keith – “First of all I want to say when you start singing you grab my attention like that man, you really do, that’s a good thing.  What I noticed about tonight was that was a bold undertaking dismantling that song and redoing it.  If you were playing that arrangement every night on tour night after night, push and pull that a little bit, take some more liberty with the tempo and tell us the story.”  Jennifer – “I disagree with the guys I love your voice and I love what you do.  I miss the melody of that song, it was such a transcending kind of song, to change it that much to me lost the soul of the song.”

Judges Comments: Jennifer – “There’s never been a contestant that I root for note by note like I root for you.  It started off a little shaky but again you have the ability that some of the other contestants struggle with, you touch people’s hearts.”  Harry – “You took the words right out of my mouth.  That’s an incredible gift.  And, what happened is when you hit the high notes in that tune you were much more in tune.  Im telling you, you’re going to get it.  It’s just a matter of zoning in and practicing that intonation.”  Keith – “I would say the same thing man.  That was a great rendition of that song.  The great thing about your voice is you got a survivor tone, I am going to rise up, prevail, and going to survive.  That’s the bit I like in your voice.”
Amanda Austin

Judges Comments: Harry – “That’s gotta make you feel pretty good.  It was exciting watching you come out because I think everyone was anticipating you singing something with a little more subtlety.  And you did it, and I’m proud of you.  Nice work”  Keith – “Yeah man, it was killer.  It was the perfect song for you, I had my lighter out it was a lighter moment.  It wasn’t all this crazy fashionista stuff, it had function, like a fanny pack.”  Jennifer – “It’s no small task to take on Steven Perry.  I thought it sounded amazing, I could just tell that maybe it was like you couldn’t wait to get to the big stuff.  Because you murder it, that’s why.”