Who Got Voted Off American Idol? Top 2 Finalists Revealed #IdolTop2 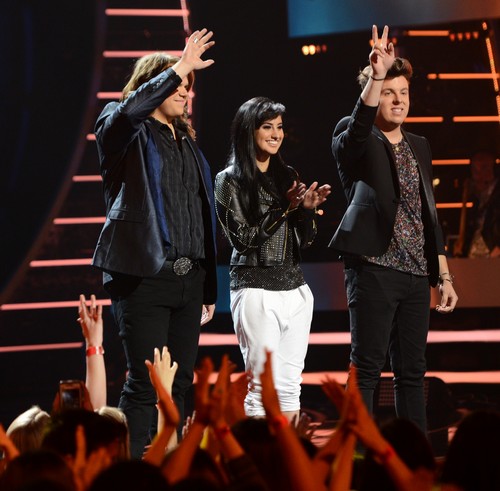 It’s another exciting night for AMERICAN IDOL on FOX. Season 13 is really heating up. On tonight’s episode one more finalist is eliminated and the Top 2 contestants are revealed and we have our finalists heading to the finale next week. Also: Scotty McCreery performs and I hope he sings “That’s Alright Mama” by Elvis again.

On last night’s episode the Top 3 finalists (Alex Preston, Caleb Johnson and Jena Irene) performed in hopes of getting one step closer to being crowned the winner of American Idol in the grand finale next week. The Top 3 performed 3 songs last night: one selected by the judges, one picked by Randy Jackson and one chosen by fans from their hometowns.  Did you tune in to watch the performances last night? If you missed it, we watched it and  we did a detailed recap of it all, right here for you.

On tonight’s episode  the three contestants are in danger of going home, there can only be two who will remain after one finalist’s journey comes to an end, as America’s vote is revealed LIVE in the all-new “1 of 3 Voted Off.”

Next Ryan shares the “Weekly Dinner Recap Clip,” which is a clip of the Final Three: Caleb, Alex, and Jena all eating diner after last night’s performances. Obviously they discuss Caleb’s crazy performance and how he slammed the microphone stand on the stage at the end. Jena mentions that she feels like she has to “prove herself week after week” since she is the Wild Card. For those of you who don’t remember, America didn’t vote to put Jena in the Final 20, but the judges used their Wild Card Vote on her because they didn’t think she should go home.

Next Ryan shares a clip of Jena Irene’s Hometown visit in Farmingon Hills, Michigan. Her high-school threw a parade for her, she stopped by the restaurant she worked at called Hercules, her family threw a surprise party for her, and then she performed a concert for the entire town and gave the Farmington Hills High School’s Senior Class a private show.

Up next is a special performance from American Idol Season 10 winner, Scotty Mcreery. He takes the Idol stage and performs his new single “Feelin It.”

Next Ryan shares a clip of Alex Preston’s hometown visit. After his parade and surprise visits from his friends and family, Alex played a concert for 6,800 members of his community. And then we get a sneak peek of Caleb Johnson’s Hometown visit to Ashville, North Carolina.

It’s time for Ryan Seacrest to reveal the results of America’s votes after last night’s performances.

According to America’s votes, The American Idol Final Two are: Jena Irene and Caleb Johnson.

Alex Preston has been officially eliminated from American Idol