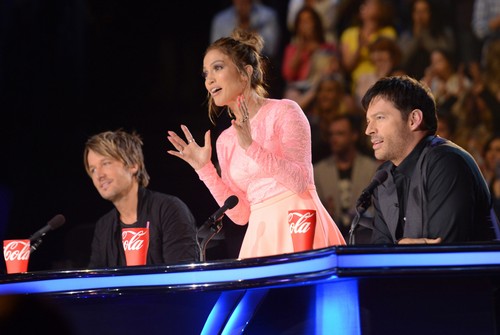 Tonight on FOX AMERICAN IDOL returns with another results show.  One finalist out of the top four will be sent home tonight.  We will find out who hits the right emotional chord and makes it through to the Top Three

Last night The Top Four finalists took the stage in hopes of impressing the judges and winning America’s vote! Tune in tonight when we find out who fell flat in the “4 Finalists Perform” on the “Love: Breakups and Make-Ups” evening where each of the finalists had three songs to perform.  Did you tune in to watch the performances last night’s performances? If you missed it, we watched it and  we did a detailed recap of it all, right here for you.

On tonight’s live results show, one finalist’s journey will come to an end as America’s vote is revealed. With no judge saves it is more important than ever to vote for your favorite competitor.  By the end of the evening we will have our Top 3.  Who are you rooting for?

Ryan Seacrest shares a clip of the Final Four: Jena Irene, Caleb Johnson, Alex Preston, and Jessica Meuse eating dinner last night after their performances. They discuss their favorite parts of last night’s show (including Jennifer kissing Jena), and ponder over which one of them will be sent home tonight.

After the clip is over the Final Four joins Ryan Seacrest on stage. He shares a highlight reel of Jena Irene, Alex Preston, Caleb Johnson, and Jessica Meuse’s three performances last night. Ryan announces the first contestant that is safe tonight according to America’s votes last night is: Jena Irene. Since Jena is safe tonight she has secured a place in the Final Three and earned a Hometown Visit.

Next Ryan Seacrest shares a video clip of the Final Four paddle-boating in a park and having a picnic together. Alex Preston reveals that one of his followers on Twitter tweeted a picture of a tattoo they got of lyrics from one of his songs. Next they discuss how excited they are to go home and see all of the support from their friends and families.

Now it is time for Ryan to reveal more of the results of the live vote last night. According to America’s votes the second member of the Final Three is Caleb Johnson.

Jessica Meuse has officially been eliminated from American Idol.