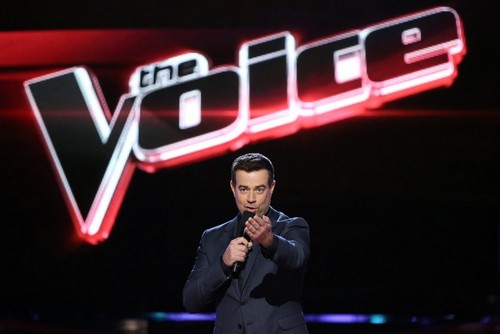 Tonight on NBC the Emmy award winning music competition The Voice returns and two vocalists are eliminated in the first results show of the season and our Top 10 are revealed.

On tonight’s episode it is the live eliminations. The three artists with the least number of votes will face elimination and sing once again in hopes to stay in the competition. One will remain by surviving the Instant Save and the other two will be eliminated.  After tonight we will have our Top 10.

Tonight’s Live Eliminations is going to be just as exciting. It will give viewers a good idea of who may actually be in serious contention to win THE VOICE this season so you’re not going to want to miss even a minute of the fun. We’ll be blogging it right here for you. In the meantime hit up the comments section and tell us your thoughts on the Live Show Premiere.

Adam says that it’s so hard not to be nervous because they all care for their teams a lot and hopes his team goes through. Shakira says that it’s really close and anything could happen. Usher says that he is taking a lot of pictures of himself; he believes that America will keep his whole team. Blake says that if people can hear than they know team Blake is the best and his artists are great hardworking people.

Third to move on to next weeks live show is Kristen Merlin and the fourth person moving on to the live shows is Audra McLaughlin.

Next up is Shakira singing her newest song “Empire”

We know see footage of a video showing how Shakira and her team visited an Elementry school to support education, it’s something very important to Shakira and has been building schools since she was 18.

The next artist moving on to the live shows is Delvin Choice and moving on as well is Jake Worthington.

Now it’s Blake and his team, Audra, Jake and Sisaundra performing on stage.

Moving on to the next live shows is Bria Kelly and joining her is Christina Grimmie.

Now singing on stage is T.J. Wilkins for what could possibly be the last time; it’s his time to shine to show America he deserves to stay and move on to the next live show of The Voice.

Adam says that it isn’t a fun place for him to be but is a fan of his, he doesn’t want Shakira to lose two people though knows he deserves to be on this show. Usher says that America needs to save T.J. right now!

Next up is Dani Moz singing “Turning Tables” to prove to America that she deserves to be on this show and move on.

Blake says that he can never understand how people vote; he knows that she is brilliant and always comes out strong. Shakira says that it kills her to see Dani there; since she is a hard worker and that she deserves another chance.

Last to sing for their life is Tess Boyer singing “Dark Side” which could be her last time performing on The Voice stage.

Usher says that it was incredible and does believe she is amazing; Shakria knows that Tess is one of the best singers on the show and can’t leave now.