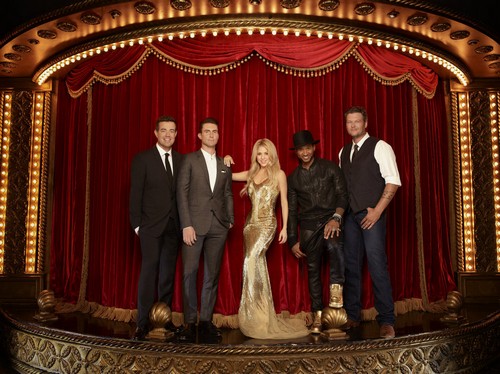 Tonight on NBC the Emmy award winning music competition The Voice is back with live eliminations when two vocalists will be eliminated in a results installment and we will have our Top 8.

On last night’s episode the top ten artists: Team Adam – Christina Grimmie, Delvin Choice and Kat Perkins.  Team Blake: Audra McLaughlin, Jake Worthington and Sisaundra Lewis.  Team Shakira: Kristen Merlin and Tess Boyer.  Team Usher: Bria Kelly and Josh Kaufman performed live in front of coaches Adam Levine, Blake Shelton, Shakira and Usher, for America’s vote.  Did you watch the performance show?  We did and we have a full and detailed recap right here for you.  If you missed the performances our performance video posts are right here.

On tonight’s episode America will vote to eliminate two more artists from the competition. The three artists with the least number of votes will face elimination and sing once again in hopes to stay in the competition. One will remain by surviving the Instant Save and the other two will be eliminated.  British pop/rock/r&b band Rixton will perform live on tomorrow’s show and coaches Shakira and Usher will perform a song with their respective teams on the Tuesday show.

Tonight’s Live Eliminations is going to be exciting. It will give viewers a good idea of who may actually be in serious contention to win THE VOICE this season so you’re not going to want to miss even a minute of the fun. We’ll be blogging it right here for you. In the meantime hit up the comments section and tell us your thoughts on the The Voice Season 6 so far.

RECAP: Carson makes a big announcement that Gwen Stefani and Pharell Williams will be coaches next season; they will be performing next Monday. First up is Usher with Bria Kelly and Josh Kaufman performing on stage together for the first time.

Next up is Shakira with her team Kristen Merlin and Tess Boyer singer a song from her newest album.

The seventh artist saved by America and moving on to the next live show is Jake Worthington.

First up to sing for her life is Bria Kelly singing “Crazy For You”, Blake says that he always thinks Bria is amazing and would never imagine to see her in the bottom three; he feels this performance was much better. Usher says he has always believed in Bria and for her to remember that she is amazing.

Next is Tess Boyer singing “Who Knew”, Adam says that it’s so bizar for her to be in this position for being such an amazing singer; he really wants to change the rules and have no one go home. Usher says that he loved the performance and was happy she made it this far; but sadly she is a bad position. He wishes her the best; Shakira says that she is devistated to see her up there again. She knows Tess is such a fighter being there again, she wants to see her comeback again.

Last to sing for her life is Kat Perkins singing “Paris Ooh La La”, Blake says that he doesn’t have to say anything with the crowd going insane; it was great. Usher says it was an electrifying performance. Adam says he was shocked to see that kind of performance, Adam knows Kat deserves to go all the way with that performance; he knows she will beat the odds.

The person saved by America and moving on is Kat Perkins; Bria Kelly and Tess Boyer are going home having lost by a landslide of votes.