BY William Blesch on May 6, 2014 | Comments: 3 comments
Related : Uncategorized 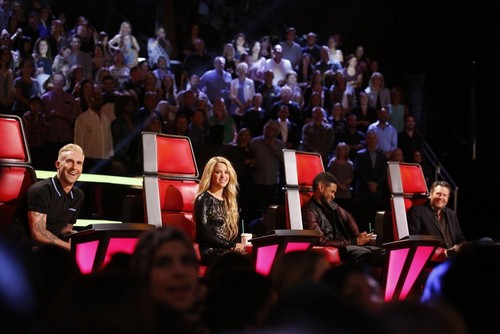 Tonight on NBC the Emmy award winning music competition The Voice will air its Live Eliminations, vocalists with the least number of votes are revealed. The contestants with the least amount of votes will perform one more time, with the winning singer advancing to the semifinal performances with the top vote getters.

On last night’s episode the top eight artists performed live in front of coaches Adam Levine, Blake Shelton, Shakira and Usher for America’s vote. The 8 artists remaining in the competition were: Team Adam – Christina Grimmie, Delvin Choice and Kat Perkins. Team Blake: Audra McLaughlin, Jake Worthington and Sisaundra Lewis. Team Shakira Kristen Merlin. Team Usher: Josh Kaufman.  Gwen Stefani and Pharell Williams were recently announced to be coaches next season and last night Pharell sang “Come Get It Bae” his brand new single and Gwen Stefani sang “Holla Back Girl”. Did you watch last week’s episode?  If you missed it we have a full and detailed recap, right here for you.

On tonight’s episode the artists with the lowest number of votes will be revealed and sing once more for the viewers’ sole Instant Save. The winning singer will join the top vote getters in the Semi-Final Performances.

Tonight’s Live Eliminations is going to be exciting. It will give viewers a good idea of who may actually be in serious contention to win THE VOICE this season so you’re not going to want to miss even a minute of the fun. We’ll be blogging it right here for you. In the meantime hit up the comments section and tell us your thoughts on the Live Eliminations.

The first artist moving on to the top 5 is Josh Kaufman from team Usher.

Shakira says that Kristen and her put in a lot of work; she wishes that it can prove to have been worth it and has faith that Kristen will be kept. Blake says he’s got a lot of confidence and says it’s hard knowing that one of his team members might have to leave tonight; he hopes it’s one of Adam’s.

The second person moving on to the top 5 is Kristen Merlin.

The third person moving on to the final 5 is Christina Grimmie.

Next up is Christina, Delvin, Sisaundra and Josh performing the song “Latch”.

The last artist saved by America’s votes and heading to the top 5 is Jake Worthington.

Delvin, Kat, Sisaundra and Audra all have a chance of going home tonight and will be singing for their life.

Usher says he that Sisaundra has an incredible voice, he couldn’t be more happy to hear her sing again; he doesn’t know what America will do. Shakira says it’s unfair that Sisaundra is up there, she is an amazing singer. Adam says it’s crazy, there is no bottom on the stage; all those that go home are still amazing artists at the end of the day. Blake says it’s shocking to see Sisaundra being at risk to go home; he hopes America saves her.

Next up is Audra McLaughlin singing “Done”

Shakira says that this is one of the moments where she has nothing to lose, she truly felt her fighting to be here and loves how fierce she is. Adam says that this season is surreal that these artists are having to fight, hearing her sing he believes they are some of the best and it will be a tough battle. Blake says that she did amazing and says it sucks that she is at risk of going home.

Next up is Kat Perkins singing “Baracuda”

Usher says that Kat was amazing and wanted to hit his button all over again to take her on his team, Adam says that he believes Kat is one of the best rock singers they have had on the show; he wants America to vote for her since nobody has sang rock like her.

Delvin is singing “For These Bright Eyed Honeys”

Shakira says that she is so bias, Delvin is one of her favorite and secretly roots for him the whole time; she believes he does nothing wrong on stage. Adam says that nobody in the galaxy sounds like Delvin, his has such a unique voice that doesn’t mean he belongs in the bottom four.

The last person moving on to be part of the top 5 is Kat Perkins.