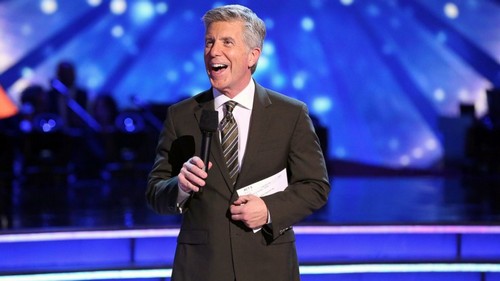 Dancing With The Stars returned last night with its Final Results Show of the season and by the end of the show we said goodbye to one more contestant. The three remaining contestants will battle it out tonight and by the end of the evening the winner of DWTS Season 19 will be crowned.  Did you watch last night’s performance show?  We did and we recapped it for you, HERE!  Did you miss any one the performances?  If you did we have all the videos HERE for your enjoyment!

After last night’s performances at the top of the leader board was Alfonso Ribeiro and professional dancer Witney Carson with an 80/80 and on the bottom of the leaderboard are Janel Parrish & professional dancer Valentin Chmerkovskiy with a 77/80.  The competition is really tight this season and it is anyone’s guess who will take the Mirror Ball Trophy.

The show will feature exciting surprises and kicks off with a high-energy all cast performance featuring a reunion of all 13 of this season’s couples, the judges and hosts. Then, as decided on by a Twitter vote, one of the four finalists will perform their Freestyle dance as an encore. Pop superstar MEGHAN TRAINOR will perform a medley of her catchy hit single “All About That Bass” and newest release “Lips Are Moving.” Additionally, the finale will feature musical performances by NICK JONAS, singing his hit single “Jealous,” and Grammy®-winning artist JENNIFER HUDSON and GORGON CITY, performing “Go All Night.” Then, with less than 24 hours to prepare, the three remaining couples will fuse two contrasting dance styles that they’ve performed this season into a new routine they’ll perform for judges’ points. At the end of the night, the public vote from Monday night will be combined with the judges’ scores from both nights to crown the Season 19 Champion and the winner will be awarded the coveted Mirror Ball Trophy.

Tonight’s episode is going to have all the usual glitz and glam in the ballroom, which you won’t want to miss. So be sure to tune in for our live coverage of ABC’s Dancing With The Stars Season 19 Final Results show and find out who the winner is of DWTS Season 19 – tonight at 9PM EST!

The three final competitors have performed and below are the judges comments/scores and videos:

Judges Comments: Len: “Yours is a Cinderella story, you came to the ball and never danced and you are leaving a dancing princess.” Julianne: “I hope you are so proud of yourself because we are proud.” Bruno: “Your charm always shines through.” Carrie Ann: “I love that you stuck to your game, you are an excellent role model.”

Judges Comments: Julianne: “That fusion was so seamless, I wanted it to keep going.” Bruno: “I love the way you both started and off you went, it was absolutely amazing.” Carrie Ann: “I am so happy this was your last dance, it was great, I am riveted by you.” Len: “You combine the how of the technique and the wow of the performance.”

Judges Comments: Bruno: “The amazing Alfonso, a real performer, you always give.” Carrie Ann: “I give you props Witney and Alfonso, you love to dance, you are like a glitter ball.” Len: “There is a naturalness about you – it has been like a wonderful story, we are on the last page and I still don’t know who is going to win.” Julianne: “Your connection is so on, you have done an amazing job.”

The RESULTS ARE IN

THE WINNER AND NEW CHAMPION OF DANCING WITH THE STARS