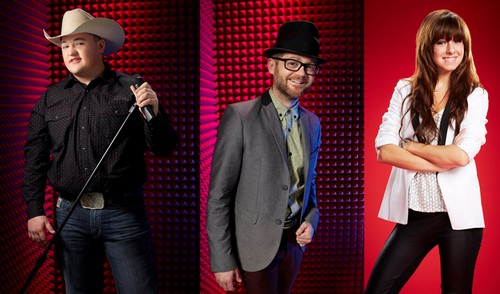 Tonight after a fantastic season it is the season 6 finale of THE VOICE and host Carson Daly will reveal who America has chosen to be the season 6 winner of The Voice by the end of the evening.

This season has been the singing reality shows best season ever.  The talent has gotten better, season after season and it is difficult to predict who will be chosen as the ultimate voice.  Last night the three remaining contestants Christina Grimmie, Jake Worthington  and Josh Kaufman had some incredible performances.  Did you watch last night’s show where the remaining three contestants brought their “A” game?   If you missed it you can check out our full and detailed recap, right here.

On tonight’s final result show one singer will be announced The Voice and the show will have an awesome lineup for the night that includes, “The Voice” Season 6 (2014) Battle Round 2’s mentor Chris Martin’s band, Coldplay. This will be the first time the band will be performing on the show’s stage. They are expected to perform a single from their latest and sixth album, “Ghost Stories.” Former “Voice” mentors Ryan Tedder and Ed Sheeran will also make a comeback during “The Voice” finale. Joining Ed Sheeran and Ryan Tedder’s One Republic during the gala night is country singer Tim McGraw.

Tonight on The Voice we find out who wins the coveted title and you won’t want to miss a minute of it. So be sure to tune in for our live coverage of NBC’s The Voice – tonight at 9PM EST and find out who is crowned the winner!   While you wait for our announcement, hit the comments and let us know who you are rooting for?

And here are the final results!

The artist in third place is Christina Grimmie, the artist in second place is Jake Worthington and the winner of The Voice 2014 is Josh Kaufman.