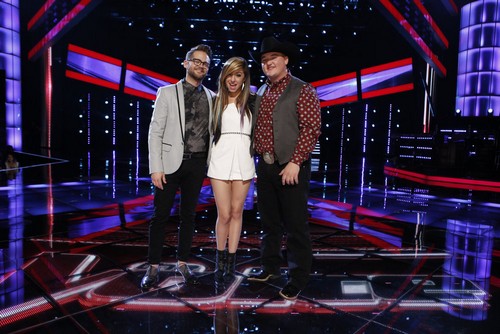 Tonight on NBC the Emmy award winning music competition The Voice continues with another new episode.  On tonight’s episode the final singers perform in the final performance show. The Top 3 will lay it all on the line tonight and your vote could decide who is crowned The Voice.

On last week’s episode the top four artists performed live in front of coaches Adam Levine, Blake Shelton, Shakira and Usher for America’s vote. The 4 artists remaining in the competition were: Team Adam – Christina Grimmie and Kat Perkins. Team Blake: Jake Worthington. Team Usher: Josh Kaufman.  Sadly Kat Perkins went home.  Did you watch last week’s episode?  If you missed it we have you covered, with a full and detailed recap, right here for your enjoyment.

On tonight’s episode the remaining three artists perform: Josh Kaufman, Christina Grimmie and Jake Worthington perform live in front of coaches Adam Levine, Blake Shelton, Shakira and Usher. America will vote to give their favorite artist a chance to win in the finale; one artist will be one step closer to being named “The Voice.”  Each contestant will perform two songs each. One of the songs will be selected by contestants’ respective coaches and the other one by America via online poll.  The night will also witness performances by the four coaches; Adam Levine, Shakira, Blake Shelton and Usher.

Tonight’s Live Final Performances is going to be exciting. It will give viewers a good idea of who may actually be in serious contention to win THE VOICE this season so you’re not going to want to miss even a minute of the fun. We’ll be blogging it right here for you. In the meantime hit up the comments section and tell us your thoughts on the Live Final Performances.

RECAP: First we see how our top three got to where they are, getting a look at Christina’s, Josh’s and Jake’s blind auditions and seeing the reason why they chose their coaches. We then see a complication of each of their performances leading up to tonight; where they have their last performances to then be voted as the winner of The Voice.

Christina Grimmie thanks America for having her back every week and she thanks them by singing the song Wrecking Ball by Miley Cyrus which she sang in the blind auditions.

Blake says that he is not surprised that America chose that song for her, he really feels like she can hit all the big notes perfectly; it’s the Christina he likes to hear and it was great. Usher says that song took him back when he tried to have her on his team; it’s been an incredible ride for her and believes it’s made her the amazing artist she is. Shakira says that every artist competing right now has different skills, but feels like Christina has the highest register; she knocked the song out of the park. Adam says that he is so proud of Christina and how she once again nailed the song.

Usher says he will always be with Josh and his journey with his career no matter what happens; they are singing “Every Breath You Take” by The Police. Josh thanks Usher for all his mentoring and help in his journey on The Voice; he’s honored to sing with Usher on stage.

Next up is Jake Worthington thanking America for being put in the top three and he will be singing ” Don’t Close Your Eyes” which he sang at the blind audition by America’s request.

Usher says it’s a pleasure to hear Jake sing all the time, he can’t believe he didn’t make it his first audition but got this far the second time; it was a great performance. Shakira says that Jake is way too cute and he has gained a lot of credibility with how he performs so perfectly with his song. Adam says that he loves Jake and believes that he has a memorable tone and he is an amazing artist. Blake says that he has so much respect for him, he thanks Jake for giving old country music a good name and doing it justice.

Next up is Shakira and Blake Shelton singing the song “Medicine”.

Next we have Josh Kaufman singing “Signed, Sealed and delivered” by Stevie Wonder chosen by America; the song that had him stolen by Usher and getting him this far in the competition. He is honored and thanks America for sticking with him.

Shakria says Josh has so much charisma in his voice, nobody could get bored listening to him and can’t believe he almost went home singing this song and thanks Usher for saving him. Adam says that Josh still makes him sad for not picking him, but he keeps twisting knife singing this same song again. Blake says it was awesome and loved how he sang the crap out of it. Usher says that Adam did a good job selecting such a good song and his idea of making Josh sing more soul and creating a new voice.

Adam says to Christina that they did it getting to the finals, he is thrilled for her and is so proud of her with all the song choices she makes; they are so bold. Adam and Christina are now singing “Somebody That I Used To Know”.

Jake said he is not nervous around Blake, it’s as if he’s home being with him; he feels like the coaches on the show never make them feel small. Jake says all he can do is work his best and hope he wins, Blake says he loves working with Jake because it’s like his little brother he never had. He gave him the song “Right Here Waiting” by  Richard Marx.

Usher says that he obviously didn’t get caught up into the theatrics of the stage, but felt it was spotless; the emotion and delivery of the song was the proof of him being a real artist. Shakira loves the country version of these songs, she believes that Jake is really singing amazingly well; showing off power she never heard before. Adam says Jake has amazing notes from when he starts and ends; it’s amazing and Jake has come such a long way. Blake says that after six seasons of being a coach on the show, he doesn’t believe there has been a more real singer; Jake engages all the listeners into the song.

Next up is Adam and Usher singing “How Does It Feel” by D’Angelo.

Next up we have Blake and Jake teaming up together for a duet, Jake is really hoping this isn’t the last time he works with Blake; Blake believes he is passing the baton to Jake with country music. They are singing the song “A Country Boy Can Survive”.

Next up is Christina Grimmie, she can’t even believe she is a finalist; she was so humbled to have four chairs turn for her. Christina says she doesn’t like playing safe, she loved doing that Drake song and was really happy with her performance. She is so happy to have Adam believe in her. Adam knows Christina is a warrior and she is singing “Can’t Help Falling In Love” by Elvis Presley; she has wanted to sing this song at the finals since the blind auditions.

Blake says that he has always admired Christina’s boldness to attack hard songs and love her take on Elvis, Usher says that she is such an incredible vocalist and is impressed she dared to take on that song. Shakira says that was flawless and was in completely awe, this wasn’t neither a safe or obvious choice; but that’s what makes her so unique. Adam says it was flawless and wanted her vocals louder; he loves how fearless she is and that she has decided all the songs she has wanted to sing. She truly deserves to win and Adam believes she will win The Voice.

Josh Kaufman is the last to perform tonight, he never thought he’d ever be in the finale; he was so incredibly nervous. He is so greatful for Usher stealing him in the battle rounds and feels like they have made a good connection now. It’s been a positive journey and hopes his last performance will be just as good; he’s singing “Set Fire To The Rain” by Adele, it’s his last big shot and wants to win this for himself and his family.

Adam says that he is super amazing, Usher says that throughout the process Josh wanted to represent soul and he truly does change the standard. He feels like Josh represented The Voice perfectly with that performance, he knows he is the winner.