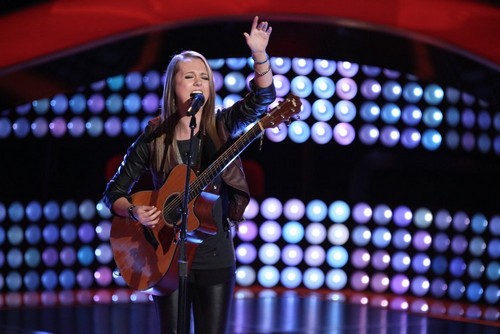 Tonight on NBC their Emmy Award winning music competition, THE VOICE returns with the second night of its premiere and the judges  Shakira and Usher, Adam Levine and Blake Shelton continue to look for artists to fill their teams.  Did you watch last night when the blind auditions premiere?  We did and we recapped it right here, for you.

On last night’s episode Usher and Shakira returned to battle with Adam Levine and Blake Shelton for the best new singers in America in the Season 6 premiere of The Voice.  They opened the show with a sizzling team performance of each of the judge’s songs, it was clear Shakira, Usher, Blake and Adam were all determined to pick the winner. Every artist who made a team last night got at least two chairs to turn around, which had the coaches fighting hard to sell the singers on picking them. There were three four-chair turns, always the most exciting moments of the blind auditions.

Our favorite performer from last night was  17 years old Bria Kelly and it seems the judges agreed with us.  Bria sang “Steamroller Blues” and she stunned the judges.  Usher said right off the bat that he believed they had heard, “The Voice.”  Usher brought out all the stops and even showed Bria his Grammy.  All the judges competed to get Bria on their team but at the end Bria decided to go with Usher.  CDL is predicting that Bria will do very well in the competition, she is one to watch.  If you missed her performance check the video below and let us know what you think?

Tonight’s “Season 6 premiere part 2” is going to be an exciting one, which you won’t want to miss. So be sure to tune in for our live coverage of NBC’s The Voice – tonight at 8PM EST! While you wait for our recap, hit the comments and let us know how excited you are about the return of The Voice.

RECAP: First up is Delvin Choice who auditioned last year and he is back again to see if he can make it this time; he is singing “A Soul For You” taking a less dance like song this time like the coaches told him to do last year. Delvin says he is back and is better prepared; being much more determined to be a part of one of the coaches teams.

Adam, Shakira and Blake turn around in the beginning; Usher turns around right at the end. Adam says he has become 20x the singer from last time; he could not recognise his voice at all and believes he could win the whole thing. Blake is blown away by how he controls his voice and loves his hair. Shakira says that he is the singer she has been waiting for. Usher says that he wants him to be great and help get to that point. Delvin chooses Adam to be his coach.

Next up is Madilyn Paige who has always loved movies and makes short films all the time; she has several siblings and they all love to sing and through movies she found out her love for singing. Her mother is very supportive and believes she will be great; Madilyn is singing “Titanium” and can’t believe she is singing in front of these coaches right now.

Usher hits his button first. Shakira then hits button as well. Usher says her approach was very smart to go aggressive with such a gentle voice and he believes he can take her a long way; Shakira says she is cute and has an amazing voice that is gentle but powerful. Usher says that he will remained invested with her the entire process and says he is her guy to win; Shakira is convinced that she can help her develop a lot. Madilyn chooses Usher as her coach.

Next up is Noah Lis and is singing “Me And Mrs. Jones” introducing a new style; he used to sing at events for free and now has been doing music for a living for over 11 years. Noah’s biggest influence was his grandfather who would always blast music that inspired him; he past away last year and Noah is doing this performance for him.

Adam and Blake both turn right at the end of his performance. Blake and Adam loved the hell out of his song choice; Adam says that Noah should be on his team without a doubt. Adam says it’s a little rough around the edges but should learn from it and he knows he can help guide him to get to where he wants. Blake believes says that he could rough it up a bit more and can help him perfect it. Noah says that he picks Blake to be his coach.

Next up is Keith Shuskie and he has a Rock and Roll type voice; he is in a rock band right now called Den of Lions. There are a lot of challenges to pay the bills so he is a medical assistant; it’s his dream though to be big in music and he really wants to work with the coaches. Keith is singing “Somwehere Only We Know”.

None of the coaches turned for him. Adam says his voice cuts in a weird way but it wasn’t dynamic enough; though he loves his fashion. Usher says that he has to come back next year because he has to pick a better song for himself to sing; Keith takes it as a learning experience and will grow his moustache even more.

Next up is Deja Hall who moved around a lot in her life and always had to make new friends but music has always been here for her; when she was born she had to have a kindey removed. Deja says she is very competitive and loves to prove people wrong; Deja is singing “True Colors”.

Blake and Shakira both turn around. At the end Usher hits hit button and turns around. Adam says she is a great singer and just didn’t hear one thing he wanted; he enjoys how Shakira gets so excited when she heard Deja. Shakira says she is so angelic with such a beautiful voice and can’t help but smile seeing her sing. Blake says he won the show with a 16 year old before and believes he can do it again; he even says he wants to adopt her. Usher says she did amazing and knows he can help her get that bigger notes with confidence. Deja decides she wants Shakira to be her coach.

Next is Cary Laine and she got married at the early age of 18 and is from a very small town with very few people; she has very few gigs because of the small place and wants to finally move forwards with music and is happy to perform in front of these coaches.

Adam hits his button right away. Blake and Shakira follow shortly after. Usher then hits his button. Usher asks if she would ever consider sneakers because boots look uncomfortable; Adam takes Cary’s arm and lets her sit in his chair. Usher is upset he didn’t think of that; Usher then lets her sit in his chair. Usher now tells Cary to look into his eyes, Shakira covers his eyes and he tells Cary to look at his lips; Cary says she is country and Blake says that he’s her man to win. Cary decides she wants Adam to be her coach.