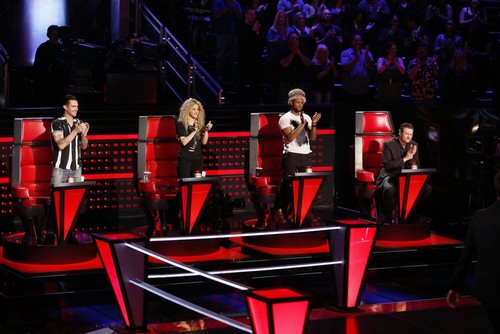 Tonight on NBC the Emmy award winning music competition The Voice is back with yet another round of completion. Tonight “The Battles Round 2 Continues.”  The battles round two continue – the coaches enlist Coldplay frontman Chris Martin to prepare their artists for the final round of battles.

On last week’s night’s episode it was  time for the new battle round, which was a tweak to The Voice that pits the artists against each other in a second duet for the right to advance to the live play-offs.  The coaches paired off their remaining team members, made the singers watch their first battle round performances and listen to some critiques, and gave each duo a list of three songs to choose from. The two artists agree on which song to sing and rehearse it with their coach and special advisor (and lead singer of Coldplay) Chris Martin. Just like in the first battle round, the artists perform and the coach declares one the winner and sends the other home. Each coach had one steal, so they will be sparing with them.  Did you watch last night’s episode?  We did and we recapped it right here for you.

On tonight’s episode The new second phase of “battle rounds” continue and the coaches enlist the help of music industry veteran Chris Martin. In this phase, the coaches pit two of their own team members against each other in a dueling duet of a song chosen by the artists. After the vocal face-off, each coach must choose which artist from their team is the strongest, and has the option of stealing losing artists from an opposing coach. Each coach has one steal during these intensified battle rounds.

First up is team Blake with his first pairing Biff and Sasaundra; he loves both of them and believes it’s going to be a hard choice, but they both sing the same genre. Biff and Sisaundra look at their song choices; they kind of decide to sing a song by James Brown called “It’s A Man’s Man’s Man’s World”. Blake feels like it’s a smart choice for both of them and that  they sound different but work so well together; Chris Martin feels like they are perfection and work really well. Blake feels like Biff needs to not try and copy Sisaundra on her notes; Chris feels like it should be brilliant and that James Brown would be proud of them.

Usher says that he has performed the song himself and that it is difficult to pull off; he is so amazed by Sisaundra’s high notes. He is amazed to see how well Biff too; he loves the two of them a lot. Shakira feels like Biff has a timeless voice and is a huge fan of his; though Sisaundra has a crazy voice. Adam feels like Sisaundra has a voice out of this world; he feels like Biff has a signature move every time. They both have an authentic feel in their actions and singing; Blake feels like they prove The Voice is the best singing show on television. He loves Biff’s style and that Sisaundra has an amazing voice. Blake picks Sisaundra as the winner of the battle. Biff says it has been a fantastic ride and appreciates everything he has experienced; Adam says he would have stole him if it weren’t for the fact Delvin is a soul singer on his team already.

Next up is team Shakira with Deja and Dendal; she lets them see exactly what they did in their next battle. Deja and Dendal decide to sing the song “Say Something” because they felt like the song genre would suit their voice very well; Shakira likes the choice. She feels like Dendal has a beautiful voice and it suits her very well; she also loves Deja’s angelic voice. Chris gets them a mic stand to use instead; Shakira feels like it’s going to be a very close battle.

Adam says that this song is so special and now see people performing it when it was actually first sung on the show; they are both different and loves the maturity in Deja’s voice. Blake says Dendal is so artistic but Deja drags him in. Usher doesn’t know who he’d choose; it’s all about taste and personally would pick Deja. Shakira loves them both and thinks that one of them has made more progress than the other; Shakira decides that the winner of the battle is Deja. Dendal says thanks to Shakira for having her and being able to have this wonderful opportunity.

The final pairing of the night is team Usher with Stevie and Morgan who are really good friends; Usher felt like they both had great voices and knows one of them will be stolen without a doubt. Usher gives them their list of songs to choose from; Stevie and Morgan choose the song “Story Of My Life” by One Direction. Usher says that it’s a song that represents them perfectly; Usher tells them exactly what to do to deliver their lyrics perfectly.

Shakira says that she really enjoyed it and didn’t know that Morgan has such a raspy voice; she felt like he could be a member of One Direction. She also thinks Stevie did a great job. Adam says that was a song sung by boys but men this time; he thinks it’s awesome and felt like Stevie would kill it against him but Morgan  really proved himself. Blake says he is impressed by Morgan and didn’t know he could do some things he didn’t know he could; Blake believes he would give it to Stevie though. Usher says that Morgan has a falsetto which he never knew about and that he knows he is still a student; it really impressed him. Though Stevie can really shock him with the tricky melodies; Usher decides the winner of the battle is Stevie. Morgan thanks Usher and that singing is new to him but he will make sure to work hard to do it for a living one day; Adam goes ahead and steals him right when he shakes his hand. Adam feels like there is so much potential hiding in Morgan and wants to unleash it all.