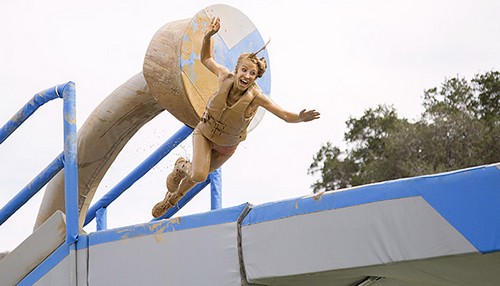 Tonight on ABC thier hilarious game show WIPEOUT is back with a new episode called, “Hotties vs Nerds 4.0.” On tonight’s show it’s hotties vs. nerds in a battle to determine whether looks or brainpower is superior.

On the last episode it was a battle royal of family vs. family, we had the all new qualifier round where our 12 teams showed off their suave snowboarding skills in “The Shred Zone,” where the slopes hit them. As the families continued on their quest for cash, they faced the first ever family version of Big Balls Bonanza, where a member from each team was chosen to compete in the challenge and the farthest jumper won $5,000 for his or her team. Did you watch the last episode? If you missed it we have a full and detailed recap, right here for your enjoyment.

On tonight’s show tape up your glasses and spray on your tan, our fourth annual edition of Hotties vs. Nerds on “Wipeout” is back again with 12 new hotties and 12 new nerds. These 24 contestants including, “Nordic Beauty,” “Sir Jock or Not” and “3-D Prince” will be dining at the “Robo-Bistro” and taking a trip to the outer orbit on “Space Race.” Our top 4 contestants will move on to face the Wipeout Zone, but only 1 will walk away with the cash prize and a spot to compete in the epic “Tournament of Champions” battle at the end of the season.

RECAP: This first person up is konwn as Claire Bear and she opens a door and is launched into a beautiful wipe out, next to the punch zone she gets blown away into the mud; now it’s up to the big balls where she fails on the second.Now on to the last part of the course she totally wipes out right at the end; almost making it. Claire Bear did pretty good.

Chris Park is our next contestant and he is prone to panic attacks, he throws up when he gets too nervous; he gets to the robo bistro though wipes out by smacking his face into the edge at the end yet he the best time of the day.

Next up is Courtney Turner, she is a huge fashions of both hosts, she is hit by the motivator on the big balls and launched into the water, next up to the robo bistro where like the others she just wipes out really fast.

Next up is Nathan a nerd who gets the best time of the day which is just under 3:30, being the best of the nerds and hotties.

Peter Kim who loves martial arts and has his own style called No Style, he gets to the robo bistro and gets smashed along the course; thought he finishes with an amazing time.

Next up it’s Dakota and he slips right at the beginning of the course wiping out incredibly fast; he then makes it to the doors and chooses the wrong one. He then gets launched away from the punch zone right at the end.

Next is Faith Hope and she was about to make the best time of the hotties; thought right at the end completely wipes out fast.

Next is Samuel Thomson who chooses a door and dodges the pie from the door knocker though falls out anyways; he then gets to the big balls though he gets really far on the big balls and was super close.

Next up is Eric Gever and he is a fan of building 3D models, he brings one of his own where he dominates the big balls; he gets to the robo bistro and flies off right at the end.

Next up is the Space Race, the nerds and hotties are going out one by one where they ay are trying to the end for a place in the next course. Courtney is the first to move on. Dakota is the next one going through to the next round and Samuel follows right behind; even Eric makes it to the next round. Faith Hope comes in from behind and takes the final spot.

Courtney, Dakota, Samuel, Eric, Brielyn and Faith are moving on to the next course.

Now we are at the Purple People Beater; 4 people in a row fail miserably to land on the platforms. Faith also gets slammed by the sweepers as she jumps in the air, Samuel miss steps and gets slammed in the face. Courtney makes it and is in the lead again; Courtneymisses the hole and fails. Faith also fails and she hits her back really hard. Courtney fails a second time thought makes it on her third!

Faith also makes it through and moves on and Dakota becomes the first nerd to move on; now there is only one more spot. Eric is the second nerd going on.

We have Courtney Turner, Faith Hope, Dakota Hinton and Eric Gever moving on to the final course.

First up on the final course is Faith Hope and she is blasted out of the cannon into the water; she falls right out of the shredder before even getting into it. Now she goes up to the sweepers but gets smacked right in the head instantly, now at the gears she falls instantly again; er timing isn’t looking good. Faith is now at the final platform at 3:32.

Second to the course is Dakota and he does a whole flip into the zone; he gets to the shredder and totally wipes on it. He now gets to the sweepers and is out in a second, to the final part of the gears Dakota wipes there as well. He actually beats Faith with 3:14.

Next up is Eric and he shoots out flailing his arms around; he hops into the shredder and is just sliding all around falling out of it in the end. Eric gets to the sweeper but falls down right away like everyone else, next up to the gears and wipes; he fails and Dakota still keeps the lead.

Last up is Courtney and right when she gets to the shredder she falls out instantly, now to the sweepers; she runs through and right near the end she completely wipes; now at the gears she wipes once again; thought she wiped on all the course she finishes at 2:18 being the winner this week.