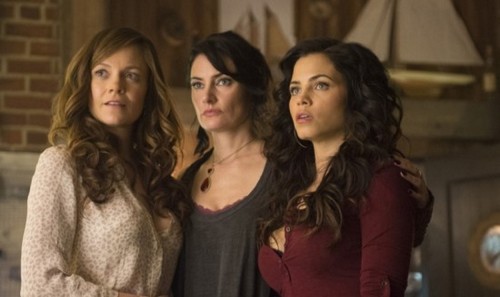 Tonight on Lifetime, WITCHES OF EAST END continues with it’s season two premiere.  On tonight’s show, called “A Moveable Beast,” season 2 begins with the Beauchamp witches fearing that a mystical presence crossed over to their world when the portal opened. Meanwhile, Victor helps Joanna recover from being poisoned; Ingrid develops a dangerous sleepwalking habit; and Freya sees visions of Killian in danger.

On the last season finale Mike took a dangerous measures to complete his plan. A mysterious professor with old connections to the Beauchamps tried to help Freya regain her powers. Killian made a decision about his future in East End. Mike revealed an interesting theory to Ingrid. Amidst wedding preparations, Dash tried to solve the mystery of the catacombs. Did you watch the last season’s finale? If you missed it we have a full and detailed recap, right here for you.

On tonight’s episode all the Beauchamp witches have trouble remembering exactly what happened after the portal opened and fear a mystical presence crossed over to their world. Victor helps Joanna fight what seems to be a losing battle with her argentum poisoning. Ingrid develops a dangerous sleep walking habit while Freya has visions of Killian in danger.

The show opens . . . ONE WEEK LATER (from where we left off last season). There’s a black cat walking through the woods, stalking a shadowy figure darting through the trees.

Meanwhile, Freya is mixing up a potion and chanting a spell.

In the bedroom, Freya’s dad has tied Joanna to the bed. He takes a dagger and slices her wrist with a dagger. Ingrid is sleepwalking through the hallway.

Back in the woods, the black cat takes human form. It’s Wendy.

Next, we learn that Victor is carrying out this strange ritual because it’s the only way to relieve her body of the deadly Argentum poison surging through her body.

Ingrid finds Freya and reveals that she’s sleepwalking. She ended up in the yard. Aunt Wendy returns home and says that she’s been stalking the figure that she thinks came through the portal that night under the estate. Wendy says that the figure is hungry, dark, and evil but that he or she is cloaking him or herself in some away. Before they close the portal, they need to discover who they’re dealing with.

The potion Freya was working on was a memory potion. They all drink, hoping to remember details about who — or what — walked through the portal that night. The memory potion did work somewhat; they all saw the shadow come through but couldn’t see a face.

Meanwhile, in the woods, we see a man with a scar on his chest. Next, a man is brought into the hospital. He’s bloody and says that something chased him into the woods and marked him with the “Mark of the King” –– the same mark that was on the unidentified man’s chest.

Freya has a vision of Killian. They’re in a dark forest with moonlight beaming through the trees. They run towards each other, embrace, and passionately kiss. Soon, Freya sees that Killian is bleeding, and then he’s lying on the ground dead. She returns to the real world.

Ingrid is working in the library. She’s going to be interviewed for a curatorial position at the university — even though she doesn’t have a PhD. Ingrid wheels her cart of books through the library. We hear growling. It seems as if she’s being stalked.

At the house, Joanna get emotional. She’s distraught that she can’t do anything to help.

Wendy visits the library to look for a book on medicinal herbs — she thinks she might be able to make a tea to help ease Joanna’s suffering. She encounters a man there who wants the book as well. They flirt a bit.

The family gathers in the garden for some food. Everything is going well — everyone talks about the joys and wonders of magic — until Joanna goes to make a toast and falls to the ground. Blood, tinged silver, leaks from her nose. The Argentum is taking her life.

In the house, Victor says that she had a seizure. Victor tells his daughters that this is normal for someone who’s undergone her situation. Victor also tells them that Joanna wants them to go about living their lives normally. When the girls leave the house, Wendy asks Victor why he’s lying to them. Joanna doesn’t have that much longer. Victor says that there might be a rare plant in the Amazon that could possibly save her life. If he leaves now, he can be back within three days. Unfortunately, he’s not sure if she has that long.

Meanwhile, the man who came into the emergency room is dying. Before he flat lines, he reveals as ominous prophecy: “Many more will die before the right one is found.” Dash begins compressions and, as he does so, he sparks a bit of life back into the person. Surprised by his display of magic — and conflicted by what he’s suddenly become — he backs away…and the man flat lines again.

In the bar, Wendy shows up with the Tarot deck in an effort to help Freya locate Killian. They conclude that he’s still alive — but that he might be in danger. Ingrid, alongside her assistant, cast a “fake” spell to help her get the job. The spell actually ends up working and she gets a call from the Dean right away; he tells her she got the curatorial position. She’ll be handling historical documents that concern witchcraft throughout history.

In her excitement, Ingrid dances on the barstool and falls to the floor. The EMTs show up. One of the EMTs just so happens to be the man who wanted Aunt Wendy’s herb book in the library. They have a flirtacious albeit tense meetup. Not long after that situation is dealt with, Dash walks into the bar.

Ingrid, Wendy, and Freya all agree: His aura has never looked darker. As Dash sits down with his hospital friends, he receives a call from a doctor at the hospital who’s reviewed the MRI scans that Dash took of himself at an earlier time — though he disguises the fact that the scans are actually of his brain. The doctor reveals that there was only one other recorded case of a similar brain scan. It belonged to a patient by the name of Ingrid Beuchamp, who visited the hospital when she was just ten years old.

Dash starts to wonder if, maybe, there’s more to the Beuchamps than meets the eye.

Back at the house, Joanna starts to accept her mortality and says that she’s finally ready to go. Wendy isn’t having this, and she says that she won’t let her go. Joanna says that all she’s ever wanted was for her girls to have a normal life and that, if she dies, perhaps her curse will die along with her.

There’s a knock on the door. Wendy goes to answer it.

It’s the hooded figure finally come to reveal itself. It’s a man, dark-haired and scruffy.

In the house, Wendy asks where he’s been all this time, as the portal’s been open more than a week. He says that his memory’s only just returned, that he’s been wandering around in a daze. Wendy, however, doesn’t trust him.

Wendy doesn’t trust him because he betrayed them all once in the past.

Frederick senses that Joanna is sick and recognizes that she’s poisoned with Argentum. He says he can help. He places his hands on her head and absorbs the poison. She’s instantly better. He says that, over the years, he’s built up an immunity to the poison — as his grandfather has poisoned him countless times. He says that he must sleep now.

Meanwhile, in the bar, Freya asks Dash where Killian might be. She says he might be in danger. Dash isn’t happy about this and says she has some nerve asking about the man who broke up their marriage/their love. He says, “You don’t want to mess with me. I swear you’ll regret it.” Before he leaves, he unintentionally hurls a bar table across the room (with magic). Freya looks on in surprise; she knows Dash has changed and has acquired some form of power.

Despite Frederick’s recent gift of life, Wendy’s still not sure if he can be trusted. Wendy tells Joanna that they can’t be sure how he’s changed — or if he’s changed — over the course of four centuries. Meanwhile, up in the bedroom, Frederick listens on with super hearing and the Mark of the King blazes into existence.

Dash receives an email. Or…more like blackmail. It says, “I saw you,” with a video of him attacking Killian with magic on the docks. It then says, “I’ll be in touch.”

Freya returns home and says that Dash has powers.

We see Killian in Santo Domingo. He’s won a lot of money by gambling. A young woman by the name of Ava comes into his bedroom. He’s overjoyed and says that it’s almost like he can read people’s minds. He thanks her for healing him, and she wonders when he’ll return home. He says, “There’s nothing for me there.” He lifts up the back of her shirt and we see a tattoo of an owl. The owl showed up when Wendy and Freya were dealing the Tarot cards. Wendy said that the owl was a “spirit animal” and could either be perceived as his savior or his destruction — as the owl can also be viewed as a deadly predator.

Before the episode ends, Ingrid sleepwalks through the woods. A strange, strange creature creeps out of the shadows. It begins feeding on Ingrid — with snakelike appendages the protrude from its body. The encounter is very sexual.