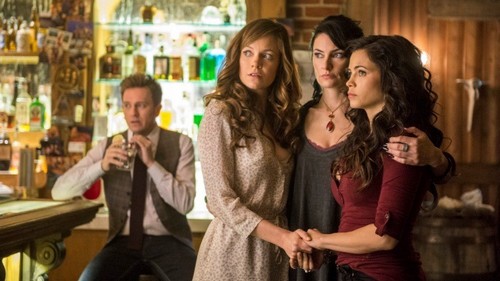 Tonight on Lifetime, WITCHES OF EAST END continues with an all new episode. On tonight’s show, called “Boogie Knights,” Freya relives one of her past lives with Killian. Dash does a spell at work without realizing the consequences.

On the last episode Wendy and Tammy went through a disastrous series of meetings. Meanwhile, Frederick’s old friends from Asgard made an unwelcome visit to Fair Haven; and Dash and Killian received their inheritance, which yielded some interesting results. Did you watch the last season’s finale? If you missed it we have a full and detailed recap, right here for you.

On tonight’s episode Freya relives one of her past lives with Killian. Dash does a spell at work without realizing the consequences. Joanna seeks the help of an old friend, Alex (Michelle Hurd). Wendy and Freddie work together to try and stop the Mandragora while Ingrid’s bond with it grows stronger.

Joanna is in mourning over Victor. He was the great love of her life and now that he’s gone – she had to make sure his spirit was free to travel. And so that explains why she was out in the woods late one night. She was doing a ceremony in honor of Victor and after she had finished she suddenly felt a second and more ominous presence out in the forest with her. It didn’t attack her (like it normally with other unfortunate that have crossed its path), but she knew whoever it was – was also dangerous.

Joanna later identified the creature as a feared beast from her native land, Asguard. According to Fredrick, his grandfather otherwise known as the mad king was able to eventually train these creatures and use them to act as his own vengeful army. And with this thing make an appearance on Earth – Fredrick then assumes, and even tell his mother and aunt, that his grandfather must have sent the creature after him. Although Wendy doesn’t really buy that story. She’s still apprehensive around her nephew and doesn’t trust him to abruptly start telling the truth.

Thought none of that seems to matter to Joanna. All she knows is that a dangerous beast is in her neck of the woods and just wants to find a way to kill it (no matter who sent him or what he wants)!

And while Joanna is worrying about what next she has to fight; her girls have craftily created their own methods at coping with the death of their father. Freya created a potion that would allow her to relive all of her past lives and so she’s using to recall all the times she’s met Killian over the centuries. It’s the only thing that can help her cope both with her loss and with Killian’s wife. Eva is in town and she and her husband are more annoyingly loved up than ever.

So Freya escapes into the past!

As for Ingrid, she’s been having Dash look into her health and on one of these visits she noticed something up with Dash’s hands. They were turning black. Almost as if he just did a spell. And she was right – he did. A patient of his, a child, died of cancer and he revived him. Yet there’s a cost to conducting such a spell and Ingrid was left in the uncomfortable position of having to explain it to her gun-ho protégé.

The kind of spell he did was called removing death and when that happens death has to go somewhere else and target someone else. This time it’s coming after Dash rather than someone he loves like it did with Ingrid when she was dumb enough to try a similar spell. If they can’t find a way to fix this then Dash is going to die.

But Freya probably won’t be all that concerned. Looking into her past lives has reminded her that Killian wasn’t the only man that kept being reborn for her. In all of her old lives, Dash was there and everytime he ruined things for her. He was always the driving factor that kept pushing her and Killian apart.

Then Freya learned something during her sojourn. She learned that she was never meant to be with Killian. They were created as star-crossed and that meant there was never going to be a happy ending with them. Learning that was hard but it also made Freya aware that she can’t keep holding on to a man that doesn’t want her. So she’s giving up on their love story just as his wife starts concocting weird potions of her own.

Joanna contacted an old frenemy of hers to help track and kill the creature. Though Alex informed her that there could be an easier way in killing this thing and that’s to find its mate. These creatures tend to find a mate to sustain their energy source. They technically feed off their partners during coitus which links them together in life and death. When she originally heard about the sexual part; Wendy couldn’t help cracking a joke about wishing she could do the same yet their situation isn’t so funny when they realized who this creature chose to mate with.

This thing is using Ingrid to feed himself and if he dies then Ingrid will die as well.

Ingrid had told Dash that he had to give death back to the little boy before it was too late for himself and at first he tried but he couldn’t go through with it after he ran into the little boy’s mother. She was so grateful for what he did to help that he simply didn’t have the heart to take her “miracle” away. But, again, he didn’t want to die. So he found a patient that was brought in and decided to give death to a man instead. From all appearances, this man didn’t do anything worthy with his life – he was a career criminal and so Dash didn’t even hesitate to kill him.

He actually felt justified. At least at the time though he quickly covered his tracks when it came time to report to Ingrid. He made her believe that he went through with returning the cancer to the boy and she was so worried about her sleepwalking that she didn’t second guess him.

Ingrid had asked Dash to watch over her while she slept. None of the test he did showed any abnormalities and so she thought a sleep study could finally be the answer. Then on the first night of the study – she woke up screaming and bleeding. Her arm was cut and she didn’t why.

Joanna, at that very exact moment, was just learning that killing the creature was going to be harder than she thought. She and Alex found his layer and she soon noticed that her daughter had there – she had found Ingrid’s shoe at the site and acting quickly she manage to stop Alex (funnily enough her one time lover so that explains the tension between them) from killing the creature before it killed her daughter.

But Ingrid isn’t herself. That thing controls her and took over when she was with Dash. It used its poisonous talons to attack Dash and then fled the house with Ingrid in tow.