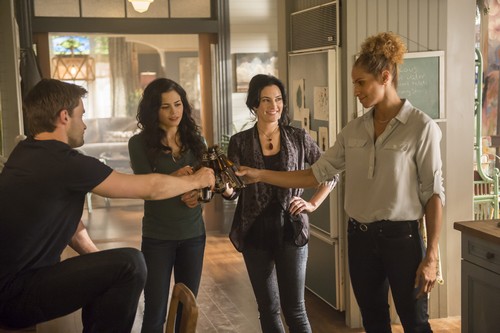 Tonight on Lifetime, WITCHES OF EAST END continues with an all new episode. On tonight’s show, called “When a Mandragora Loves a Woman,” Joanna and Alex try to put their past aside to focus on finding the Mandragora.

On the last episode Freya relived one of her past lives with Killian. Dash did a spell at work without realizing the consequences. Joanna seek the help of an old friend, Alex (Michelle Hurd). Wendy and Freddie worked together to try and stop the Mandragora while Ingrid’s bond with it grew stronger. Did you watch the last season’s finale? If you missed it we have a full and detailed recap, right here for you.

On tonight’s episode Joanna and Alex try to put their past aside to focus on finding the Mandragora. Meanwhile, Freya asks Dash to help save Ingrid; Wendy becomes wary of Freddie’s loyalty.

Joanna, Wendy, and Alex are trying to find a way to free Ingrid from the Mandragora but there are some serious risks that come with the potion. Namely the way it has to be injected – as in plunging the syringe directly into her brain. And knowing Ingrid, no matter what state she just happens to be in at the time, she’s going to put a fight. So in the end the entire family and a few of their friends had to be roped in for this particular endeavor. Because if they can’t disconnect their loved one from the creature in time then she’ll most likely die the same time as her “master”.

Unfortunately, the Mandragora isn’t just using Ingrid as a healing mate. It’s controlling her to do his bidding and that meant she delivered her friend and co-worker Hudson right into his clutches. Although for some reason the creature didn’t kill Hudson like he normally would. Instead he made the man sick and delusional with his venom.

And Hudson wasn’t he only victim. The Mandragora had attacked Dash earlier and poisoned him as well. Whatever it injected into Dash made him extremely volatile and due to some really bad timing on Freya’s part – she arrived at Dash’s house right around the time the venom started to do its work.

Fredrick says he knows how to cure Hudson but Wendy still doesn’t quite trust him to get the job done. Or at least the job he’s only claiming to do. However this time she has a right to be weary. At first her darling nephew claimed to have no knowledge of the Mandragora and then out of nowhere he knows how to cure its victims. It’s suspicious behavior!

So she told him to leave. Don’t bother trying to help anymore because no one ever really knows what’s the story with him. And by this point she had gotten tired of trying to find out even if it was for her sister’s sake! As far as she’s concerned, he betrayed them once and once was all it took for her to never trust him willy nilly again!

Though Fredrick wisely chose to stick around despite his aunt’s threats. He stayed just long enough to be there when Ingrid returned home. Their mother had given her the cure and yet Ingrid was still suffering. Being freed from the creature suddenly gave her all her memories back. She now remembers “feeding” the Mandragora and with their personal connection she can also recall all of his kills as if she was there herself doing the deed.

part 2/2 To say it left her disturbed would be an understatement. The body count alone is a lot to take in and even though Wendy tries to comfort Ingrid by saying none of it was really her fault that doesn’t change the fact she had to watch Hudson die.

She fed the creature and that had kept it alive to go hunting on people she’s come to know and love. So it really doesn’t matter what her aunt has to say – she knows all of the people that were killed since the creature showed up in town is her fault. Albeit indirectly. Hence she wants to destroy it before the killings begin again.

And that’s where Freya comes in. She needed the spell book at Dash’s house and the only way to get through him was to cure him like her mother cured Ingrid – a quick stab to the brain. Once that was accomplished – she dragged a very apologetic Dash back to the house in order to get his help.

Dash and Ingrid have grown very close over the past couple of weeks and when they got the chance to see each other again (semi-back to normal) – they were definitely “friendly”. So much so that Freya and Wendy were left feeling oddly confused. Like when did Ingrid and Dash become such buddies?

But there was no time to ponder that seeing as the Mandragora had arrived at the house looking for Ingrid. They had freed her from his trance yet they hadn’t freed her from her connection to the creature. So they still had one last spell to perform and that required setting Ingrid on fire. The fire was to destroy the connection and all it needed to work was complete stillness from Ingrid. Which wasn’t that easy with the Mandragora rattling the house in his best attempt at breaking in. So Wendy left to go handle the creature and surprisingly it was Fredrick that eventually had to come to her aid.

He found his aunt while she was fighting the Mandragora off and managed to kill the creature before it got the chance to hurt Wendy. Freya had already done her part by then so Fredrick knew he wasn’t going to harm his sister but that was a close call.

Joanna and Alex had been waylaid this entire time by the Mandragora’s venom and yet that little time alone helped them figure out their relationship. Joanna isn’t good at letting people in or at best asking for help when she knows she’s vulnerable. And because of that she had pushed Alex away. Similar to how she pushed Victor.

And now that they both realize that maybe Joanna needs time to fight some of her inner demons (most of which that can be laid on her father’s door) – it granted them the chance at saying goodbye to each other without any of the past resentment.

Joanna finally need to start grieving when theirs a lost and being happy when life appears to be good – it’s just sad that Wendy was right the whole time about Fredrick. He is in league with his grandfather!