Witches Of East End Spoilers – Freya And Ingrid’s Fates Revealed: Season 2 Episode 10 “The Fall Of The House Of Beauchamp” 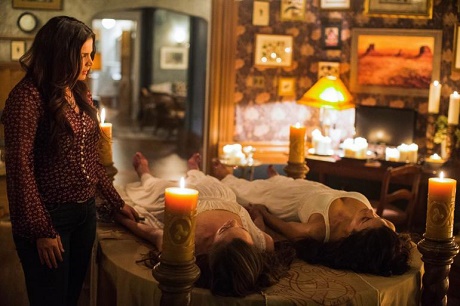 Have you been keeping up with Witches of East End, Lifetime’s popular supernatural romantic drama? We have! If you missed last night’s episode, please feel free to check out the full recap here. The season is really heating up and we can’t wait for next week’s episode.

On last night’s episode, we saw that Fredrick couldn’t go through with his plans involving Caroline’s body. He ultimately had a change of heart, despite knowing he’d inevitably face the wrath of Tarkoff, Frederick’s grandfather’s right-hand man. After Tarkoff gave Fred a brutal rundown, Fred ran to his mother, Joanna, for some help. Ideally, he should’ve went to her a long time ago, but he was caught between two worlds: His love for his family and his loyalty to his grandfather (and the mission that originally brought him to East End).

In the final moments of last night’s episode, Freya and Ingrid were both killed by Tarkoff — right before he himself met his supposed demise. It was a truly shocking scene to see both Freya and Ingrid dead, but part of us always knew this moment was coming.

So what can we expect on next week’s episode? Well, according to the episode 10 synopsis, it sounds like good ol’ Aunt Wendy will find a way to resurrect Freya and Ingrid — despite the consequences of summoning such dangerous “balance-upsetting” magic. Supposedly, someone powerful will be called upon to help perform the unnatural act.

Witches of East End season 2 episode 10 “The Fall of the House of Beauchamp”: “Still reeling from Freya and Ingrid’s murder, a devastated Joanna retreats to her bedroom, unable to face the reality that she’s once again had to watch them die and that the cycle will only repeat itself. Worried about her sister’s state of mind, Wendy is determined to bring them back, but knows the dangers of the spells all too well… and is forced to partner with the enemy. Meanwhile, Killian makes a startling discovery, and Dash’s secrets begin to surface.”

What do you think about this season of WOEE? Leave your thoughts in the comments section below. What will be the consequences for bringing both Freya and Ingrid back from the dead?