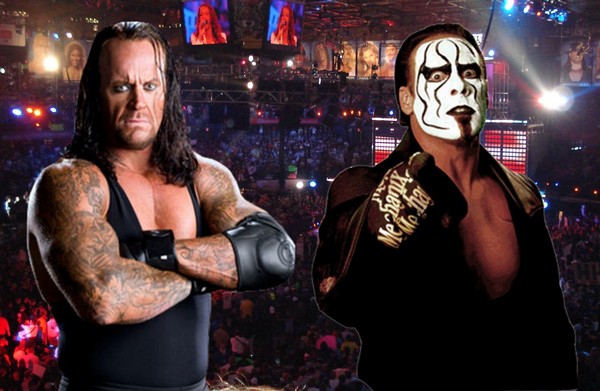 Every wrestling fan has an opinion about whether Sting and Undertaker would be a good idea at Wrestlemania 31. Some feel the match is no longer relevant with the advancing ages of each man. Sting is a youthful 55 years old while Undertaker is 49. Still others feel that at any age, Undertaker vs. Sting is a dream match that would make us drool. I am of the mind that Sting and Undertaker would bring the house down at Wrestlemania 31 and there are a number of good reasons why. Here are five of them in no particular order:

Sting has been active and is ring ready even at his age – Sting at 55 years old is still better than at least half the WWE roster and his ring rust would be minimal. He has been active in recent years and Undertaker has been largely rested for the last several himself. Undertaker comes back for maybe one or two matches per year the last several years and could certainly get in shape for a huge match like this.

Undertaker deserves a proper send off – Sting and Undertaker both would get a proper send off if they faced one another. I don’t want the final memory I have of the Undertaker to be him losing to the Beast to end the streak and I doubt any other fans want that either. Why not give them an epic match that leaves them both looking magical?

Sting has earned this last huge pop – The Stinger has been around for a very long time and has toiled in some pretty crappy circumstances. Although he had the chance to jump for the money, he instead did something that is far too rare these days…he stayed loyal to the folks that made him a star. Right down to the end he was there with WCW. Now, he is ready to step into wrestling royalty and get the stage he has deserved for so long. How do we not give him that?

Wrestlemania 31 would go over the top in records – If Vince McMahon wants to truly break some records and get some of that money back, he needs to book this match and make the crowd salivate. Slow build this match between now and then and the crowd will be desperate for the match by the time it gets here. Sting has that kind of drawing power and we already know Undertaker does.

The characters were made for one another – The dark and brooding Crow character that Sting portrays blends perfectly with the Undertaker’s character. How can you not enjoy the storyline possibilities? There are literally a million directions they could go and nobody would fully know what was going on from week to week. It could be must see television at it’s peak.

Sting and Undertaker needs to happen sooner rather than later. The match would be the most epic of all time.