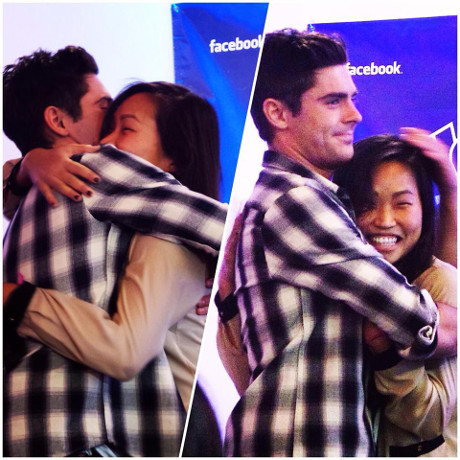 Zac Efron recently stopped by Facebook Headquarters to promote his new movie That Awkward Moment and, while there, he got some extreme love from one of the social media platform’s employees and longtime Efron Supporter. The connection Efron made with Kirby Koo was quite strong and it apparently left a lasting impression on Zac, who later wrote out a heartfelt message and attached it to the photo they took together, which he posted on his personal FB page.

Efron spills his emotional guts: “I have so much more I want to say. And I will- when I find the words. But I’ll start here- When you stood up, with such strength, and sincerity and gave me perhaps the nicest compliment I’ve been paid…it meant so much more than that to me. Facebook and online media in general, show only half the picture- sure people see me, but I never get to see them.

“Yesterday was the first time in a very long time that I was able to look into your eyes and remember why I do what I do- and will never stop. I needed that, more than you will ever know and just wanted to say thanks- face to face soon I hope.”

When Koo caught wind of Zac’s post, she immediately responded (of course she did). She said, “Zac, I am so incredibly touched by your note. Meeting you was always the dream, but I never could have imagined that you would respond with such genuine kindness and literally open arms. The impact you and your talent have had on me and so many millions of others should never be underestimated. Beyond the actor, thank you for being such a warm, generous person and I’d be humbled to consider you a friend.”

Um, I think Koo would be humbled to consider him as something more than a friend. Do we have to keep these two on our radar? Has Efron found love at Facebook? Chances are nothing more will come out of this adorable encounter . . . but you never know? Perhaps they’re a destined pair. Leave us your thoughts in the comments section below; we’d love to hear from you.