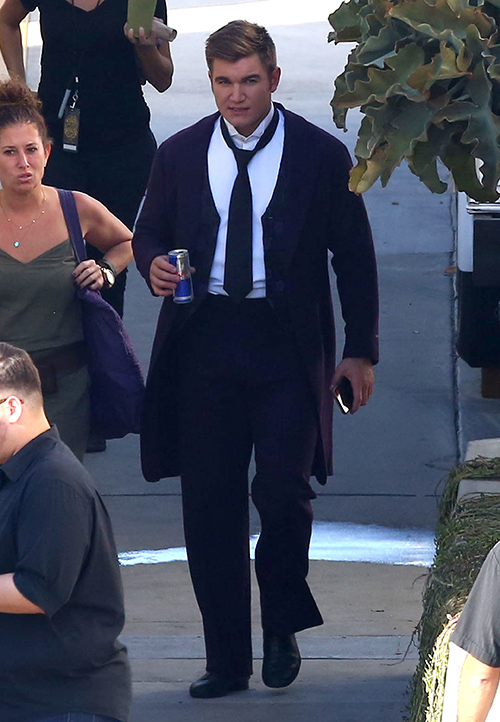 Dancing With The Stars 2015 spoilers tease that Alek Skarlatos is going Hollywood! One of the remaining four finalists, Skarlatos and his pro dancing partner Lindsay Arnold, seem to be scraping by every week with America’s votes – the international hero and war vet’s charisma is undeniable! Alek is far from the best dancer on Season 21 of Dancing With The Stars, but America has fallen in love with him! And Hollywood has too – according to a new report Lindsay Arnold’s partner just landed his first movie role!

TMZ is reporting that Alek Skarlatos was cast to play himself in a brief walk-on role in a new film starring Ron Jeremy. According to TMZ, “Skarlatos will appear in “Range 15.” It’s a military comedy also starring William Shatner and Danny Trejo. The role wasn’t a far stretch for Skarlatos … he plays himself in a short cameo. Sources tell us producers approached him shortly after the train attacks and he was so green to Hollywood he didn’t even know about Jeremy’s previous career.” We wonder how ABC feels about their Dancing With The Stars contestant appearing in a movie with a former porn star?

The odds of Alek Skarlatos winning Dancing With The Stars season 21 are pretty slim, but it looks like he could have a career in Hollywood ahead of him. America seems obsessed with Skarlatos, who rose to fame over the summer after he and some of his fellow war veterans thwarted a terrorist attack on a train while they were on vacation. This could be just the beginning of Alek’s movie career – who knows how many other TV appearances and movie roles he could book after his stint on Dancing With The Stars is over?

Are you as obsessed with Alek Skarlatos as we are? Do you think he has a chance of winning DWTS? Will you be checking out his guest role on “Range 15?” Let us know what you think in the comments below!