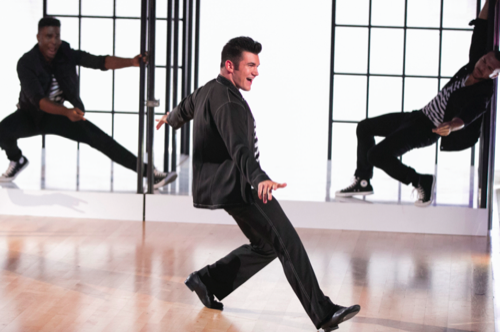 Tonight on ABC Dancing With The Stars returns for an eighth week and Alek Skarlatos and his professional dancing partner Lindsay Arnold danced an Contemporary routine to “Holding Out For A Hero” from Ella Mae Bowen. On tonight’s episode the seven remaining couples will perform an individual dance in tribute to influential figures in their lives. Did you watch tonight’s episode? If you missed it we have a full and detailed recap, right here.  If you missed any of tonight’s videos we have them, RIGHT HERE!

For the first time this season, the couple with the highest score from their solo dance will be granted immunity from elimination next week and will also receive 3 additional points. For the first time ever, each of the six couples that do not receive immunity will then be paired up to compete in a head-to-head dance-off to be voted on by America in real-time on www.ABC.com and the three judges. The couple with the majority of the four potential votes from each dance-off will earn an extra 2 points, increasing their overall score. At the end of the night, one couple will face elimination.

Judges’ comments on Alek’s Week 8 Contemporary: Bruno: “You were great, but you missed a lift. Overall it was really beautiful, you did well because those lifts were really difficult.” Carrie Ann: “It is about rising to the occasion and I think you did. I didn’t see a mistake, but I think you could have pushed him further.” Julianne: “You need to work with his strength, I would love to have seen more side by side. I wanna see that dancing, more combination, but it was still beautiful.”

Watch the video below and let us know what you think, do you agree with the judges comments? Do you think Alek did enough to avoid elimination tomorrow? Sound out in the comments and let us know your thoughts?