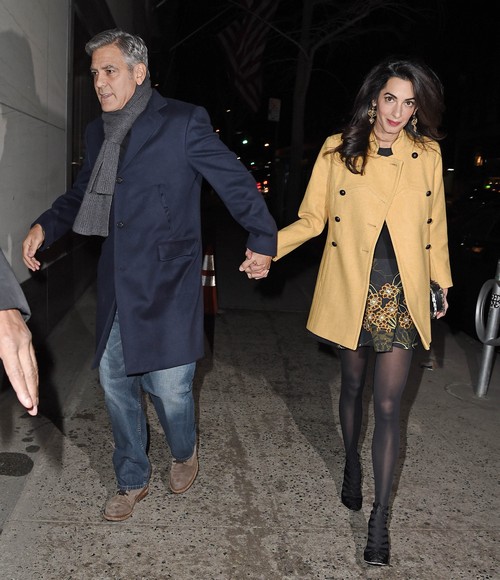 Rumor has it that Amal Alamuddin could soon land the Vogue cover and add model to her already illustrious resume. According to reports, Anna Wintour was spotted having lunch with Amal Alamuddin, which could mean that Anna offered her a Vogue cover model gig.

We already know that Anna is trying to fix Vogue’s image after putting those two nincompoops, Kanye West and Kim Kardashian, on the cover last year. Many, MANY people lamented the fact that even Vogue had gone budget and put a reality star on the cover, no matter how ‘influential’ Anna claimed Kim had become. Either way, we’d been hearing rumors that Anna wanted Kate Middleton for their next big Vogue cover, but let’s be real – there’s like a 2% chance of that happening. But Amal Alamuddin? Well, we’ve already seen that she’s not averse to going a little Hollywood now and then, and of course a Vogue cover would be enormously flattering to her. She would get to talk about politics and sound smart all day long, and she’d get photographed in beautiful clothes and flattering lighting. Why wouldn’t she say yes?

Plus, the public is still fascinated with Amal Alamuddin, and especially how mysterious she’s been, even after getting married to George Clooney. People want to know more, and so it’s really a win-win situation. Anna gets a UN lawyer featured on Vogue to try and restore some credibility, and Amal gets more famous. What’s to lose, right?

What do you guys think about Amal Alamuddin and Anna Wintour having lunch, and Anna maybe/possibly offering Amal the Vogue cover? Do you think that Amal would take the cover if she was offered? Or would she choose to say no, for fear of looking too much like a famewhore? I mean, it’s not like Vogue regularly features lawyers – however famous or beautiful – on their cover, right? Let us know your thoughts in the comments below.