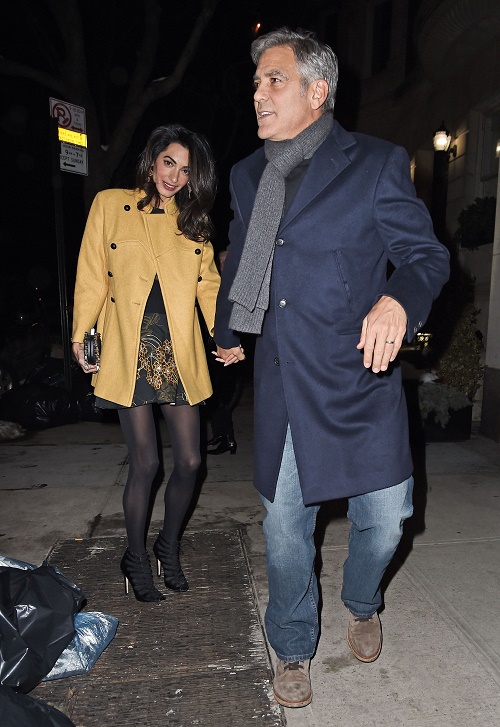 The feud between Angelina Jolie and George Clooney’s new wife, Amal Alamuddin, rages on. Angelina and Amal actually have a lot in common: their husbands Brad Pitt and George Clooney have been good friends for several years and both women have strong political views and specialize in humanitarian work. But it became clear in November 2014 when Angelina skipped Amal and George’s Italian wedding that the two women would not be scheduling any lunch dates anytime soon.

Over the years Angelina Jolie has built a name for herself in Hollywood as a humanitarian – and she doesn’t take kindly to other celebrities trying to steal her charitable spotlight. The March 30th edition of OK! Magazine reveals, “Angie has snubbed the British barrister once again. Since Amal accepted a visiting lecturer position at Columbia University she hoped that Angelina would meet up with her in New York, but sources say she has no such plans. Amal got Angelina’s information and reached out to her twice, but she never received a response. Amal was actually quite shocked by Angie’s rudeness and inconsideration.”

Amal may be shocked that Angelina Jolie snubbed her, but we aren’t. If there is one thing we have learned about Brad Pitt’s wife over the years, it is that she is incapable of being friends with another woman and has some serious insecurity issues of her own. Amal Alamuddin arrived on the Hollywood scene in 2014, and is giving Angelina Jolie a run for her money and was even named “The Most Interesting Person of 2014” by Barbara Walters. And when you take into consideration Amal’s college degrees and law career, she actually has one up on the actress. According to OK! Magazine’s sources, Angelina isn’t threatened by Amal, she just “finds her annoying.” We’re not buying it though.

Do you think that Angelina Jolie is threatened by Amal Alamuddin? Why else wouldn’t she want to get to know someone that she has so much in common with? Let us know what you think in the comments below!