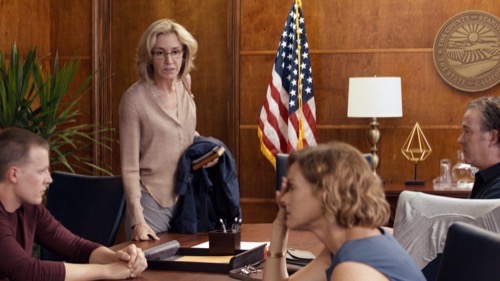 Tonight on ABC American Crime airs with an all new Thursday April 2, season 1 episode 5 called, “Episode Five,” and we have your weekly recap below. On tonight’s episode, Carter and Aubry are reunited after his release, but she convinces him to make a run for Canada to keep him from facing trial and a possibility of the death penalty.

On the last episode, Russ and Barb’s youngest son, Mark (guest star David Hoflin), arrived in Modesto in support of his estranged parents. At the same time, the families of both victims began to lose control of their emotions as they heard that Carter’s defense team had been granted a bail hearing due to new information. Carter’s sister, Aliyah, made it clear to Carter that he had to follow her conditions and stayed away from Aubry, whose parents pressured her to attend an NA meeting. Meanwhile, Tony was processed out of juvenile hall on a probationary release and into Alonzo’s care. Did you watch the last episode? If you missed it, we have a full and detailed recap right here for you.

On tonight’s episode as per the ABC synopsis, “Carter and Aubry are reunited after his release, but she convinces him to make a run for Canada to keep him from facing trial and a possibility of the death penalty. Meanwhile, Mark tells Barb about his fiancée after Matt’s funeral in Oakland; and Alonzo tries to repair his relationship with Tony.”

Tonight’s episode of American Crime kicks off with Ross arriving at the bloody crime scene – he sees the blood smeared across the walls and rotten food and he gets choked up. He heads to the closet and picks out a suit, they take it to the morgue so that the mortician can prepare the body for the funeral.

Carter is in court before the judge – she is reading to him the stipulations of his parole. After he agrees to them he heads out of prison and is a free man. Meanwhile, Alonzo is at church with his kids – he tells his son that he has a surprise for him and he got the car back from the police. His son snaps at him that he is stupid, and the last thing he wants to see is the car that he got arrested in.

Carter’s sister Doreen shows him his new apartment, she says that he can rest tomorrow and then he has to go to work at the majestrate. He rants that he doesn’t want to do paperwork for them – she reminds him that is where his bail money came from and his apartment came from. Carter begs Doreen to start acting like his sister, not the person that she has become since she got married.

Aubry is laying in her room and reading a magazine – she has been sober for eight days now. Her dad says that Ruth and Bryan want to see her, she rant that they are the last people she wants to see and corrects him and tells him that they are not her family. She asks him if she can borrow the car to go to her meeting. He tells Aubry that he will do her one better and rent her a car to use while she is on probation for the next six months.

Hector’s lawyer meets with him in prison, the DA has come to offer a deal. They want Hector to testify, but they can’t promise him that he won’t be deported. He snaps at the DA that if they want him to talk they are going to have to come back and show him something real. Hector growls that he “doesn’t do nothing for free.”

Aubry lies and says she has an AA meeting – and then she heads straight to Carter’s apartment. They reminisce about the first time they met at the bar. Carter whispers in her ear about the first time he saw her and then they fall in to bed together. Afterwards Aubry lies down with him and drinks a beer and laughs about how much of a dope her father is for thinking she is sober. Carter rants about his sister Doreen and how she thinks that she can save him. He reassures Aubry that they have nothing on him, and he doesn’t need to be saved.

Ross and Mark head to the cemetary to plant flowers at the grave. Mark leaves with Barb and she rants in the car about how foolish it is to have separate services. Mark complains that their family is never going to be a normal family.

At home Tony makes a phone call – he tells the kid Luis on the other line that Edgar told him to call and he owed him money. Luis shows up and drops off $100 for Edgar. Luis says he missed Edgar – he invited Tony to come hang out with him and his cousin and Tony hops in the car and leaves with him.

In Carter’s apartment he wakes up and Aubry has a plan. She wants to take the rental car that her dad got her and drive to the Canadian border, she cant stand the thought of him waiting to be executed for a crime that he didn’t commit. Aubry wants to go to Canada and hire coyotes to smuggle them in to Vietnam because they don’t have an extradition treaty with the US. Carter thinks that she is insane and high again, Aubry denies it and says that she just loves him and doesn’t want to lose him.

Tony goes out to eat with Luis, he rants to him about how much he hated juvie and how everyone looks at him funny now. Luis gives him a pep talk about “being smart in the streets.” He tells him that he will get him a piece of his action, but he cant tell anyone or talk to the police. Meanwhile back at his house Tony’s dad is meeting with the pastor form the church. They are kicking him out of the Sunday mass, the pastor says that the other church goers feel uncomfortable around his family. Tony’s dad is welcome to come a different day of the week – just not on Sunday’s.

Carter and Aubry are on the road to Canada, he is skeptical that her plan will work. She reassures him that she did all of the research on the internet while he was in prison, and she saved up some money. Aubry tells him to stop stressing her out and grumbles that she needs to stop and get another beer.

Mark stops by his mom Barb’s house, he reveals to her that he has had a girlfriend named Rachelle for over a year now and they are getting married. Barb is shocked and demands to know why he has kept her a secret, he confesses that she isn’t white and he didn’t want to tell her because she is always talking about Blacks and illegals. Barb is stunned and tries to deny being racist, she says that she wants to meet his fiancée.

Tony’s little sister Jenny is walking home from school – three guys stop her and start harassing her about her brother Tony and what he did. Jenny tries to ignore them and keep walking and one of the guys jumps her and beats her, they leave her laying on the sidewalk.

In the car Carter yells at Aubry for drinking and driving. She throws the beer can out of the car and she begins tweaking out and crying that they need to go back to Modesto so that she can get money from her dad and get drugs, she needs a fix. Carter tells her that they cant go back because people will be looking for him. After hours of arguing they pull over, Aubry lies down in the backseat and shakes while Carter dries them all the way back to Modesto. When Aubry gets out of the car she tries to kiss Carter and he turns away from her – she runs in the house and hits Michael up for money. She says she needs $500 to buy a dress. He can tell that she isn’t clean, but he gives her all the money he has, $87. Before she leaves with the money Michael tells Aubry that everyone wants her to clean up and come home.

Aubry takes Carter with her to her drug dealer Stevie’s house – Aubry sits down on the couch to snort the drugs and another guy walks in to the room. He starts screaming to Stevie that Carter is the one who jumped him and ripped him off. Stevie begins punching Carter and Aubry jumps on his back and slits his throat with a razor blade – Carter is in shock as the blood splatters his face. He and Aubry run out of the house and drive to a motel. Carter still hasn’t spoken, he climbs in the bathtub to rinse off the blood. Aubry rambles about how everything always works out for them, she stole all of the drugs off the coffee table before she ran out of the house. Carter grumbles that she killed him. Aubry doesn’t want to hear it, she says that she is having a party with or without him.

Aubry overdoses, Carter panics and calls 911. The paramedics arrive and begin working on Aubry – police officers arrest Carter and drag him out of the room. In the cop car Carter begs to know if Aubry died…the cop won’t answer him.