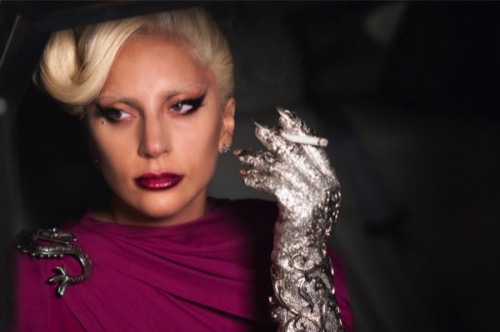 Tonight on FX our favorite creepy drama American Horror Story: Hotel airs tonight with an all new Wednesday October 14, season 5 episode 2 called “Chutes and Ladders,” and we have your weekly recap below. On tonight’s episode a fashion designer, Will Drake, spruces up the Hotel Cortez.

On the last episode in the season premiere, detective John Lowe investigated a series of murders in Los Angeles, and a peculiar tip indicated the Hotel Cortez as a place of interest. Did you watch the episode? If you missed it we have a full and detailed recap right here for you.

On tonight’s episode as per the FX synopsis, “Fashion designer Will Drake spruces up the Hotel Cortez; a model gets the attention of the Countess; and John learns about the hotel’s first owner.”

Tonight’s episode of “American Horror Story” kicks off inside the hotel – Sally is in her room and she has one of those creepy sewed up mattresses. The junkie that was raped last week has been sewed inside the mattress – he wakes up and Sally kisses him and then stuffs his head back inside the mattress and sews it close again. Meanwhile, down in the basement the little blond kids are all sucking the blood out of the remaining captive in a cage. One of the kids complain that the blood tastes bad – Iris realizes that the girl is dead and tells the kids to stop sucking her blood. Liz Taylor helps Iris clean up the dead girl’s body – they toss her down in a laundry shoot – where several other bodies have been thrown.

Detective Lowe is still checked in to the Hotel Cortez. Meanwhile, his wife Alex is carrying on with her regular routine. She makes a house call and checks in on a little boy named Max who has the measles. She takes Max’s mom aside and tells her that it is all her fault – she should have gotten him vaccinated. Later that night Lowe wakes up in the Cortez and swears that he sees his son again, he starts frantically chasing Holden through the hotel and shouting his name – eventually he loses him. Sally finds him in the lobby and asks him who he is looking for.

Lowe is obviously bamboozled, she reassures him that the Cortez I “batshit crazy at night.” Sally offers him a drink, mocks the fact that he is barely hanging on to his sobriety, and then has Cleopatra make him a ginger ale at the bar. Sally manages to completely weird out Lowe, and then she gets him to tell her about the last time he had a drink and what happened that day. Lowe explains that he was working a double homicide. Lowe starts talking about his children and tells Sally about the day that his son Holden was kidnapped at the beach.

John heads to work the next day and there is a package waiting for him – its from the Hotel Cortez. He shouts at everyone to exacuate the building and has the bomb squad come down to chek out the package. They clear the package and tell John that it is safe – and he is going to want to take a look at it. Inside of it is some sort of gold trophy – with blood on the end of it.

John heads back to the Cortez with his daughter – there is some sort of party in the lobby, and Naomi Campbell is there to see the fashion show. John’s daughter insists on watching, and she gets to sit with Will Drake’s son Lachlan. The Countess takes her front row seat with Donovan, meanwhile no one will let Sally in and she is screaming that it is not fair because she lives there. A male model named Tristan Duffy is getting ready to walk the runway – and he is high as a kite.

Halfway down the runway he stops and kisses someone on the audience – and then slaps her boyfriend. He falls picks up a broken bottle – and the Countess is in love at first sight. Donovan is obviously jealous that she is so intrigued by Duffy. He heads backstage and shouts at Tristan that he needs to get his self together. Tristan takes the broken bottle and slices his face and announces that he is done with modeling.

After the fashion show, Donovan finds Duffy ransacking his room looking for coke – he swears that he can smell it. After they get in a fight, Duffy continues wandering through the hotel and searching other rooms. He stumbles in to Mr March’s room – he reveals that he used to be just like Duffy, and he had fortune and fame too … but he lost it all. He offers Duffy a drink, but he turns him down. Mr. March has a girl tied up in his bed – he gives Duffy a gun and tells him to pull the trigger and take the woman’s last breath. Duffy refuses and says that Mr. March is crazy – March takes the gun and shoots and kills the woman right in front of Duffy. He panics and runs out of the room and hops in the elevator – where The Countess is waiting for him.

Meanwhile, Lowe’s daughter saw her brother Holden at the hotel. The next day she snuck back to the play room to see Holden – he refused to leave with her and said that he liked it at the hotel. She takes a picture with him, and then runs out of the room when he leans in to bite her neck. On her way out of the hotel she runs in to Sally – Sally scares her intentionally and grinds her teeth and spits out blood on the floor. Lowe’s daughter runs down the hallway screaming for bloody murder.

Scarlet returns home, Lowe and his wife are freaking out because she was missing from school. Scarlett tells them that she saw Holden at the hotel – her dad starts screaming at her that Holden is dead. Scarlett shouts that he is a liar and runs in to her room and slams the door. Lowe takes out Scarlett’s phone and looks at the picture – you can see Scarlett in the picture but Holden’s face is blurred out.

Meanwhile, back at Cortez Duffy and The Countess are having a marathon sex session. Throughout the night, she gives him the perks of having “the virus.” Basically, they drink blood, but they don’t have fangs, they have a supercharged immune system, but they can die. The sun won’t kill them, but it is not good for them. The Countess warns Duffy that there are only two rules, he can’t get wreckless and he can’t fall in love. She reveals that she was born in 1904 and Duffy is amazed that she has lived through so many years – she says that the 1970s were her favorite. Donovan walks in on them and he is not happy – he snarls to the Countess that Duffy won’t last a week as one of them.

Down in the lobby, Lowe shows up freaking out – he puts Iris in handcuffs and demands to know what in the hell is going on at the Cortez. Iris convinces him to take the cuffs off from her and promises him that she will tell him everything he wants to know as soon as they get a drink at the bar. Lowe and Iris sit down and Cleopatra pours them a drink.

Iris explains that it all began with Mr March – he built the Cortez in the 1920’s. It was a perfectly designed torture chamber with secret chutes to hide bodies – walls were lined with asbestos to mute the screams. People walked in and just vanished. Mr. March killed about three people a week, and never got caught. Eventually the police catch on, and Mr. March’s loyal minion Mrs. Evers runs to his room and warns him. Mrs. Evers volunteers to “go first.” And has Mr. March shoot her in the head with a gun. Then he slashes his own throat.

Lowe doesn’t believe anything that Iris is telling him. She tells him that if he wants to know what is really going on – then he is going to have to expand his thinking a bit. Lowe snarks that “people do enough damage without the help of the after life.” Lowe walks off, and as he is leaving Iris warns him that Room 64, the room that he is staying in, was Mr March’s office.

Back at his office, Lowe has a DNA test run on the bloody trophy. The DNA matches their first victim – Gamboa, now they have a murder weapon. Lowe decides to start researching Mr. March, the police were trying to connect him to a bunch of unsolved murders. He thinks that someone is carrying out murders based on the 10 Commandments. Someone has picked up where Mr. March left off.

Tonight’s episode ends with Duffy killing his first victim – a man. He takes him back to the room and The Countess watches on as he kills him, and then they have sex on his dead body.