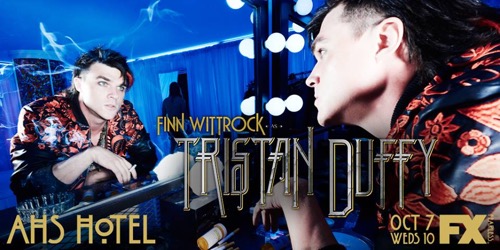 Tonight on FX our favorite creepy drama American Horror Story: Hotel airs tonight with an all new Wednesday October 7, season 5 premiere called “Checking In,” and we have your weekly recap below. On tonight’s episode in the season premiere, detective John Lowe (Wes Bentley) investigates a series of murders in Los Angeles

On the last episode The Freaks rebelled against new management. Dandy prepared for his debut performance. Elsa arrived in Tinseltown. Did you watch the episode? If you missed it we have a full and detailed recap right here for you.

On tonight’s episode as per the FX synopsis, “in the season premiere, detective John Lowe investigates a series of murders in Los Angeles, and a peculiar tip indicates the Hotel Cortez as a place of interest.”

Tonight’s episode is going to be another spooky one and you won’t want to miss it. So be sure to tune in for our live coverage of FX’s American Horror Story – tonight at 10PM EST! While you wait for our recap, hit the comments and let us know if you are excited about season 5 of American Horror Story!

Tonight’s episode of American Horror Story: Hotel kicks off outside of Hotel Cortez – two women are dropped off by a taxi. They head inside the creepy hotel and ring the bell numerous times – finally Iris meets them at the front desk and asks if they have reservations. They want their deposit back – so they can get a different hotel. Iris laughs that there are no refunds and shows them to their room – on the way there she informs them that there is no WIFI.

After Iris leaves, one of the girls heads down the hallway to get some ice. On the way she notices a creepy little boy – and then he disappears. She also passes a maid, who is scrubbing a bloody mattress. She gets back in the room and her friend is freaking out because of the smell. She calls the front desk and asks for another room – there aren’t any available. The girls uncover the mattress, and see that it has been sewed shut. They slice the mattress open – and a demon starts crawling out of it.

Iris apologizes for the inconvenience and moves the guests to another room – she tells them that they have to stay at the hotel until the police arrive so they can give their statement. Eventually the girls fall asleep. Around 2:00 AM an alarm clock goes off – one of the guests wakes up and can’t find her friend. She opens the bathroom door and she is lying on the floor dead, and two young kids are sucking her blood.

The next morning police are called to a crime scene in a wealthy apartment complex. John scopes out the crime scene, a man and woman were having sex and someone speared them together. The man is still alive, but someone cut out his eyeballs and tongue. John heads back to his office, and begins working on the Martin Gamboa case – a man that was tortured and murdered. The murder weapon was never found, but whatever it was also was used to sexually torment him and left gold paint chips in his rectum. He thinks the case he saw today might be related to martin Gamboa. John’s daughter calls and interrupts his work – he video chats with her and reads her a book before bedtime.

John receives a mysterious phone call – a man on the other end of the line says that he is the killer and he is staying at the Hotel Cortez. He says that he will kill again if John doesn’t come for him. Meanwhile, at the Cortez Iris is checking another guest in to the same room that the two girls were just murdered in. The guest heads to room 64 and begins shooting up – it isn’t long before he is high as a kite, and a demon storms in and begins raping him. Sally begins tormenting him, and tells him to say that he loves her. He says that he loves her and the demon stops raping him, and then he passes out.

John arrives at the Cortez, he tells Iris he wants to see Room 64 ASAP – she has Liz Taylor take him in the elevator up to the hotel room. They arrive at Room 64, John pulls his gun and heads inside. The room appears to be completely empty. Little does John know, the druggies that was just raped is shoved under the bed. John lies down in the bed and passes out – the alarm clock goes off at 2:00 AM again. John opens his eyes and sees a little boy standing in his room, he chases him down the maze of hallways and loses him.

The Countess and Donovan get dressed up for a date night and they head to a movie in the park – they pick up another couple while they are there – and they bring them back to Hotel Cortez for an R-rated foursome, After some foreplay, The Countess and Donovan slice their playmates necks open and begin drinking their blood, and having sex with each other in the middle of the murder scene. Afterwards they share a cigarette and The Countess calls for housekeeping.

John heads home, his wife rant that he is late as she rushed out the door for work. Meanwhile, at Cortez Iris heads down in to the basement where the two blond girls that checked in to the hotel are still apparently alive. She has them locked up in cages – Iris rants that they are drug addicts and have been polluting their bodies. She makes them smoothies out of oysters and livers – and then she force feeds them through tubes. Sally shows up and rants that Iris is being too harsh to the girls. Sally thinks that if she is this miserable – she should just leave. Iris scoffs that she is “done with her bullshit.”

She tells Sally to feed the girls herself, but if she does it wrong then it is her responsibility to explain to the Countess why they “still taste like shit.” Sally lets one of the girls loose and tells her to run. She makes it all the way to the lobby and runs in to the Countess, who slices her throat and kills her right in the middle of the lobby. She tells Iris that “this can never happen again” and walks off.

John takes his daughter out for sushi. She tells him that she has been having dreams again – she asks her dad if he remembers what Holden looks like when he is awake. John’s phone starts going off while they are eating – it’s a text from his wife. He rushes to the address that she texted him and finds a cop car in his driveway. He tells the cop to watch his daughter and then he runs in the house. Meanwhile outside, the cop hears something rattling in the bushes and runs off and leaves John’s daughter alone in the car.

Inside the house, it is dark – John is chasing someone through the house. The killer called him from his wife’s phone and said that he “did it again.” John hears his daughter Scarlett screaming – he races upstairs and finds her staring at two men hanging from the ceiling – disemboweled. John’s wife gets home, she is perfectly fine – they have no idea how the killer got a hold of her cell phone. John’s wife is having a meltdown, she is afraid that the killer is going to come after them again. She thinks that she and Scarlett should go to New Hampshire to stay with her sister for a while.

At Cortez, a real estate agent shows up with a man named Will Drake – Iris is confused the realtor says that Will is the new own of the hotel. Iris grumbles that “nobody tells her shit.” Will heads up to the penthouse with the realtor – Donovan is lying on the couch naked. He demands to know who they are and what they are doing in his room. The Countess arrives, apparently she was expecting Will, she tells him that he can’t wait “to see what he does with the place.” While the realtor is giving Will the rest of his tour, The Countess takes his son Lachlan for a walk. She shows him a secret passage in the hallway – it leads to a huge game room with kids in it and a candy dispensary built in to the wall. One of the kids in the room is John’s son Holden – he invites him to play video games with him.

Flashback to 1994: Iris is Donovan’s mother – the first time they arrived at the hotel was when Sally brought Donovan there to get high. Iris followed Donovan there – and she found him passed out on the bed overdosing. Sally stumbled out of the hotel room, and refused to call 911 after Iris told her to. Iris chased after Sally, and then pushed her out an 8 story window and she fell to her death.

At John’s house, he slips in to his daughter’s room and says goodbye to her while she is sleeping –then he leaves his wife and heads to the Cortez to check in.