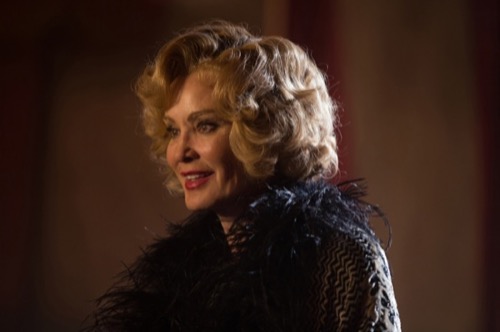 Tonight on FX our favorite creepy drama American Horror Story: Freak Show starring Jessica Lange and Kathy Bates continues tonight with an all new Wednesday January 21, season 4 finale called “Curtain Call,” and we have your weekly recap below. On tonight’s episode the freaks rebel in the Season 4 finale. Meanwhile, Dandy prepares for his debut performance.

On the last episode Dandy gave the Twins troubling information about Chester. Maggie vowed to prove her loyalty to Jimmy. The Freaks enforced their harsh code of justice. Did you watch the episode? If you missed it we have a full and detailed recap right here for you.

On tonight’s episode as per the FX synopsis, “The Freaks rebel against new management. Dandy prepares for his debut performance. Elsa arrives in Tinseltown. Written by John J. Gray; directed by Bradley Buecker.”

A giant banner featuring Dandy Mott is unveiled. He’s going to do a singing act. Penny is sad that they are “selling” out to Dandy’s money but Paul assures her that they need to stand by him, as his resources will help them eat.

Meanwhile, Dandy’s preparing for his show. He freaks out when Paul informs him that the show hasn’t sold any tickets. Dandy says that it’s all their fault, and he goes on about how the show needs a new kind of freak to attract attention. Eve punches him in the face and he falls down. Paul informs Dandy that he will never be one of them, that he will never be a freak, and spits in his face while he’s down on the floor. Paul says, “We quit.”

The freaks all exit the big tent, leaving Dandy crestfallen and clearly out of sorts. However, knowing Dandy, he won’t accept this defeat easily.

Elsa walks into the offices of the World Broadcasting Network to meet with the president, but the secretary says that she, like yesterday and the day before, does not have an appointment. Elsa swears that she will wait all day until the president leaves. The day passes and everyone leaves. The secretary gets up to leave. Elsa asks where the president is, that she didn’t see him leave. The secretary says that he left out the back door in order to avoid her. Elsa, furious, slaps the secretary across the face. The security guard grabs her. Elsa starts crying. A man comes out to save her. His name is Michael Beck — Vice President of Casting.

Dandy goes through camp shooting everyone — all the freaks — he can find.

In her trailer, Desiree hears the gunshots. Eve grabs an axe

Dandy goes into Desiree’s trailer but he can’t find her; she’s hiding. He grows furious when he can’t find her. He approaches a closet, thinking he’s found her location, but before he can find Desiree, Eve attacks him. Dandy manages to shoot her in the knee, and then in the head. Eve’s dead.

Desiree is still on the loose.

Dandy returns to a tent where the twins are tied up. He asks them to come with him.

Jimmy returns to camp looking for everyone. But nobody is there. He goes into the big tent and sees the bodies/piles of dead freaks. Desiree comes up behind him and gives him a giant hug; they cry together.

The twins walk into Dandy’s play room in a wedding dress. The hall has been decorated with white and fancy wedding decor. Dandy kisses Bette and they are married. Later that night, they dine together. Dandy says that they are going to have the best lives together. The new maid comes in and pours him a drink. The maid is Desiree, and she’s spiked his drink. Dandy finally catches on. Bette and Dot finally reveal that it’s all be an act, and did he really believe that they would spend a happy life together after he murdered their entire family. Soon, in walks Jimmy. They’re all here for some well-deserved revenge. Dandy passes out.

Dandy wakes up chained in Houdini’s Escape Tank. The twins, Jimmy, and Desiree prepare to kill him — in as theatrical a way as possible. Before Desiree turns on the water to drown him, she says, “You may look like a motion picture dream boat, but let me tell you something honey. You the biggest freak of them all.”

The twins, Desiree, and Jimmy take their seats to watch the show. Desiree chomps on some popcorn. The tank fills up with water, slowly. Soon, Dandy drowns. Chained, he floats in the glass tank. Lifeless.

Throwing a kernel of popcorn into her mouth, Desiree says, “That boy is a star.”

In the end, I guess Dandy got what he always “wanted.”

A news program unveils the Hollywood Walk of Fame. Elsa’s getting a star herself. Elsa is the star of her own TV show. Elsa is now married to Michael Beck.

She’s filming an instant coffee commercial when she blows up at the writers for giving her inadequate lines. She retreats to her dressing room. The PR lady for the network comes in to discuss the Halloween show. But, as her past freak show tradition dictates, no performer is to act on Halloween.

Later, Massimo comes to visit Elsa. She says that, even though she’s gotten all she’s ever wanted, she’s no longer happy. She wants to runaway with him, as she desires to be with someone she loves most – but he informs her that he’s dying.

Later that night, the head of the network comes to tell her that her past film – the one wherein she loses her legs – has surfaced and will be reported on by a magazine. It’s too be published soon. Next, the president informs her that all the freaks from the freak show she used to run (which she neglected to tell them about) were murdered. She’s upset by this; this was her family.

The president says that they will be ending her contract with the network. Before he leaves, she says that she will perform on Halloween. “Might as well go out with a bang,” she says. Of course, as a freak show performer, she knows the dangerous of performing on Halloween.

The Elsa Mars Halloween Spooktacular show begins. She goes out onto the stage. She sings a song.

Desiree is walking past a TV store with her family and sees Elsa performing.

Jimmy is in his home with his pregnant wife — or wives. He’s with the twins.

Elsa continues to perform when the ghost who collects those who perform on Halloween comes for her. But she says that her plays in not with them.

On set, Elsa falls over. To onlookers, it looks as if she had a heart attack, or some normal event — as nobody else can see the ghost freaks.

Next, Elsa appears in her cabinet of curiosities — where all her freaks are thriving. She appears to have found her heaven, filled with all her freak family. Ethel is there, too, and she forgives her for all the things she’s done.

She goes on stage to perform. A crowd awaits her with applause. In death, she’s become a star.