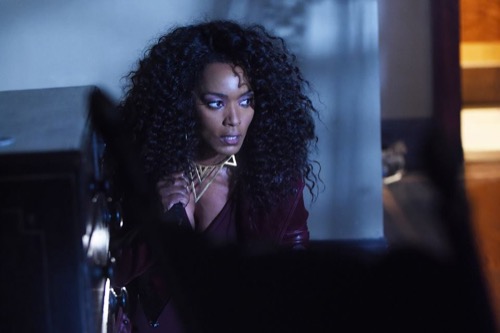 Tonight on FX our favorite creepy drama American Horror Story: Hotel airs tonight with an all new Wednesday November 11, season 5 episode 6 called “Room 33,” and we have your weekly recap below. On tonight’s episode Ramona and Donovan (Matt Bomer) enact their revenge plan.

On the last episode Alex used an odd treatment to save a patient and Iris was tested by a couple that hated Halloween. Did you watch the episode? If you missed it we have a full and detailed recap right here for you.

On tonight’s episode as per the FX synopsis, “Ramona and Donovan enact their revenge plan; Liz Taylor finds true love; and the resident of Room 33 is revealed.”

Tonight’s episode of American Horror story kicks off with a flashback of The Countess, formerly known as Miss Johnson, she’s outside of a mansion in 1926. The Countess knocks on the door, a doctor answers – apparently she has come for an abortion. She opens her coat and reveals a huge baby bump and tells the doctor that she is “only 3 weeks along.” The doctor leads The Countess in to the basement and has her climb on an operating table – he removes a baby boy from The Countess while she is passed out, and the baby kills the Dr’s nurse. The Countess wakes up, and he hands her the baby and tells her “congratulations.”

John Lowe wakes up in the middle of the night (again) to Holden standing over him and giggling – he makes a run for it and John jumps out of bed and follows him down to the empty swimming pool full of coffins where the children sleep – and he spots his ex-wife Alex sleeping in a coffin too. He collapses on the floor and appears to have passed out.

Meanwhile upstairs, Duffy is making love to Liz Taylor – which might be the oddest couple ever. After they have sex, Liz has presents for Duffy, books. Duffy jokes that he hasn’t read anything in years that didn’t have Kim Kardashian on the cover. Liz spits some wisdom for Duffy, about love. Then, Duffy demands to know if Liz loves him. He confesses that he thinks he is in love with Liz. They talk about how excited they are to see each other in the lobby of the hotel every day. Liz breaks down in tears, he feels guilty about betraying The Countess and hooking up with Duffy behind her back.

The Countess is a little busy right now, she is trying to seduce Will Drake – but he can’t get an erection. Will admits that only guys turn him on, he likes girls, but for some reason they don’t arouse him like guys do. The Countess isn’t bothered, she texts Duffy and calls him upstairs to help her out with Drake. He jumps out of bed with Liz and promises to keep their relationship secret for a little bit longer, then heads upstairs with Countess and Drake.

Downstairs in the lobby, Alex comes to Liz Taylor for help – she says that John found her and the kids sleeping downstairs. She gave him a couple pills to keep him knocked out for a few hours, but she knows that he is going to go look in the sleeping chamber as soon as he wakes up. Liz helps her move the coffins. Then, Alex goes upstairs and wakes Joh nup and tells him that he has been having visions again. John insists that it was real and Holden woke him up and took him to an empty pool full of coffins. She tells John that he is having a psychotic break and he needs to get real help. John runs down to the basement to see for himself – sure enough the pool is empty and the coffins are gone.

Meanwhile, Ramona and Donovan are still out for revenge on The Countess – they arrive at the hotel. Ramona’s plan is to kill The Countess’s beloved and creepy blond babies, she sends Donovan upstairs to “sniff the Countess’s panties” while she goes to the pool. Of course, the pool is empty because Alex and Liz just moved the coffins. Iris shows up to help Ramona kill The Countess’s babies, she sneers that they are her reasons for living and she can’t wait to take them away form The Countess. Ramona tells Iris to find the babies and take care of them – Ramona says she is “going to Room 33 to take care of The Countess’s other reason for living.” Ramona arrives in Room 33 and crawls around looking under the furniture and calling out to Bartholomew – who is apparently The Countess’s unaborted baby.

Bartholomew puts up quite a fight, and he escapes from the room. Liz Taylor arrives at Room 33 and realizes that Bartholomew escaped. He tells Alex to find the baby ASAP, before The Countess realizes he is missing. Liz heads back down to the bar and has a drink with Ramona, who is covered in scratches after her scuffle with Bartholomew. Apparently, Liz and Ramona were BFF’s. Liz tells Ramona all about his boyfriend Duffy, Ramona knows that he is The Countess’s new boy. She warns Liz to leave Duffy alone and run or else The Countess will rip his heart right out of his chest.

Meanwhile, Alex is upstairs searching the rooms and looking for Brtholomew. Instead she finds the twins in their room, with a dead body. They found a hotel guest in the hallway and took him back to their room and seduced him. He thought they were prostitutes. The twins cry to Alex that they killed him because they were sick of walking the hallways and they were trying to find their purpose. Alex has a new purpose for them to try out. She says that she “knows a guy who has always wanted two girls.”

John overhears a murder called in on his scanner, he runs to the scene of the crime but they won’t let him in because he was fired. John is convinced that it is another Commandment murder. His old partner sends him home, and tells him that they already have a suspect in custody. Later that night Liz finds John sitting in the hallway drinking out of a bottle – he’s obviously wasted. Liz tries to help him in to his room, but John screams at him to leave him alone. Liz walks off and then the two twins find John and take him back to his room to have a threesome which turns in to a blood bath.

John goes running downstairs naked and covered in blood, Liz Taylor taunts him and asks him how his breakdown is going. John goes back upstairs – the twins are alive and perfectly well, they speak to each other in another language about how they are driving John literally crazy. John kicks everyone out of his room, and then the ghost of Mr. March starts taunting him. John rushes and gets in the shower to wash off his blood and while he is bathing – Bartholomew slips in to his hotel room. Later that night John packs his bags and leaves Hotel Cortez.

John heads home, and picks up his daughter Scarlett from her friend’s house. Scarlett complains that her mother Alex was supposed to pick her up two days ago – and forgot about her. John is obviously concerned, but notices something moving through the house – it’s batholomew, he snuck in John’s bag. John pulls his gun out and starts firing at the demon baby, and scares Scarlett.

The Countess returns to the hotel from a trip with Will Drake. She notices that Liz Taylor is acting anxious. Liz sits down with The Countess and tells her that she is in love with Duffy. The Countess scoffs that she doesn’t share, but agrees to have a talk between the three of them.

The police arrive at John’s house after shots are fired, they call Alex. Alex has the police take Scarlett to her grandma’s house – then she tells John to go inside and go to sleep. She promises him that everything will be fine now that he has left Hotel Cortez. John heads inside and then Alex begins searching around the back yard for Bartholomew.

The Countess heads to Room 33, Alex is sitting in there rocking Bartholomew. She tells The Countess that he got out and lost a little bit of blood, but he is going to be just fine. The countess gets emotional and thanks Alex for saving her son. Alex leaves and they finally show the baby’s face – which is not much of a face, basically just an eye and a mouth.