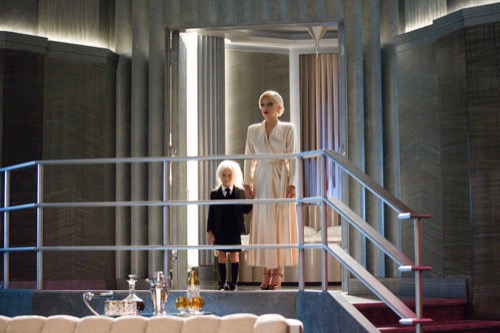 Tonight on FX our favorite creepy drama American Horror Story: Hotel airs tonight with an all new Wednesday November 4, season 5 episode 5 called “Room Service,” and we have your weekly recap below. On tonight’s episode Alex (Chloë Sevigny) uses an odd treatment to save a patient.

On the last episode John got invited to a Devil’s Night Soiree and Alex tried to diagnose Holden’s odd condition. Did you watch the episode? If you missed it we have a full and detailed recap right here for you.

On tonight’s episode as per the FX synopsis, “Alex uses an odd treatment to save a patient and Iris is tested by a couple that hates Halloween.”

Tonight’s episode of American Horror Story: Hotel kicks off with John’s wife Alex in the bathroom at work trying to get herself together – she looks like death, she was just turned by the Countess. And, apparently she is an amazing employee and is still going to work at the hospital. She checks in on her measles patient Max – they think that his phneumonia is turning in to staff, and they want his mom to sign a DNR. Alex promises Max’s mom she will figure it out, and then heads to the blood storage room and drinks a few bags of blood. She heads back in to Max’s room and injets a syringe of her own blood in to his IV.

Donovan pays the Countess’s ex Ramona a visit – he has brought along his mother Iris. He says that she is the inside man that they need to take down the Countess. Meanwhile, Iris is sitting in a chair twitching, she doesn’t look too good. Donovan convinces Ramona that the Countess stole their lives – and now they have to steal her’s. Iris cries that the Countess is going to kill her when she realizes that she was turned. Donovan and Ramona reassure Iris that the Countess won’t notice because she never pays any attention to her.

Back at the hospital, Max has made a full recovery. Everyone is shocked that he is up and running around – his mother thinks that it is a miracle, she thinks Alex for saving his life. Alex says that Max can go home now – they just have to get the paperwork ready for his discharge.

Iris returns to the hotel – she is sick and shivering. Liz Taylor demands to know where she has been and scoffs that Iris “looks like shit.” Liz sits her down at the bar and gives her some of the Countess’s stash of special blood. He warns her that she is going to have to feed on fresh blood soon. Iris whine that she is damned to eternity in her old body, she is going to be stuck watching reruns every night until the end of time.

There is a serious situation – Max has turned. After he ate his parents for breakfast and killed them, he put on a pirate’s costume and put himself on the bus to go to school. By recess, he will be feeding on his classmates. Alex tells his friends that he almost died at his class Halloween party. Alex and a girl sneak in to the supply closet together. The little girl, Madlyn, leans in to kiss Max and he bites her lip. Alex turns Madlyn, and then stabs his teacher and tells her to drink the blood to make her stronger.

Then Alex goes in to the classroom and proceeds to turn all of the kids. There are about 20 vampire kids roaming the halls – the teachers put the school on lockdown and the SWAT team arrives. The cops don’t realize that the kids that are covered in blood are actually the killers and they bring them all out safely and hand them over to their parents. Madlyn tells the cops that one man dressed in black had a mask on his face – he cut their teacher with a knife. All of the other kids lie and tell the exact same story.

John Lowe is at the police station – he is trying to explain what happened with the serial killers at the Halloween party, the Captain thinks that he has lost his mind. John thinks that they drugged him, but swears that there is a clan of killers posing as serial killers and recreating their crimes. He screams that March is the 10 Commandment Killer that he has been searching for. He wants a warrant for the hotel – he swears that all of the answers are there. John doesn’t get the warrant, instead the Captain fires him, he thinks he has completely lost it.

At the hotel, Iris is checking in new guests, and trying hard not to kill them and drink their blood. Afterwards, Duffy and the Countess stop by the front desk – Iris is nervous and jittery. They can tell that something is up with her, she insists that she is just a little on edge because it is Halloween. The new guests call Iris at the front desk and order pate, Liz helps her dump cat food on a plate for them. Meanwhile, they bond and Liz tells her when he became a crossdresser and how he met the Countess in 1984.

After a pep talk from Liz Taylor, Iris heads up to the hipster’s hotel room – they complain because she didn’t bring any romaine lettuce with their pate. The woman starts ranting about how horrible the service is at the hotel is – Iris snaps and murders both of them with a corkscrew while she sobs about how they have no idea what her life is like, and then she proceeds to drink their blood.

Lowe wakes up in bed at the hotel and finds scratches all over his body, and then he realizes that he is lying next to Sally. He jumps out of bed and demands to know how Sally got in to his room. She reminds him that he practically dragged her up there – John has a flashback and sees himself having sex with her. He shouts at her to get out of his room, she calls him a “prick” for kicking her out and insists that it was real between them. John insists that he doesn’t remember sleeping with her, Sally scoffs that he is a liar and then informs him that they are going to keep having sex again and again because it is their destiny before she leaves the room.

In the laundry room, Liz is helping Iris clean up her bed bath, they toss the bodies down the laundry chute and then proceed to drink the hipsters’ wine. Iris is thrilled, she cheers with Liz and says that she never knew how to live until she died.

Alex stops by the hotel, the Countess gives her a dress to wear – Holden is thrilled that his mommy is just like him now. The Countess says that Alex is their new governess, and she will look after all of the kids – as long as she plays by the rules. Alex accepts the job offer, but she is concerned that she is going to run in to John, the Countess hints that simply slitting John’s throat will solve all of their problems and then she sends Alex and Holden to bed. Alex cuddles up with her son inside his coffin and watches him sleep.