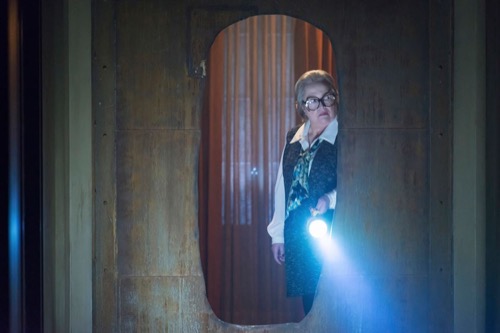 Tonight on FX our favorite creepy drama American Horror Story: Hotel airs with an all new Wednesday November 18, season 5 episode 7 called “Flicker,” and we have your weekly recap below. On tonight’s episode Will Drake’s (Cheyenne Jackson) renovations uncover a great secret.

On the last episode Ramona and Donovan enacted their revenge plan; Liz Taylor found true love; and the resident of Room 33 was revealed. Did you watch the episode? If you missed it we have a full and detailed recap right here for you.

On tonight’s episode as per the FX synopsis, “will Drake’s renovations uncover a great secret; John undergoes psychiatric evaluation; and the Countess learns the fate of her first love.”

Tonight’s episode of American Horror Story Hotel kicks off with Will Drake’s construction crew hard at work on the hotel. They hit a steel wall and begin drilling away at it – only to find a long hallway on the other side. They make their way down the hallway, and there are two vampires waiting for them – and the vamps look like they haven’t gotten a drop of blood in centuries. The vampires massacre the construction workers, and then head upstairs to kill Will Drake’s clueless real estate agent.

John Lowe is at the West Los Angeles health center. The doctor is trying to determine how insane he really is and asks him to count backwards by 7’s – he fails miserably and she continues to question him. Out in the lobby, John’s wife Alex is trying to convince him to stay at a “more comfortable” mental hospital, but he is happy at the West Los Angeles health center. He sits down with another doctor and unloads all of his problems. John talks about the Commandments killer – apparently he snuck back in to the police station and wound up attacking his old partner.

Iris brings The Countess down to the hallway – she shows her the dead construction workers. The Countess has no idea who could have killed them, it is obvious that she is rattled. Iris is surprised, she has never seen The Countess scared of anything before. Meanwhile, the vampires are sucking every drop of blood out of the real estate agent upstairs.

Flashback to 1925 – The Countess is an actress on the set of movie. The is playing the part of a concubine – one of the actors, a man named Valentino, has taken a liking to the Countess, he gives he a note and asks her to meet him after they are done filming. The Countess heads to his house later that night. He invites her in for a romantic dinner, and then his wife Natacha arrives and it gets awkward. The Countess wants to leave – but Valentino convinces her to stay, Natacha wants to play with her.

The Countess and her friend Giddy head to a party later at the Cortez. Mr. March makes speech about the grand opening of the hotel – while they are there, a messenger arrives and says that Valentino is dead. The Countess stumbles out of the party and stands on window ledge and ponders committing suicide. Mr. March grabs her and pulls her back in to the hotel, saving her. He comforts The Countess and says that he is never going to let her go … literally.

The Countess heads to Valentino’s grave to pay her respects, she bumps in to Valentino’s wife Natacha. She demands to know why Natacha didn’t go to the funeral – and she scoffs that Valentino didn’t die. Valentino arrives and says that the body in the grave is his stunt double. The Countess is furious, she thought that Valentino was dead, so she married Mr. March so that she could be surrounded by beautiful things. The Countess didn’t really love Mr. March, but she was drawn to his darkness. She walked in on him one day and found him killing a hobo. She told Mr. March that the next time he killed – she wanted to watch.

Valentino explains to The Countess that he had to fake his death so that he could “be preserved” by the German movie director. The German director taught him about beautiful creatures that had a blood virus that was incurable and gave them permanent life. He invites The Countess to run away with him and Natacha and live forever too, she happily accepts.

Meanwhile, back at the hospital – John is wandering through the hallways and he meets a little girl named Wren. She reveals that she knows the Commandment killer and she was there during all of the murders – Wren describes them in detail and John believes her. John tries to reassure her that whatever the killer made her do – it wasn’t her fault. Wren isn’t buying it, she insists that she is the reason that the Commandment killer murdered all of those people.

Wren recollects about her dad, and wishes he was more like John. Wren remembers when she was little, her dad used to say she was his “lady.” One day in 1986, her dad left her in the car outside of the hotel Cortez – and then the Countess found her and saved her, and helped her stay young forever. John is confused, if her dad wasn’t the Commandment killer then who was? Wren tells him to break them out of the hospital and promises to lead him to the killer.

The vampires that escaped have finally gotten enough blood in them to start looking like humans – it’s Valentino and Natacha. They can’t believe how long they have been locked up, they are determined to find Mr. March and make him pay. Natacha is furious, she screams at Valentino that it is all his fault, if he had just left The Countess alone, then they wouldn’t be in this predicament. He promises his wife that he will make their life far more glorious than it has even been before. A few guests check in to the room across the hall – and Valentino and Natacha get ready for another feast.

Flashback to 1925 – The Countess is waiting at the train station for Valentino and his wife Natacha. They never show up – instead they are being beaten by Mr. Marchs men. A few hours later they wake up in a small bedroom, all of the windows and doors are sealed with cement – there is no way out.

The Countess heads to her monthly dinner with Mr. March, she tells him that she is going to get married again. He is jealous, he decides to inform her of what happened to her last lovers, Valentino and Natacha. The Countess is shocked, and furious, now she realizes that Valentino and Natacha are alive – and they are the monsters that killed the construction workers.

Tonight’s episode ends with John and Wren breaking out of the mental hospital. She tells John that they have to go home to the Cortez to find the killer. Then, she tells John that she “really likes him” – and proceeds to run in to oncoming traffic and kill herself.