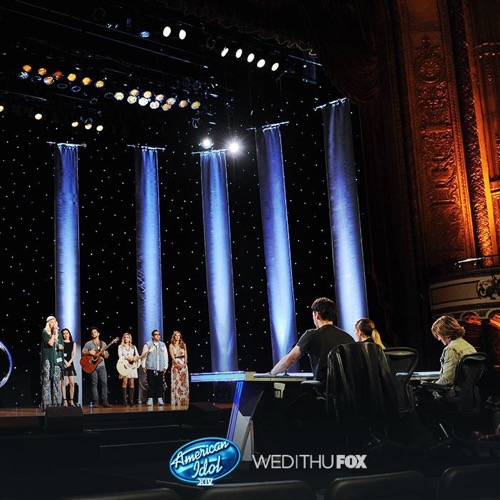 It’s another exciting night of American Idol on FOX tonight with an all new Thursday February 12, season 14 episode 13 called “Hollywood Week #4” and we have your weekly recap below. On tonight’s episode, Hollywood Week continues and the top 48 singers are revealed.

Tonight’s episode of “American Idol” kicks off with the final day of Hollywood Week. The 80 contestants make one last trip to the theater, where the American Idol judges Jennifer Lopez, Harry Connick Jr, and Keith Urban are waiting for them. The judges realize that they need to cut nearly half of the singers after today and they overwhelmed by the major decisions they face.

22 year old Lauren Lott takes the stage first and performs a rendition of “Let The Sky Fall,” for the American Idol judges. When she is done Jennifer Lopez gives her a standing ovation, she gushes that it was “really really beautiful,” and has star quality. Unfortunately Lauren will have to wait until some more of the contestants perform before she will learn her fate. Daniel Seavy, is just 15 years old and the youngest competitor remaining, he is nervous and knows he has a tough act to follow after Lauren’s performance. He gives it his best shot and performs Ed Sheeran’s “Fire.” Jennifer Lopez coos that Daniel is “so cute.” Keith Urban agrees that there is so much musical talent in Daniel’s tiny body.

Big Ron has been rehearsing his song all morning, and has been bumping heads with the producers and house band over how he should be singing it. He takes the stage in front of the American Idol judges and sings the same song that he nailed during auditions, “Let’s Get It On.” After he is done singing he begins ranting to the judges that Ricky Minor and the house band wouldn’t take any cues from him. Up next after Big Ron Wilson is 27 year old Adam Lasher, he takes the stage with his guitar and nails a rendition of “Free Fallin.” Unfortunately Keith Urban wasn’t a fan, and he thinks that Adam missed the octave.

Now, it’s time for the first round of cuts. Big Ron, Shi Scott, Lauren Lott, Daniel Seavy, and Adam Lasher all take the stage. The American Idol judges announce that Shi, Daniel, and Lauren are all going through to the next round. Big Ron and Adam Lasher have been eliminated and are going home.

The next singer to perform in the solo round of Hollywood Week is Quentin Alexander, after wowing the judges with his unique fashion sense – he busts out in song. Keith Urban and Jennifer Lopez both praise Quentin and there is no doubt that he is doing through to the next round. Country singer Maddie Walker wows the judges next – and they put her through to the next round, along with Trevor Douglas. Jennifer Lopez gushes that Trevor has “such an ease up there on stage.”

Louisiana native Alexis Grandville takes the stage next and feels a lot of pressure to redeem herself after she fainted on stage during the group performances. She tries to perform “Light Up My Life,” and she is off to a horrible start. Harry Connick Jr. interrupts her and tells her to confer with the house band and start on the right note. She tries to start again and Harry stops her and tells her that “two times is unexcusable and she is eliminated.” Alexis runs out of the theater crying. While Alexis is outside being consoled by her mother, Jax performs her solo round – and the American Idol judges are unanimous, she is going through to the next round.

21 year old Michael Simeon takes the stage next and performs his solo for the American Idol judges, Jennifer Lopez praises his performance and says that she can tell his music comes from his heart. Nick Fradiani performs next, he is determined to nail his solo because he is 28 years old and this is the last year that he can try out for American Idol because of the age limit. Kathryn Skinner is the next contestant to try and wow the judges, with her rendition of “How Do I Get You Alone.” Harry Connick Jr. says that she has “extraordinary vocal ability but she doesn’t have to go pedal to the metal.” It’s time for the next round of cuts, Michael Simeon, Nick Fradiani, and Kathryn Skinner are all brought back on stage. Michael and Nick are going through to the next round – but Kathryn is officially eliminated and is being sent home.

Mark Andrew has been up for days – and he can barely keep his eyes open. He prays that it won’t affect his solo performance as he takes the stage and decides at the last minute to ditch his guitar. The judges can tell that he forgot some of the lyrics – Jennifer Lopez asks him what happened, and he explains that he is “going on fumes.” Keith Urban sympathizes for the kids that are too tired – but Jennifer explains to him that once they get to the live show they are going to be even more tired than they are now with all of the press appearances. It’s time for the next round of cuts – the judges decide to give Mark Andrew another chance and put him through to the next round.

Joey Cooke is backstage preparing for her solo round – she is determined not to forget the words like she did during the group performance earlier this week. She performs “Across The Universe” by The Beatles for the American Idol judges. Joey heads out of the theater and has a mini meltdown and begins panicking while she is waiting for the judge’s decision. After a few more performances it is time for Joey to learn her fate. The next round of cuts take the stage, and Jennifer Lopez announces that Joey Cooke is going through to the next round.