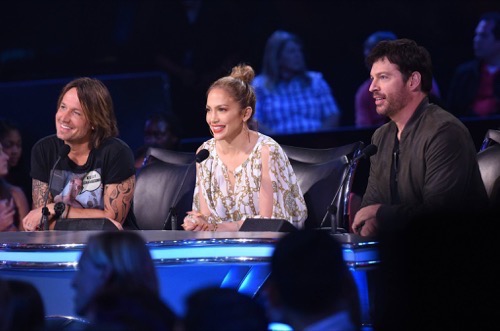 It’s another exciting night of American Idol on FOX with an all new Wednesday April 8, season 14 Episode 24 called “Top 8Perform” and we have your weekly recap below. On tonight’s episode, the top 8 vocalists perform.

On the last episode, the top 8 performed. Special guest star and former Idol Reuben Stutter from Season 2 joined Ryan Seacrest on stage and delivered the nationwide results from America’s votes and there was a special Fan Save. Did you watch the last episode? If you missed it, we have a full and detailed recap right here for you.

On tonight’s episode as per the FOX synopsis “the votes are in! The Top Eight will perform live and one finalist will go home.Florida Georgia Line will mentor and perform on the “Billboard Hits”-themed show. In addition, Jason Derulo will also be a mentor, and will perform his new single, “Want to Want Me,” and there will be a special performance of “Trouble,” with Iggy Azalea, featuring Jennifer Hudson.”

Tonight’s episode of American Idol kicks off with host Ryan Seacrest taking the stage, he introduces the judges: Jennifer Lopez, Harry Connick Jr, and Keith Urban. This week the Top 8 are performing Billboard Hits, and they have been mentored by Jason Derulo and members of the country band Florida Georgia Line. The guest mentors join Ryan on the stage and deliver America’s votes to determine who will be going home this week.

According to America’s votes the first singer to perform tonight is Jax, she is singing her version of Lady Gaga’s hit song “Poker Face.” After Jax’s performance Keith Urban kicks off the critiques with, “That’s an interesting arrangement of that song. What I love about you is your artistry, any one can take a song and do it like karaoke night. But to take it and make it your own is what you do week to week.” Jennifer comments, “I’m all for that too, but I think there is a line where it gets dangerous. You have the audience in the palm of your hands, the kids are loving you. This is yours to lose, you don’t want to go so far left that people can’t relate. I couldn’t relate to that at all. I think you need to be careful that you don’t go so far left that nobody gets it.” Harry agrees, “So Jax, you have magic in your voice. It’s magic. I don’t have a problem with taking the arrangement completely to the left. But, what you did on stage didn’t match it. It didn’t get to me because you just stood there. You have to change it up here and how you interpret it. You need to completely inhabit that emotional space. As good as the vocal was – I didn’t feel like you inhabited the song emotionally.”

The next member of the Top 8 to perform tonight is Nick Fradiani, Nick is singing “Teenage Dream” by Katy Perry. Jennifer critiques, “See that was so good. That’s taking a song and it’s interpreting it in the best way. You really made it your own, I could hear it on the radio today. Really happy for you!” Harry argues, “I don’t entirely agree, I personally like when you sing as sweet as you appear to be, I like you singing songs that have a little bit grittier lyrics. I thought it was fine, there were some pitch issues, but I think it was an all right song for you.” Keith Urban comments, “I think it was a killer song for you, it was the spirit of the song. It played to all of your strengths and It really sounded like you, I am glad that you made it your own.”

Quentin Alexander is the next American Idol contestant to sing for America’s votes tonight – he performs a rendition of Sam Smith’s hit song “Latch.” Harry kicks off the critiques and raves, “You look unbelievable, you always look great. You’re such a handsome guy, with the light and your square shoulders and your silhouette. You’re a really good ryhtmic singer so this is a good thing for you. This was a little bit lighter in a way and I dug it. There are still some pitch issues, but I think it was a good song for you.” Keith agrees, “Totally agree, and I have to give great props to Jason. The phrasing of this song was laid back in a cool way. It was really good for you. That was a great performance tonight.” Jennifer adds, “In the beginning the drums were so overpowering, I could tell you were thinking about the things that you want to do. At the end of the day, throw it away and do what you think is right. I still loved it and I loved that song. I agree it was a great choice for you.”

Joey Cook takes the American Idol stage next, she performs Miley Cyrus’s hit song “Wrecking Ball,” and she is determined to prove to the judges this week that her music is “ready for radio.” After her performance Keith Urban comments, “Joey, you look relieved! The thing I like about you is you always do something different with a song and this time you didn’t. I think when you got to the chorus you held back a little bit but the verses were really good. I liked it!” Jennifer agrees, “You know when I look at our roster of artists, it is really impressive because every one is so different and you are kind of the epitome of that. I like the verses, but during the chorus I was thinking about Miley. Again, the quality in your voice is so different that I think you stand apart.” Harry comments, “Even when you do an arrangement that is similar, it is still different. I think Jason gave you some great advice, I thought it was an okay vocal. But when it came to the second chorus – Jason was right, something needed to happen. As corny as it is, modulate or change something. You know what I mean? It was very constant and I got a little bored towards the end.”

Up next is Clark Beckham, he takes the American Idol stage and performs Ed Sheeran’s hit “Make It Rain.” Jennifer Lopez critiques, “I am going to talk fast – that was so amazing and so effortless. We need to have a serious conversation about the rest of the package. You have the feeling, the song, everything is happening. The image needs some work now. You have a finale in front of you, and you could be in it. It’s like Jason said, “pop your collar,” There are certain things you can do to make everything seem cooler. I am telling you, you could be at that finale.” Harry comments, “You have an amazing instrument, you are highly gifted in terms of your music ability. I was watching you play on the guitar, and it would be a thousand times better if you didn’t rush it. It’s good – but that is something you can work on.” Keith adds, “What happened at the end, it was like you were pro golfer and put it straight in the hole. At the end you killed it.”

Tyanna Jones is the next contestant to perform for America’s votes tonight, she sings a rendition of Rihanna’s hit song “Stay.” Harry comments, “One of my favorite things about what you just did is you held your emotions in check. It’s always more interesting to watch someone struggling not to cry. What I really dig about you is you have this small bravado – I thought it was a fantastic, emotional performance.” Keith agrees, “You have such a maturity in your voice. If none of us had ever heard it before and that was an original song – it would be a hit. It was beautiful.” Jennifer adds, “It’s like I said in the package, the last couple of weeks you lost your way and you had to dig deep. Everything just came together in the right way today. Congratulations.”

According to America’s votes, Qaasim Middleton and Rayvon Owen are in the bottom two. Both Qaasim and Rayvon will get a chance to perform on the Idol page – and then America will vote on Twitter to decide which singer will be eliminated and which will move on to the Top 7. Rayvon Owen performs first, he sings “Set Fire To The Rain” by Adele. Keith Urban critiques, “That was crazy, that was a man singing for his life right there. It was actually really good. You sang the heck out of it.” Jennifer comments, “I really have to applaud…the gravy. Harry will explain that in a minute. Was it the best song for you, I’m not sure. But I love the way you sing.” Harry adds, “I ran out of last time explaining the saying “all chops and no gravy.” How would you explain your gravy? Tell me in a few words, what is your gravy, what makes you tick?” Rayvon answers, “I just strive to inspire people and give all glory to God for the gift that he has given me. I just want emotion and honesty when I perform. I want people to be able to laugh, to dance, to cry.”

Now it is time for Qaasim Middleton to sing for America’s save, he takes the Idol stage and performs “Heyya” by Outkast. Jennifer raves, “Qaasim, it is no secret that I am a huge fan of yours. That’s a big song and a tough song, but again you always wow us with your performances.” Harry adds, “American Idol is lucky to have you because the show looks for people year after year that have your skill set. The vocal was not dissimilar to Andre, I thought it was strong. The performance was good.” Keith adds, “You are such a great performer, that was a great song for you to do. You know how to make the most of that, by putting it in a complete package. It’s about playing to your strengths and being entertaining. And you are so entertaining.”

Now, it is time for America to vote on Twitter whether they want to save Rayvon or Qaasim. After the votes are tallied Ryan Seacrest reveals the results – Rayvon Owen is saved. That means that Qaasim Middleton is officially eliminated from American Idol.