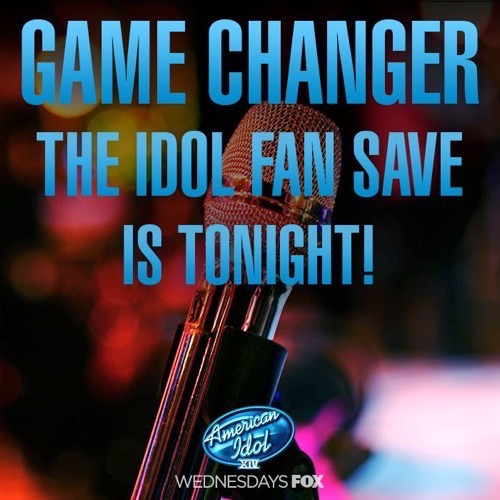 It’s another exciting night of American Idol on FOX with an all new Wednesday April 1, season 14 episode 23 called “Top 8 Perform” and we have your weekly recap below. On tonight’s episode, the top 8 vocalists perform.

On tonight’s episode as per the FOX synopsis “The votes are in! The Top Eight will perform live and one finalist will go home.” Also tonight a new twist is coming  fans can tweet to save an Idol finalist from elimination! Ryan will announce which Idols are in the Bottom Two along with their specific “save” Twitter hashtags.  You will have about five minutes in which you can tweet your choice using the hashtag for your favorite contestant.

Tonight’s show is going to be an exciting one, which I’m not going to miss and neither should you. Tune in tonight at 8 PM EST! Celeb Dirty Laundry is your go to place for all the up-to-date American Idol News and we’ll be recapping the episode right here for you. Do you have a favorite to win? Hit up the comments and let us know who you really like!

Tonight’s episode of American Idol kicks off with host Ryan Seacrest taking the stage, he introduces the Idol judges: Harry Connick Jr, Jennifer Lopez, and Keith Urban. Ryan explains that tonight they will be celebrating Kelly Clarkson, the very first American Idol, crowned back in 2002. Her debut album “Thankful” went double platinum – and this week she has been working with the Top 9 and mentoring them.

Special guest star and former Idol Reuben Stutter from Season 2 joins Ryan Seacrest on stage and delivers the nationwide results from America’s votes. Tonight will be a special Fan Save. The bottom two singers will have a chance to perform tonight, and then America will vote for which contestant they want to save and which one they want to send home.

But, before we get to the Fan Save, the Top 7 contestants according to America’s votes have to perform. Up first is Nick Fradiani, he is performing Kelly Clarkson’s hit “Catch My Breath.” After his rendition Keith Urban kicks off the critiques with, “I’m glad you did that song, I really think it was suited for your voice. I think the same thing as last week though, you gotta loosen up a little bit.” Jennifer adds, “There is a blossoming, week to week, and it is beginning to happen. Do they still have someone that works with you on movement? Find something that makes you not think about moving. One singer who I used to be married to shakes his leg, and it’s just a little thing, I feel like that is what you need. It was a really good performance though.” Harry agrees, “I’m glad you sang that song, it seems like you have finally caught your breath. It wasn’t my favorite vocal but it seemed like you were here and comfortable and that part I liked.”

Jax is the next contestant to take the stage, she performs Kelly Clarkson’s song “Beautiful Disaster.” Jennifer Lopez comments, “That was really pretty, I actually heard a tone in your voice where you do that thing that I love. It was really beautiful, I enjoyed it. For the most part you sang it so beautifully.” Harry comments, “I have only heard Kelly’s version of that and I have never met her. But I know she would say Harry you are right when I say that was very fantastic.” Keith adds, “I saw a lot of inconsistencies, but I think a lot of it is the performance. You have all of these things to contend with and you have limited time to do it and so much could go wrong. But, within that I see really great artistry. Really good.”

The next American Idol singer to take the stage tonight is Tyanna Jones, she’ll be performing Kelly Clarkson’s hit “Mr. Know-It-All.” After Tyanna’s performance Harry Connick Jr. critiques, “That song is a mysterious song, there is a mystery about you and I always wanted to know a little bit more about you. It’s a great gift to be able to transcend what you are singing and make people feel like you are singing to them. There may have been some pitch issues, but when you are singing from the heart it doesn’t matter as much.” Keith comments, “You sing great, we are well past that. I didn’t feel like you connected with what the song was about. There is a really dark center to that song, I missed that a little bit in the song.” Jennifer adds, “You did remind us though that you have amazing pipes. So no worries!”

Joey Clark is the next Top 8 singer to perform, she has decided to sing Kelly Clarkson’s hit “Miss Independent.” After her performance Keith Urban comments, “All I can say is the great thing about what you do with songs is you completely build a new song. You have so much artistic weight and you do it effortlessly.” Jennifer comments, “I agree, that was one of the best performances of the night. You bring it every single time. You’re in your own lane. You do your own thing.” Harry comments, “You get an A plus from me for bravery. The only thing I wish is you didn’t treat the jazz elements of the song as a novelty, it’s okay to sing jazz without going back fifty years and setting it up like a film noire movie.” After Joey’s performance Kelly Clarkson sings her new hit “Heartbreak Song,” for the audience and American Idol judges.

Joey, Tyanna, Jax, and Nick are all safe tonight – the next performer to join the Top 8 according to America’s votes in Quentin Alexander. He has decided to sing Kelly Clarkson’s hit song “Dark Side” for the American Idol judges. Jennifer Lopez kicks off the critiques with, “I think they liked it. I liked it! I thought it was perfect for you. You have this great talent of choosing the right songs for yourself. You killed it with that song again, like you do every week.” Keith agrees, “You have such a great poise when you perform. You mentioned in the beginning that there is a real beauty in the quiet, but real beauty is with the truth and that’s how you perform.” Harry adds, “I think you need to spend as much time on the creative as you do on the skill stuff. How great do you wanna be? If you want to be great then there are some notes you can work on, you need to learn more about harmony and chords. You will fall by the wayside if you don’t know the notes.”

Clark Beckham is the next performer to take the American Idol stage, he performs Kelly Clarkson’s song “The Trouble With Love Is.” After Clark’s performance he gets a standing ovation from Jennifer Lopez. Keith Urban gushes, “Really really good, just please make sure you lead with the feeling. There is a difference between I have to do this, and my voice just happens to be able to do this.” Jennifer agrees, “I have gooseys from head to toe with your ovie star good looks. It was just…I mean.” Harry adds, “Keith just gave you some good advice. You took a Kelly Clarkson song and you directly followed it with a Kelly Clarkson song – and you nailed it.”

Daniel and Rayvon Owen are officially in the bottom two tonight. They will both get a chance to perform and then America will decide which singer to save by voting on Twitter. Daniel sings Kelly’s hit “Break Away.” Jennifer gushes, “That’s a super hard song baby, I think you did an okay job and you did as good as you could with it.” Harry adds, “Just keep practicing man, practice, practice, practice. You have a lot going for you.” Keith agrees, “You look great on camera.”

It’s Rayvon Owen’s turn to sing to America and try to get them to save him on Twitter. Rayvon performs “Since You Been Gone.” Harry kicks off the critiques, “Where I come from there is an expression ‘all chops and no gravy.’ You have an incredible voice, but I want to hear your gravy. It’s a beautiful voice, undeniable.” Keith disagrees, “I know what Harry is saying, but as far as you that was one of the best performances of the night.” Jennifer closes with, “This is not an easy competition, you just got to differentiate yourself. Keep digging. Keep pushing.”

Now it is time for America to decide who to save – Rayvon or Daniel. After the live twitter votes are tallied, Ryan Seacrest announces that America has chose to save Rayvon Owen. Daniel Seavey is officially eliminated from American Idol.