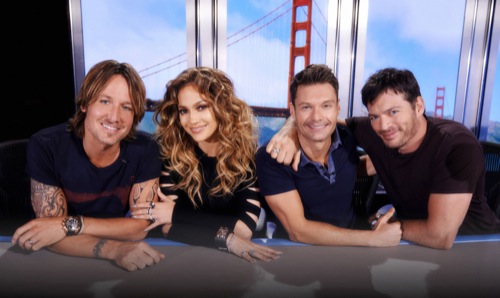 Tonight it is the return of American Idol on FOX with an all new Wednesday January 7 season 14 premiere called “Auditions #1” and we have your weekly recap below. On tonight’s episode, part 1 of a two-part season 14 opener which features auditions in Nashville.

On the last season 13 finale, the most anticipated night of the television season was finally here! On the second part of the two-night season finale, the top finalists reunited on the stage one last time before host Ryan Seacrest revealed the newest AMERICAN IDOL in the all-new “Winner Chosen” episode. The episode featured performers including; Lady Antebellum, Aloe Blacc, KISS, John Legend, Demi Lovato, Jason Mraz, Jennifer Nettles, Paramore, Phillip Phillips and Darius Rucker. Did you miss the last season finale? If you did we have a full and detail recap here for you.

On tonight’s episode as per the FOX synopsis, “everyone’s favorite singing competition returns for its highly anticipated 14th season. The fun begins when host Ryan Seacrest and returning judges Jennifer Lopez, Keith Urban and Harry Connick, Jr., travel to Nashville, TN, to discover the city’s best talent. This season promises to deliver the most talented group of singers yet and, as always, it’s up to the viewers to root and vote for their favorite contestants.”

Tonight’s show is going to be an exciting one, which I’m not going to miss and neither should you. Tune in tonight at 8 PM EST! Celeb Dirty Laundry is your go to place for all the up-to-date American Idol News and we’ll be recapping the finale right here for you. Hit up the comments a us know how excited you are for this new season.

Tonight’s season premiere of American Idol kicks off with host Ryan Seacrest. He reveals that for the first time in American Idol history – they are going to introduce the final 24 singers before auditions…kind of. He shares an American Idol music video of the final 24 of the season – however we can’t see their faces, it is just their silhouettes.

After the music video – the judges head to Keith Urban’s stomping grounds Nashville, for their first round of auditions. The judges, Harry Connick Jr., Keith Urban, and Jennifer Lopez take their seats in the judge chairs and a man named Reilly comes in with his guitar. Keith recognizes him instantly and realizes that they actually played on stage together at a country music show in 2012. Aaron announces that he is going to sing “Georgia Wood,” one of Keith’s songs. After his rendition, the judges rave over how “easy” it is for him to perform. Harry says that he is meant to be on stage. Their decision is unanimous – Reilly is going to Hollywood.

Up next is 19 year old Priscilla, a Mississippi native. She announces that she will be singing “Delta Dawn” by Tanya Tucker. After her performance, Harry Connick says that he definitely wants to see her again. But, Jennifer Lopez is not impressed and doesn’t think Priscilla has what it takes. Keith Urban is the tie breaker – he agrees that Priscilla needs to grow more as an artist, but he thinks she can do that in Hollywood. So…Priscilla is going to Hollywood.

After a slew of cringe-worthy auditions, Amber Walker, a 15 year old from Memphis, Tennessee, heads in to the audition room – she announces that she will be singing an Elvis song. Afterwards the judges are blown away by her, Jennifer Lopez says that she “could just die” and votes to send her to Hollywood. Unfortunately Harry Connick Jr. says that Amber needs more work and he is voting “no.” Keith Urban is the tie breaker, and he hands Amber her Golden Ticket and says that she is going to Hollywood.

25 year old Kyle Corman, a grocery store employee, wows Jennifer, Harry, and Keith with his rendition of Goo Goo Dolls’ “Give A Little Bit.” Jennifer says that Kyle has his own style, and it doesn’t sound like he is singing – it just sounds like he is talking and growling. Kyle starts singing again, and Keith snaps at him that if he doesn’t want to hear their feedback then he can just leave. Kyle leaves the audition disappointed, he will not be going to Hollywood.

The next singer to audition works across the street at the coffee shop, Kory Wheeler announces that he will be singing “Can’t Make You Love Me.” When he is done singing Jennifer squeals, “I got gooseys!” Keith is happy that he made the song his own and sang it his own way. Harry agrees, “I love the sound of your voice.” It’s unanimous, they give Kory his golden ticket, and he is going to Hollywood.

Michael Simeon heads in to the audition room, he tells the judges that he is there because he is tired of working on the family farm, and then he sings a rendition of “If I Stay.” The judges are blown away by his performance and hand him his ticket to Hollywood. Afterwards, Michael asks Jennifer to dance with him – so Keith and Harry play the song for him while they slow dance and he serenades her.

Tonight’s series premiere ends with 15 year old Emily Brooke’s audition, a rendition of “Blown Away” by Carrie Underwood. Afterwards Jennifer gushes that “she is really great and she executed it beautifully.” Keith Urban agrees that he loved it and he thinks she has a lot of raw talent. Harry agrees and says that he thinks Emily is “cool and has potential.” The votes are unanimous, Emily is headed to Hollywood for the next round of tryouts.