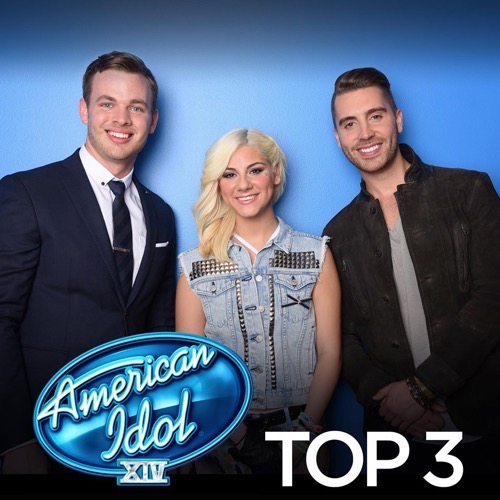 It’s another exciting night of American Idol on FOX with an all new Tuesday May 12, season 14 episode 29 called “Top 2 Perform” and we have your weekly recap below. On tonight’s episode, the top 3 singers perform; one contestant is eliminated.

On the last episode, the votes were in! Finalists made it to the Top Three and one singer had to say goodbye. Did you watch the last episode? If you missed it, we have a full and detailed recap right here for you.

On tonight’s episode as per the FOX synopsis “After weeks of singing their hearts out, only three remain. One finalist will be sent home and two will be left to compete for the IDOL crown!”

Tonight’s episode of American Idol kicks off with host Ryan Seacrest taking the stage with the final three contestants: Jax, Clark Beckham, and Nick Fradiani. Ryan announces that based on last week’s vote the person that is officially eliminated from American Idol is Jax – that means Clark and Nick are in the final two, and will be singing tonight for America’s votes.

Clark Beckham takes the American Idol stage first tonight and performs Ray Charles’s hit song, “Georgia On My Mind.” Keith Urban kicks off the judges critiques with, “Clark, that was so good! Like a whole mess of flapjacks drenched in syrup, it was Southern and soulful. It was really good man.” Jennifer adds, “I see how far you have come, you were like this diamond in the ruff. But, right now while you were singing that again, you were reminding us why you were here.” Harry Connick Jr agrees, “One of the things I admire about you is this undercurrent of drive. You are always pushing and pushing and pushing, and that was a great way to start the show.”

Nick Fradiani heads up on the idol stage next and sings “Bright Lights” by Matchbox 20. Jennifer Lopez shouts over the crowd, “They like you Nick! They like you! When Simon Fuller was thinking up this competition years ago, he was probably thinking of someone like you – someone who could be true American Idol and has the voice, the looks, the presence, you know everything it takes. We have seen you grow in to that over the last few weeks.” Harry adds, “We are running out of time so I will say this really quickly – this is a perfect opportunity for people to vote because this competition is crazy. It’s really hard for the country to pick between these two, you have to vote.” Keith Urban chimes in, “I can relate to you Nick – it was really good.”

For Round #2 Clark Beckham heads back on the Idol stage and plays an acoustic version of “Ain’t No Sunshine When She’s Gone.” Harry Connick Jr. begins the critiques with, “Nice job! My favorite part about that was you sang a slow song in Georgia and you came back and followed that with another slow song – and that takes a lot of guts to do that. It’s almost like a boxer and a puncher, that was an inward soulful performance and Nick is more of an outward performer. It’s apples and oranges.” Keith jokes, “Do you know how to turn a duck in to a soul singer? You put him in an oven and turn it up until its bill withers.” Jennifer adds, “I think we all want to know, who is she? Who were you singing to just now? You don’t have to answer that – but it was amazing.”

Now it is time for Nick Fradiani’s second song of the night, he performs Jason Mraz’s song “I Won’t Give Up.” Keith Urban raves, “Such a good song choice. Is this the first time you have played piano? I had no idea you could play? You are hot and so good Nick, beautiful.” Jennifer adds, “So good. I got stuff for not choosing between the two of you, but it’s hard. I feel like you guys are really going toe to toe. I loved the way you sounded on that, it was the perfect song.” Harry closes with, “I’ve come to know you musically as a performer over the last few months – and I think your strongest thing is where you lay it all out there emotionally. It was a heartfelt performance.”

For his final performance tonight, Clark Beckham performs an original song called “Champion.” Jennifer begins the critiques with, “Hi baby! How does it feel to sing your first song? It feels great, I remember that feeling. It feels great to see you guys come in to your own and sing your first song. It’s going to be a tough night.” Harry adds, “Right now it is where it gets interesting, I think you did a good job – but it is obvious that it is a new song and you are still getting used to it.” Keith adds, “What’s great is how inspiring that song is – there are so many people at home who are like I am going to audition now, because that was inspiring.”

Nick Fradiani performs his final song of the night, an original song title “Beautiful Life.” Harry comments, “I’ll tell you what – I really enjoyed it. I thought it was a strong performance, but you got really lucky, that song sounds like it was tailor written for you.” Jennifer agrees, “It felt amazing, my favorite part was when everyone was dancing and you were like “wow,” and then you kept singing. It felt great, I loved it.” Keith closes with, “When all of this is over, you have to make a record. These people are either going to listen to this music or they aren’t going to – and that song is the kind that people will buy. Bulls eye man.”