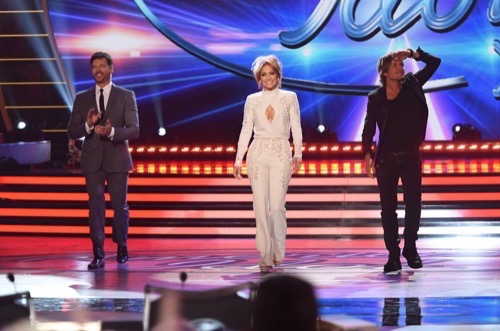 It’s another exciting night of AMERICAN IDOL on FOX with an all new Wednesday May 13, season 14 finale called “Winner Announced” and we have your weekly recap below. On tonight’s episode, the winning singer is crowned in the conclusion of the two-part season 14 finale.

On the last episode, after weeks of singing their hearts out, only three remain. One finalist was sent home and two were left to compete for the IDOL crown! you watch the last episode? If you missed it, we have a full and detailed recap right here for you.

On tonight’s episode as per the FOX synopsis, “the moment America has been waiting for has finally arrived! The votes are in and it all comes down to tonight’s Season Finale, when the next AMERICAN IDOL is finally crowned! Slated to appear: Steven Tyler; Vance Joy; Nile Rodgers; Janelle Monae; Echosmith; Pitbull; Jamie Foxx; the Jacksons; Fall Out Boy; New Kids on the Block; Ricky Martin.”

Tonight Latin superstar Prince Royce makes history on the Idol stage with his crossover of “Back It Up” featuring Pit Bull and American Idol judge Jennifer Lopez. Joey Cook was one of the most unique contestants to grave the Idol stage, she heads back up on the Idol stage during the live finale to perform along side Echosmith, they sing a rendition of the popular song “Cool Kids.” After Joey’s performance host Ryan Seacrest takes a break from the performances to interview the judges. Harry Connick Jr. says that he has no idea who will win tonight – the competition is too close between Clark Beckham and Nick Fradiani. Jennifer Lopez disagrees – she thinks that Clark will be the Season 14 winner, Keith Urban seems to think that America will choose Nick Fradiani as the 2015 winner.

Idol judge Keith Urban heads up on the stage next to perform his hit song “Even The Stars Fall 4 U.” Keith’s wife Nicole Kidman cheers him along from the crowded audience while he performs live. Actor/musician Jamie Foxx is up next – Rayvon Owen accompanies him and they sing a rendition of Jamie’s popular song “In Love By Now.” After Rayvon’s performance it is time for Nick and Clark to honor their “music mentors.” Clark chooses Pastor Jim as his mentor, and Nick has selected his band’s guitarist Nick Abraham. Nick Fradiani and Clark Beckham present their mentors with keys to brand new 2015 Ford Focuses, as a thank-you gift for inspiring them.

New Kids On The Block hit the American Idol stage next – and 15 year old Daniel Seavey joins them to perform a medley of some of the boy band’s greatest hits, like “Step By Step.” Quentin Alexander is up next, he joins Vance Joy on stage to perform the hit song “Rip Tide,” which coincidentally Quentin also sand during auditions. Former contestant Qaasim Middleton gets to perform next along side Pit Bull and Chris Brown – they sing a rendition of their new hit song “Fun.”

Former American Idol judge Steven Tyler is the next superstar to head up on the stage tonight during the Season 14 finale, he has some assistance from Top 3 singer Jax – they perform a medley of some of Steven Tyler’s most popular songs.

Now, it is time for the Top 2 finalists to perform before we learn who the Season 14 winner will be. Clark Beckham heads up on stage with Grammy Award winner Michael McDonald – they perform the hit song “Takin It To The Streets.” Nick Fradiani is up next, he gets to perform on the Idol stage with Andy Grammar, they wow their audience with their rendition of “Back Home,” and a medley of some of Andy’s other popular songs.

Before we learn who the winner of Season 14 is, the American Idol judges have a special treat for us. Jennifer Lopez, Keith Urban, and Harry Connick Jr. all head up on stage to perform a rendition of “Diamonds” together, followed by a medley of other hit songs.

It’s finally time for the results, based on America’s votes – the winner of Season 14 of American Idol is…Nick Fradiani!