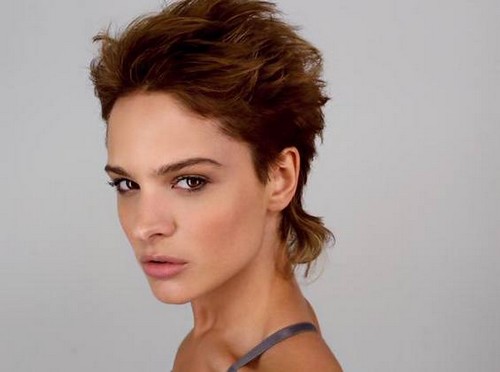 America’s Next Top Model cycle 22 saw another major elimination during “The Girl Who Gets Possessed.” We have an ANTM exclusive interview, and eliminated model Ava Capra tells all. CDL also has a full recap of season 22 episode 3 of ANTM right here.

The models exercised some creativity with two challenges that pushed their editorial skills with two shoots. Kelly Cultrone ran the first challenge with a Simply Be campaign that asked teams of models to create an alluring campaign with a tagline involving the gorgeous and curvy, Whitney Thompson. For the elimination challenge, the models are harnessed and lifted into the air for a high-fashion spread that encompasses being possessed. Of course, the episode is packed with drama including an intervention between Mame and Hadassah. Sadly, Ava Capra is sent packing after her images didn’t please the panel.

Ava Capra talks about her experience on America’s Next Top Model, revealing her true thoughts on the model mullet, the best advice for surviving ANTM, and what she is up to now.

Personalities are clashing in several different ways. Mame and Hadassah had a huge fight that forced an intervention. You confronted Mikey for saying some rude things about your winning image that won you time in the Tyra Suite, after a crying Courtney confessed what she had overheard. What do you think is behind the rivalries and feuds? Jealousy, arrogance, or just the competition and being confined within a group?

“You know, it’s a competition and there were a lot of clashing personalities. Everyone wants the same prize, so bound to happen. Courtney was crying on my shoulder and I did what I could to comfort her. People loved that I stood up for her, but it’s who I am. I grew up in a home with an abusive father and even was subjected to bullying in school. I refuse to be a bystander when that kind of thing is taking place. It did jar my focus, but it was my choice and I stand by it.”

The modeling industry seems to be pretty cutthroat without the reality show aspect thrown in. How you do you combat the emotions and body image issues?

What is the biggest challenge that ‘America’s Next Top Model’ presents to hopeful super models?

“Personally, the makeover was the biggest challenge for me on a personal level. I got the model mullet and it’s not my style, but I tried to be professional and took it with a smile. My hair began to weigh me down, but it’s a cute pixie cut now. As always, I wanted to be incredibly respectful at all times.”

So, during your final panel, when Tyra said your outfit made you look like a housewife…

What is your plan for life after ANTM?

It hasn’t slowed down! I am walking in New York Fashion Week, I just released a new song on my Youtube channel, and I’m actually pitching reality shows. I fell in love with the industry!”

If you could go back to the start of ‘America’s Next Top Model’ and give yourself tip, what would it be?

“Focus on yourself! I would ignore the cattiness and focus on myself and why I was there.”