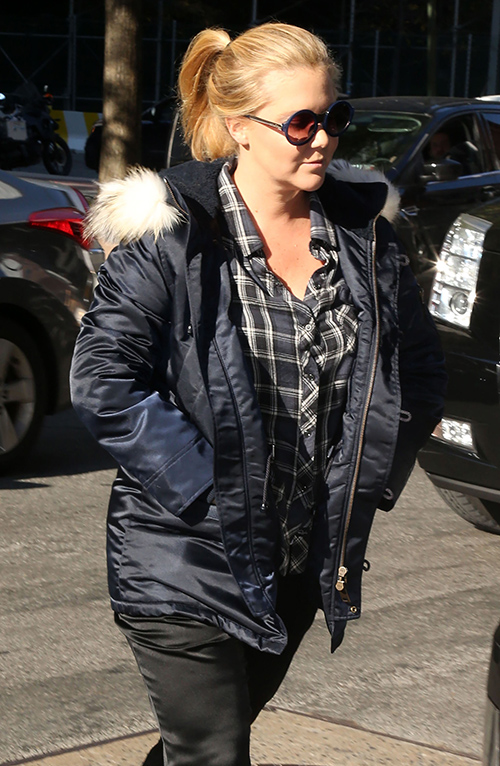 Amy Schumer has always raised eyebrows – but now it’s not just her wild behavior and colorful language, it’s her growing waistline that is making people do a double-take. Amy Schumer has never been “Hollywood Skinny,” the funny actress has always been healthy. But, recently, Amy Schumer has been packing on the pounds.

Amy Schumer has always embraced her curves, and she recently participated in a nude photo shoot – just to demonstrate how happy she is with her body. But, Schumer didn’t receive the feedback she expected. According to this week’s edition of Star Magazine, it looks like Amy Schumer has packed on 30 pounds over the last few months, and is weighing in at around 170 pounds.

An inside source close to Schumer dished to Star Magazine, “She has gained a lot of weight over the past few months. Now that she is successful and swept up in the highlife, she drinks a ton of alcohol and eats terribly.” The source added that Amy is “in denial” – and she doesn’t realize how much weight she has really gained. Apparently, Amy has gained so much weight that she is barely recognizable and she recently had a total diva meltdown at a gym because the staff did not recognize her and accused her of trying to enter without a membership.

Part of Amy Schumer’s entire image is based on not caring about her image. But, she might want to start caring – not just for her career, but for her health. Hollywood is a cruel world – and if Amy Schumer thinks that she can get by with a 30 pound weight gain and it won’t affect her career, she is crazy. We’re not saying that we want Amy to be stick skinny – but gaining weight at this rapid of a pace can’t be healthy for anyone.

What do you guys think about Amy Schumer’s weight gain? Should she start taking better care of herself? Or should Hollywood just accept her as she is – regardless of how unhealthy that is? Share your thoughts and comments below!