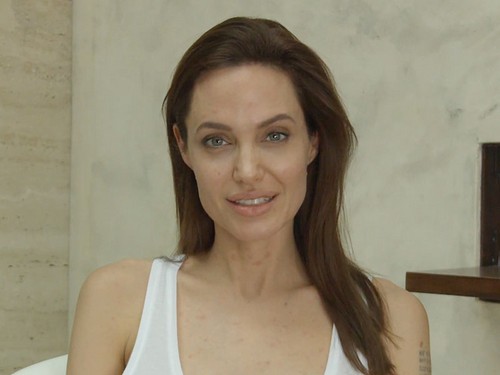 Angelina Jolie and husband Brad Pitt are going to be parents again, very soon – if Angelina has her way. The actress is not pregnant and expecting another baby with Brad Pitt though, she is in the process of adopting a 2 year old Syrian refugee named Moussa. Although Bad and Angelina are already struggling to balance their busy careers and movie schedules along with caring for their six children (three of which are adopted), Brad is reportedly on board with Angelina’s decision to adopt Moussa and bring him home as a new addition to their already large family.

According to the March 2nd edition of OK! Magazine, Angelina recently met Moussa on a trip to Turkey with the Special Envoy for the United Nations Council on Refugees. An insider dished to OK! Magazine, “She just fell in love with him. It was that immediate. Brad said he trusted her judgment and if he thought Moussa would be the right addition to their family, then she should go for it. He was excited. When Angelina heard Moussa’s story, she became visibly upset. She loves her children so much, and is particularly horrified when she sees the effect war has on kids.”

Angelina Jolie is in for a serious legal battle if she plans to take little Moussa home with her though, according to OK! it is especially hard for Americans to adopt Syrian children. But, the magazine’s inside sources reveal that Angelina is determined to adopt Moussa and she is already trying to pull some strings and use her “special connections” in Turkey to make the adoption happen.

Are you surprised that Angelina Jolie is looking to adopt another child from a foreign country? Do you think that Brad Pitt is really on board, or could it cause some serious problems for their already stressed marriage? Let us know what you think in the comments below!