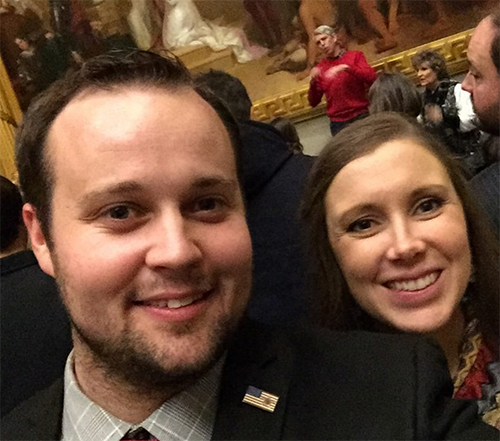 Anna Duggar has made a decision and she won’t be getting divorced. Josh Duggar is getting treatment for his sex addictions in rehab and Anna says she will forgive her husband and move on from the horrific sex and cheating scandals that rocked their marriage.

Even though Josh repeatedly lied to Anna and everyone else about the extent of his alleged addiction issues, she has decided to give their marriage another go. News that Anna doesn’t want to leave Josh after the heartbreak he put her through comes as a shock to many.

Especially Anna’s brother Daniel Keller, who has made no secret of his hatred for Josh Duggar.

Anna Duggar hasn’t been silent throughout Josh’s scandal. “My heart’s desire is for our marriage to be restored,” Anna confessed during a 3-part special about the Duggar daughters. It’s really shocking that Anna is able to forgive Josh after all he has done.

The shamed 19 Kids and Counting son was initially outed for molesting five underage girls when he was just a kid himself. The scandal got much bigger when details of a Duggar coverup started to unravel. Many are angry at the Duggar family for doing so much to protect their son while forcing their daughters to live with an accused sex offender.

Things got much worse for Josh when the Ashley Madison website was hacked and reams of user data was made public. It turns out that Duggar had an account with the cheating website which was active enough for Josh to get an “affair guarantee.”

That’s where a user pays extra, and in Josh Duggar’s case it was $250 extra, to guarantee they find someone to cheat with on the scandalous website within three months. If Duggar had been unable to secure a sex partner in the time frame, he would get his money back.

Danica Dillon came forward and filed a lawsuit against Duggar for the alleged emotional and physical injuries she suffered after two sexual encounters with Josh. Danica claims that she was hired by Josh and you can probably guess for what.

Dillon claims that Duggar was so rough during their encounters, that he caused her to suffer PTSD

Why would Anna Duggar want to stay with the man who humiliated her and broke their wedding vows in such a public way? OK! magazine’s source says, “She is terrified of being alone. And she’s actually blaming herself for his actions.”

Considering the extreme nature of Josh’s infidelity, maybe Anna should stop beating herself up. There is no way the ultra conservative Duggar wife could have known what her husband was into.