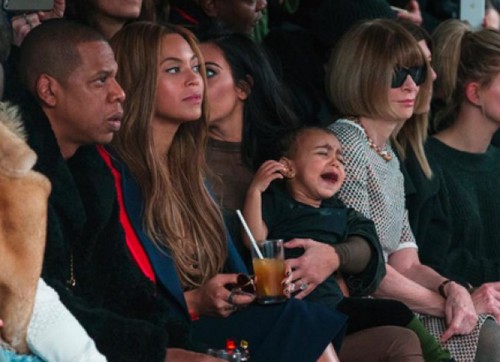 Has Anna Wintour insulted Kim Kardashian over North West’s temper tantrum at Kanye West’s Adidas fashion show? Anna Wintour is clearly not a fan of screaming children, which she has made abundantly clear every time she is forced to sit next to North West during a fashion show. Since Anna has forced herself to put up with Kim Kardashian and North West for the sake of maintaining her relationship with Kanye West, she has been spotted in several fashion show front rows sitting next to Kim and North, trying her best not to curdle her face but failing miserably. Seriously, go look at any picture of Anna Wintour from a fashion show, and you’ll see how her face changes when she has to sit next to Kim and North.

Plus, North West might have gotten herself – and other children – banned indefinitely from fashion shows completely after throwing her temper tantrum last week at Kanye West’s Adidas show during New York Fashion Week. Anna was reportedly furious with Kim for bringing her child with her, with Radar Online’s source explaining, “Anna doesn’t think fashion shows are appropriate for very young children such as North West. The loud music, the lights from the show, along with flashes from all of the cameras, and of course, all of the people is just overwhelming to a toddler. Anna never would have brought her now-adult children to fashion shows when they were young.”

Now, while Anna doesn’t like small children – especially at fashion shows – she does have exceptions to that rule. According to reports, Anna Wintour absolutely adores Harper Beckham, the now-toddler child of David Beckham and Victoria Beckham. In fact, one of the extremely rare instances of Anna cracking a smile at a fashion show has come from posing with Harper, who’s usually impeccably behaved at fashion shows. Radar’s source adds, “Harper is just a delightful little girl, and has such great manners. Her mummy and daddy are always reminding Harper to say please and thank you. After Anna complimented little Harper on her outfit at the fashion show, she sweetly said in her little voice ‘Thank you so much’. Anna is absolutely besotted with Harper, and always sends the little girl birthday presents.”

Well, we also know that Anna Wintour doesn’t love the Kardashian – West family, so obviously her love doesn’t extent to their children. And even though Anna Wintour is still making Victoria Beckham wait for her Vogue cover, she clearly [and visibly] adores Harper Beckham. Playing favorites with toddlers – just the sort of thing Anna Wintour would revel in.