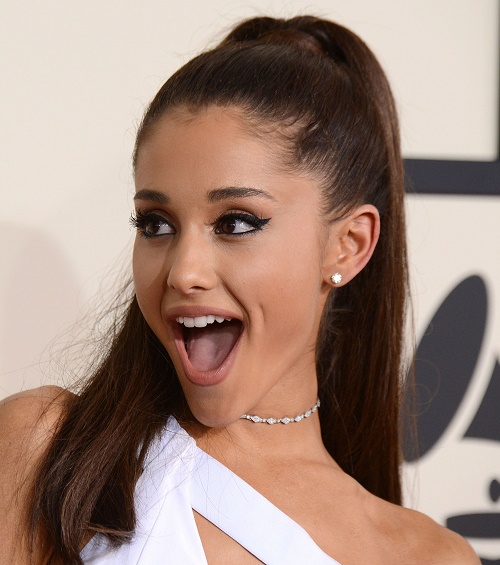 Is Ariana Grande going for the big pop superstar Justin Bieber – is that why the diva dumped Big Sean?It seems that rapper Big Sean and pop superstar Ariana Grande have called it quits after several months of dating – and Justin Bieber might be responsible! The two confirmed with US Weekly that they had ended their relationship. Their reps released the following statement on Monday, April 20: “They both care deeply for each other and remain close friends. We kindly ask that the media respect their wish for privacy regrading this personal matter at this time.”

An inside source close to the couple reveals to US that the ended the relationship weeks ago. They tell the magazine, “They made the decision to part ways because their conflicting touring schedules would keep them apart over the next year.”

On April 4, Big Sean took to Twitter to share a cryptic message, which is clearly about the break up. He writes, “Just know I love u and I care for ya.” Grande, in response wrote, “Love u babes the most. You just can’t imagine.”

We find it hard to believe that they broke up amicably due to their touring schedules. We reported earlier this month that Justin Bieber had been seen getting a little to close for comfort with Ariana Grande on stage, at her concert on April 8, and Big Sean was not happy about it. After the incident, Big Sean took his frustration out on Twitter saying, “So many times in my life I wish I could of been at 2 places at once.” The rapper deleted the tweet shortly after posting it. He also tweeted a simple “Wow,” which he also deleted.

Bieber did not respond to tweets, and only wrote, “Love the stage. Thanks for having me @ArianaGrande and thanks LA. Gotta tour again soon :).” This is a love triangle gone bad if you ask us. It sounds like the Biebs played a crucial part in ending this relationship, just as we predicted at the start of the month.

It will be interesting to see what happens going forward. We want to hear from you. Do you think Ariana Grande and Justin Bieber will start dating to get closer now? Do you agree with us and feel that Bieber was the outside force that caused Big Sean and Ariana Grande to break up? Let us know in the comments below!