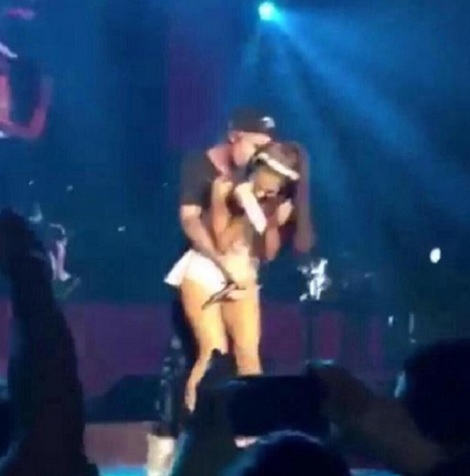 Rapper Big Sean is not too happy with Justin Bieber after he got a little to close to Ariana Grande, his current girlfriend. The whole scenario went down last night on April 8 in Los Angeles, CA.

Ariana Grande was performing at her concert at The Forum in Inglewood, CA. Justin Bieber made a surprise visit during Ariana’s set, and the two performed a couple of songs together. Fans loved the duos versions of “Where Are U Now,” “Love Me Harder,” and “As Long As You Love Me.”

Unfortunately, Grande’s boy friend, Big Sean, did not love them. Big Sean was reportedly in Canada at the time, but when photos surfaced of the Biebs getting a little to comfortable with Grande on stage, Big Sean took to Twitter to let out his frustration.

Apparently, left speechless Big Sean, simply wrote “Wow.” After fans were quick to accuse Big Sean of talking about the situation with Justin Bieber and Ariana Grande, Big Sean took the tweet down, minutes after posting it.

Still fuming, Big Sean took to Twitter once again. This time he wrote, “So many times in my life I wish I could of been at 2 places at once.” Big Sean also deleted this tweet a few minutes after posting it.

There is no word on whether or not Ariana Grande and Big Sean are having a rocky relationship, but many believe that the Bieber/Grande action was nothing more than a friendly action to amplify their performance and chemistry on stage.

Bieber’s response? “Love the stage. Thanks for having me @ArianaGrande and thanks LA. Gotta tour again soon :)” Apparently Justin Bieber did not see Big Sean’s tweets, or wanted to make light of the situation.

This isn’t the first time Justin Bieber performed with Ariana Grande. The two took the stage last week to perform “Love Me Harder,” in Miami.

What do you think? Is this the start of the end for Ariana Grande and Big Sean, or should everyone just relax and let these three figure everything out on their own?