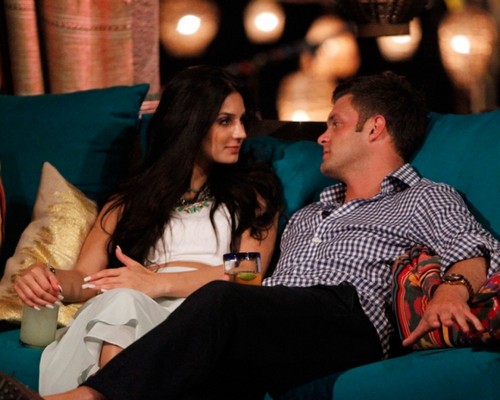 Bachelor In Paradise 2015 spoilers tease that Joe Bailey isn’t done being a total douche on the ABC reality TV dating show. But, plot twist: are he and Samantha Steffen getting married now? Kaitlyn Bristowe’s ex shocked viewers when he made it clear he was using Juelia just to stay on the show until Samantha arrived. Like clockwork, Samantha Steffen arrived in paradise this week – and Joe promptly dumped Juelia and went to make out in the hot tub with Samantha (Chris Soules’s ex).

Joe Bailey is easily one of the most hated men in Bachelor Nation right now, but Samantha Steffen doesn’t seem to mind. As a matter of fact, she tweeted a bizarre message to fans that has everyone wondering if she and Joe Bailey are getting married. Samantha tweeted, “I saw Joe w Kait, He text me I took the bait. His goal to make me a mate. I saw #BIP episode 2 too late. Wedding cake? Or Mistake? #bachelor.” Either she was having a tough time finding a word that rhymed with “mistake” or she and Joe Bailey are engaged? Why else would she mention a “wedding cake?”

Obviously Bachelor In Paradise fans are baffled, if she saw Episode 2 then why would she even still be talking to Joe Bailey – let alone thinking about their wedding cake. Then again, we think Joe Bailey is a total jerk – but in a twisted way his behavior is a little romantic. He completely pissed off the entire country, and dissed the sweetest girl ever, just so that he could have a shot with Samantha Steffen. We could see how that would be flattering for Samantha, in a dark, twisted sort of way.

What do you guys think? Are Samantha and Joe Bailey getting married? Or was she just trying to stir up some drama and riding her 15 minutes of fame until the wheels fell off? Let us know what you think in the comments below!