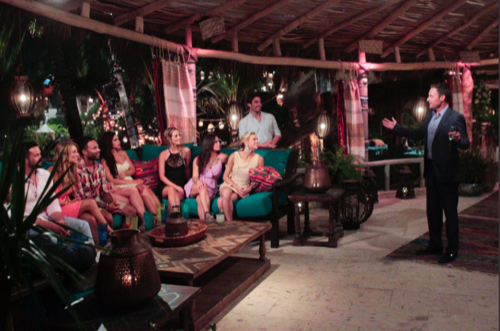 Bachelor In Paradise airs tonight on ABC with an all new Sunday August 16 season 2 episode 5. We’ve got your recap down below! On tonight’s episode season a new bachelorette arrives with a date card and asks Joe out. Their date includes a sexy magazine photo shoot. Check out CDL’s hot spoilers right here!

On the last episode, Jared and Clare went on an adventurous date that included bungee jumping. Back at the house, a new bachelor arrived with a date card and asks Tenley out. They went to a luxurious resort where they were serenaded by a mariachi band. Later, Clare lectured the entire cast before the cocktail party; and Jonathan and Mikey tried to convince Juelia that Joe was playing her. Did you watch the last episode? If you missed it, we have a full and detailed recap right here for you.

Claire who is generally known as the woman to beat ended up having a moment on tonight’s all new episode of “Bachelor In Paradise”. For it seems that this whole dating experience has finally begun to make Clare feel a little overwhelmed. Especially about her age.

She is 34 after all and its not like she could keep doing Bachelor In Paradise forever.

However Clare could have chosen better timing because she picked the exact moment to throw a slight breakdown while they were in the middle of a rose ceremony. And that kind of upset some of the guys. They didn’t know if she was going to come back and they left their own positions in limbo.

Although, they shouldn’t have been so worried. Clare threw around words “quitting” and “I can’t do this” and then in the next second she went back to the ceremony as if nothing had happened. Was it a quick recovery time or did Ashley I. have a point when she said that Clare wanted someone besides the host to follow her? Who knows! But after Ashley I. picked Jared – Clare chose to save JJ.

And several guys were forced to return home. Sadly this number included Jonathan who honestly appeared to have feeling for Juelia but was completely ignored the second Joe arrived on the show.

So while Jonathan is probably feeling the hurt right about now, he’ll at least be vindicated when it revealed that Joe was never interested in Juelia. Juelia had unfortunately claimed that she could fall in love with Joe and could even picture a future with him. Yet the moment Samantha arrived – it was like she no longer to cease to exist to Joe.

Thus for clarification, the truth about Joe and Samantha should be revealed. Particularly as it looks like those two have been in close communication these last couple of months. And had secretly arranged to be on the show together.

In other words, Samantha and Joe always knew they might have to play upon someone else’s feelings just to stay on the show but that part doesn’t seem to matter to either of them. And frankly Joe doesn’t care if goes tomorrow as long as he does so with Samantha.

And he pretty much made that part clear to everyone.

Samantha had gotten a date on her first day on the show and so she quickly asked out Joe. And he didn’t hesitate. Joe accepted her offer right off the bat, though it was in front of Juelia, and when those two were holding hands when they came back from said. With not a care in the world about who saw them.

So the hands thing definitely made Juelia like she was disrespected. People had tried to warn her about Joe earlier but she had refused to listen to any of them because Joe told her that he was a gentlemen. And then sought out ways to prove it.

Yet, with Samantha there, he had to be talked to into explaining himself to Juelia. Because for a while he was simply to ignore the uncomfortableness of it all. And just ignore Juelia until she got the point. But Jared put his foot down. He told Joe not to be that guy.

And so Joe did go on to talk to Juelia. Though the conversation was mostly her trying to tell him her feelings and him doing his best to wrap it up.

It’s sad but Juelia is never going to get the closure she’s seeking. Not from someone like Joe who is really coming off as this season’s villain. So sorry Juelia. You’re merely one more person that it’s going to be left disappointed.

Ashely S. and Dan managed to hit it off from the very beginning. And no kidding but they looked like they were going to be one of the couples that makes it. Thus, imagine my shock, when Ashely revealed she was falling in love and Dan said he might not even give her his rose this week.

Dan says he wants to view his options. He didn’t really give anyone else a chance prior to now and there’s a part of him that doesn’t know if Ashley is the one. And he feels like there are a few red flags with her.

He said he saw red flags and technically who hasn’t. Ashley can come across as a bit of a flak but that didn’t seem to bother him in the beginning. So why the change?

And is it in the water because Dan is not the only one that expressed having cold feet. Kirk was also going through the motions and for a while he didn’t know what to say to Carly. Carly being the woman he’s liked since day one and who had made it perfectly known that she was willing/ open to sleeping with him.

Yet for some reason Kirk wasn’t so sure he wanted to take her up on the offer.

He said he wasn’t sure and that he didn’t know how to tell Carly about what he’s been feeling. And overall it was a situation that became even more awkward once she finally got a date and wanted to spend it only with Kirk.

Kirk knew what their date would mean so before they moved forward – he did the honorable thing. He talked to her about where she wants the relationship to go and he told her about some of his own problems being in relationships. But ultimately he came to realize how much she mattered to him when he saw how serious she was about “Bachelor In Paradise”.

Carly had actually missed her brother’s wedding in Ireland so that she could come down to Mexico. So this whole thing is not a joke for her. And she wants to find the same love her brother did.

Hence two people ended up enjoying a certain suite while a new face was being introduced back at the Bachelor resort.

Megan if you recall was from this recent season of the Bachelor with Chris Soules and not only is she like Ashley S. in character but Dan was attracted to her from what looks like before the show. You see Dan admitted that he had been looking forward to possibly meeting her. And once he did – they got along quite well.

Though not as well as Samantha and Joe who were still claiming to have just have met!

But everyone eventually caught on to their ploy. And later a group of the contestants felt like they should confront Joe about what he did.

And if its sound like they were overstepping that’s because they did. However, they wanted Joe to realize what he did to Juelia. How much he set her back? Because Juelia is not like the other women. She’s a mother that had left behind her child in order to find love. And Joe took that chance away from her when she gave him her rose instead of someone more deserving.

Yet Joe didn’t want to fess up to any wrongdoing. He felt that telling her things shouldn’t have been an issue. Even when they were instances when he told her that he wasn’t using her and that his feelings for her could be real.

Which was all a lie on his part!

So Dan had to be the one to practically drag Joe into finally having it out with Juelia. Although Joe still won’t admit to what he did. And in fact was only willing to apologize to Juelia for possibly hurting her after she said she was going to tell Samantha what he been doing.

Prior to that, Joe was being very dismissive towards Juelia and he didn’t really care about her feelings. But he was scared about losing Samantha. Like genuinely scared. Thus Joe then tried to smooth talk Juelia into keeping her mouth closed.

He told her he would never hurt Samantha and that he only had the deepest respect for her friend. And Juelia literally looked at him and said those were the exact words he once used for her.