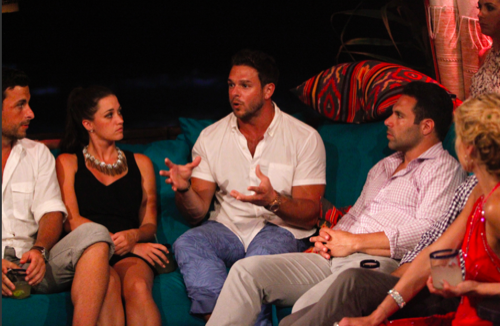 Bachelor In Paradise airs tonight on ABC with an all new August 10 season 2 episode 2B. We’ve got your recap down below! On tonight’s episode season Jared and Clare go on an adventurous date that includes bungee jumping. Back at the house, a new bachelor arrives with a date card and asks Tenley out. They go to a luxurious resort where they are serenaded by a mariachi band.

On the last episode, one bachelorette had a tearful meltdown and considered leaving Paradise. Meanwhile, Josh got a date card and asks Tenley out; and a new bachelor arrived but his abrasive behavior put everyone off. He took Juelia on a date but their budding relationship was short-lived after he revealed his true intentions behind coming to Paradise. Back at the house, Jared became embroiled in a love triangle that involved Ashley I. and Claire. Did you watch the last episode? If you missed it, we have a full and detailed recap right here for you.

On tonight’s episode per the ABC synopsis “Jared and Clare go on an adventurous date that includes bungee jumping. Back at the house, a new bachelor arrives with a date card and asks Tenley out. They go to a luxurious resort where they are serenaded by a mariachi band. Later, Clare lectures the entire cast before the cocktail party; and Jonathan and Mikey try to convince Juelia that Joe is playing her.”

Tonight’s episode of Bachelor In Paradise kicks off with Clare and Jared getting up and heading out on their 1-on-1 date together. They board a sailboat, which takes them to a cliff. Clare starts squealing when she realizes that they are going bungee jumping. Meanwhile, back at the beach Ashley Iaconetti is having a meltdown, she rants that Clare is a cougar and is too old for Jared. She refuses to lose Jared to her.

At the cliff, Clare and Jared are getting strapped in to their harnesses to go bungee jumping. Jared gives Clare a pep-talk because she is scared to jump off the cliff. They finally jump and Clare screams bloody murder the entire time – Clare is certain that the jump brought them closer. She jokes that she is going to buy him a dozen roses.

Back at the beach, Joe is giving Jeulia the cold shoulder after their date together. Joe is holding out, he wants to wait until Samantha shows up. Tenley and Mike Tenerelli think that Joe is acting pretty suspicious – why is he obsessed with a girl from Chris’s season that isn’t even there, and ignoring the girl that took him out on a date.

Clare and Jared return from their date, and Clare dishes to the girls about bungee jumping. Ashley I. goes to her room to cry, she doesn’t want to hear about Jared dating other girls. Meanwhile, Tenley is stuck n an awkward love triangle, and JJ and Josh are following her around like lose puppies. She is feeling overwhelmed, little does she know there is another guy arriving in paradise – Michael G. Michael arrives with a date card and he has his eye on Tenley. As soon as Michael arrives, he takes Tenley for a walk on the beach and invites her to go on a date with him. He reveals that she is the only reason that he even joined the show. Tenley is thrilled and accepts his invitation.

Later that night, Mikey T. decides to make a move on Juelia since Joe has been completely ignoring her. Mikey and Juelia take a walk on the beach, he sits down and tells her that he thinks they should get to know each other. She politely turns him down, and says that right now she really just wants to focus on her relationship with Joe – little does she know, Joe is just stringing her along until Samantha arrives.

Clare and Jared go for a walk on the beach – and it doesn’t go well. Jared brings up the fact that she is 8 years older than him, and then he tells her that he doesn’t feel a spark or butterflies with her. Clare is devastated, she can tell that there is not a future between them, she doesn’t think that Jared is ready to be in a serious relationship…especially with her.

Tenley and Michael G. head out on their date, a romantic dinner on water. While they are trying to talk, a trumpet player arrives and serenades them – they are shocked when an entire orchestra of over 3 dozen musicians join him. They get up and dance in the water, while they are surrounded by a band of 100 people. Tenley is overwhelmed by all of the magic that is happening – she has no idea what she is going to do at the rose ceremony tomorrow.

It’s time for the next rose ceremony, and tonight the girls will be handing out the roses to the guys. Chris Harrison arrives to kick off the cocktail party, and asks them who is nervous. Joe announces that he is a little nervous, and Juelia laughs that he is totally safe and he is getting her rose. After Chris Harrison leaves, Jonathan takes Juelia aside and tells her that she is making a mistake and Joe doesn’t actually like her. Juelia thinks that Jonathan is just desperate because he wants her rose and doesn’t want to go home.

Next, Mikey T. takes Juelia aside and tells her basically the same thing. He reminds her that next week Joe will have the power, and when new girls come in – he will probably ditch her. Joe takes Juelia aside, and he kisses her and lies to her and tells her that he is there for her. Joe is determined to get a rose so that he can stay in the house for when Samantha arrives, and he is shamelessly playing Juelia. Joe is livid thugh – he says that he wants to kill Mikey T. and Jonathan, he rants that if they were home in Kentucky he would get a pair of brass knuckles and punch him. Mikey confronts Joe – Joe informs him that from “man to man” he should have come to him first. After a while they shake it out, and Joe tells him to have a goof night. After Mikey leaves Joe laughs to himself that he just made Mikey “his bitch.” Then he goes to confront Jonathan and laughs that he made him “his bitch” too. After their talk, Jonathan goes to the bathroom and starts sobbing, Joe follows him and comforts him as he continues to apologize for throwing him under the bus.

Meanwhile, back at the cocktail party Ashley I. is putting the moves on Jared, and making out with him. Clare watches from the other side of the room and is obviously not happy. She is upset because for two years in a row in paradise, she hasn’t found love and she feels like nobody wants to be with her. She begins ranting to everyone at the cocktail party that she “didn’t come here to play games or strategize, and last year people were actually looking to find love and a real connection.” Clare starts sobbing that she came here to find love. Before they start the rose ceremony, Jade calls Clare out – she tells her that she is offended by her speech because she definitely joined the show for love, and so did everybody else. Clare snaps back, “if the shoe fits – wear it.”