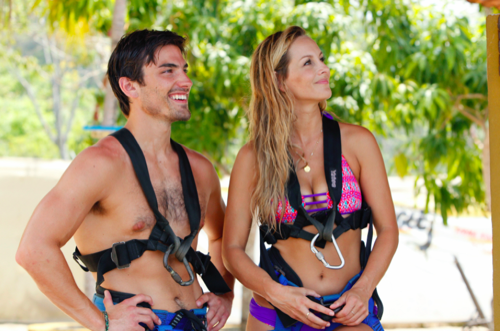 Bachelor In Paradise airs tonight on ABC with an all new August 9 season 2 episode 3. We’ve got your recap down below! On tonight’s episode season one bachelorette has a tearful meltdown and considers leaving Paradise.

On the last episode, Clare received a date card and goes on a mission to find herself a man. Later, Ashley S. got a date card and chose Dan to accompany her. On the date, the two discussed her infamous crazy girl reputation. At the rose ceremony, the men handed out roses and one woman is forced to leave paradise. Did you watch the last episode? If you missed it, we have a full and detailed recap right here for you.

On tonight’s episode per the ABC synopsis “one bachelorette has a tearful meltdown and considers leaving Paradise. Meanwhile, Josh gets a date card and asks Tenley out; and a new bachelor arrives but his abrasive behavior puts everyone off. He takes Juelia on a date but their budding relationship is short-lived after he reveals his true intentions behind coming to Paradise. Back at the house, Jared becomes embroiled in a love triangle that involves Ashley I. and Claire.”

After an interesting rose ceremony, there appears to drama brewing between the sisters. And unfortunately the ladies just don’t know how to keep that to themselves on tonight’s episode of “Bachelor In Paradise”.

Ashley I. and her sister Lauren first came across as two sisters that are really quite close. Yet, while they may share the overly dramatic crying habit, you can see that Lauren didn’t actually come onto the show to support her big sister. She most likely arrived at the resort as a nice break from back home. And from the turbulent relationship she has with a man in a committed relationship with someone else.

Yes, a man that’s already taken. Whom she also apparently cares quite dearly for and is now feeling guilty about hurting by coming on this trip.

So that, funnily enough, explains why Lauren has been kicking up a fuss since day one and has been demanding that her sister let her leave the show. But, just as Lauren was faking it at being a supportive sister, so was Ashley I. And Ashley is not going to give up on her chance at Jared. Not even if it’s for her heartbroken sister.

Therefore, Ashley came up with a plan.

She didn’t like this guy that her sister had back at home. And, in order to convince Lauren to stay/ give this other person up, Ashley decided to fix her sister up with first Mikey and then Joshua. Mikey as you know had paid a lot of attention to Lauren on the first night but has since met Claire. Thus he ended up a no-go!

Although Claire, as it turns out, soon became a hot commodity. Claire being a woman who hasn’t used up all of her time there to either run off to cry or seclude herself with her sister. Because that’s simply on more thing that separates Ashley and Lauren from everyone else.

The other cast members have said that the sisters aren’t doing themselves any favors by constantly going off on their own. As it kind of makes it hard for someone to get to know either of them and, in this case, that goes especially for Ashley and Jared.

With Ashley mostly MIA or attempting to hook her sister up with new face Joshua, Jared has started to look elsewhere. And Claire is definitely up for grabs despite a possibly connection with Mikey. So those two became interested in each other.

And Ashley, was on her own when her sister left and Jared had seemingly moved on.

Lauren decided to go after Joshua but he didn’t pick her for his date and instead went with Tenley. Now Tenley was happy to go with him though she’s lately has been feeling out JJ. And JJ actually really likes her in return.

So its love triangle on top of love triangle. With real connections scattered around. Carly and Kirk are still going strong, Dan and Ashley are the cute odd couple, and Tanner and Jade have gotten really close since their date.

But Tenley and JJ was on the fence what with Joshua asking her out. And, laughably, no one missed Lauren when she left. Thus the next big thing was Joe. Joe was known amongst the guys and being funny and outgoing. And when he arrived on the show, most of the girls were sitting back waiting to be wowed.

Yet, for some reason, Joe came off as awkward and one point was even insulting. Or at least that’s how Clare felt he was being towards her.

In actuality, though, he had merely turned to Claire and asked her if this was her second rodeo because he wasn’t sure if she has been on another season of Bachelor in Paradise. And it seems that being reminded about her past was what she chose to get offended by.

Meanwhile this same Joe had asked if anyone wanted to go horseback riding and Juelia said yes. So that was that. Although some of the ladies had later gotten offended that he never came right out to ask Juelia, sweet and nice Juelia, properly. Like a gentlemen should have.

Juelia had left her daughter in order to meet someone that could possibly be around for the long haul. So the ladies don’t want her sacrifice to have been for nothing. Nor do they want Juelia to be taken for granted.

And that is a concern when it comes to Joe.

Jonathan, for one, feels like Joe is only using Juelia to get a rose and that’s hard for him because he likes Juelia. And he felt he might have had a connection with her prior to Joe’s arrival. Yet Juelia appears to have gotten over Joe’s awkward start on the show and the two went on to have a great first date.

They went horseback riding and then followed that up by taking a dip in the waterfall. So Juelia felt like the whole thing had been magical and that she had honestly developed feelings for someone else. But did Joe feel the same?

No, he did not. He later bragged about being in it only for the rose. Thereby proving the worst. And Joe turned out to be an ass.

He insulted Juelia’s intelligence and now that I think about it he could have brought up her daughter solely as a ruse rather genuine interest.

And tonight’s episode continued to be a night of red flags. Joshua’s date with Tenley was just as good as the Juelia/Joe fiasco. Meaning the two instantly hit it off and afterwards Tenley said that she felt a spark. But sadly for her, that spark went out the moment she heard about his hard partying lifestyle back home.

Joshua apparently is way into the partying. He openly talked about molly and other drugs as if it was no big thing with everyone else. And when it came to Tenley, he then tried to downplay his earlier comments by telling her his past experiences were all overstated.

But that left Tenley in their position where she didn’t know if she could trust him or the guys that had tried to warn her about him.

Yet the real drama kicked off the closer everyone got to the rose ceremony. In one last bid to get Juelia to reconsider her choice, Jonathan approached her and had then attempted to remind her that he spent the last week mainly focused on her. They’ve talked and they’ve connected. And he didn’t want her to forget that just because Joe came and took her to the waterfall.

But she didn’t want to hear it. In fact she refused to hear it because Juelia said she felt something real with Joe ironically at the same time that Joe is telling the producers that he’s waiting for someone else to show up.

And as for Mikey, he ended up finding out that Clare had feelings for someone else and proceeded to spin out of control.

See Mikey felt something for her and he thought they had been getting along. So when the other guys were telling him that she wasn’t that interested in him – he decided to ask Tenley to give him her honest opinion as well. And she told him that lately Clare has been mentioning Jared quite a lot.

So that particular ticking time bomb blew up when Jared received another date card and asked out Clare in front of everyone. And Clare said yes without hesitating. Literally without hesitating. As in she didn’t even look over at anyone else or waited to give a second before jumping on board.

Mikey felt like he had been used and he didn’t exactly feel up to talking to Clare when she later approached him. So those two got into a fight and by the end of the night – three people had cried, two had yelled, and Jared had wondered if his date was still on.