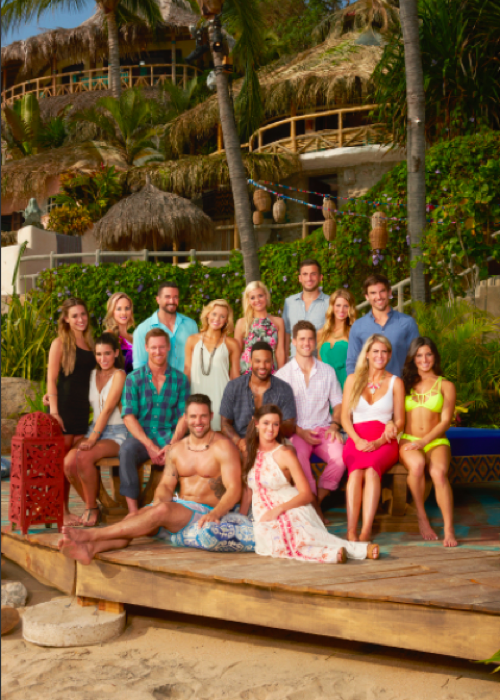 Bachelor In Paradise airs tonight on ABC with an all new August 3 season 2 episode 1B. We’ve got your recap down below! On tonight’s episode Clare receives a date card and goes on a mission to find herself a man. Later, Ashley S. gets a date card and chooses Dan to accompany her. On the date, the two discuss her infamous crazy girl reputation.

On the last episode, looking for a second chance at love on the two-night season premiere of “Bachelor in Paradise,” the cast arrived one by one to their own private Paradise in the gorgeous town of Sayulita, located in Vallarta-Nayarit, Mexico. Welcomed by Chris Harrison, the cast quickly got acquainted at a Bachelor-style cocktail party on the shores of Playa Escondida. The mood changed quickly when the Mystery Woman entered Paradise, and the cast was shocked to learn who she was. Breaking the tension, Chris Harrison interrupted to explain the rules of Paradise and one shocking twist. This week, the men handed out a rose to someone they’d like to spend more time getting to know and the women who did not receive roses had to leave Paradise forever. Then, he informed the group he has one more surprise in store.  Did you watch the last episode? If you missed it, we have a full and detailed recap right here for you.

On tonight’s episode per the ABC synopsis “Clare receives a date card and goes on a mission to find herself a man. Later, Ashley S. gets a date card and chooses Dan to accompany her. On the date, the two discuss her infamous crazy girl reputation. At the rose ceremony, the men hand out roses and one woman is forced to leave paradise.”

Tonight’s episode of Bachelor In Paradise kicks off with the guys and girls sitting on the beach watching a thunderstorm over the ocean. While they are sitting outside a woman arrives – it’s Clare Crawley from Juan Pablo’s season of The Bachelor, and she appeared on Bachelor In Paradise last season. Clare introduces herself to everyone – and she automatically sets her sights on Jared Haibon.

Clare arrives with a date card, she sits down with the other girls – to see which one of them is interested in who, she doesn’t want to step on anyone’s toes. Ashley I. accounces that she has “dibs” on Jared. The other girls think that she should ask Dan out on a date, meanwhile he is still with Ashley Salter at the hospital. Ashley S. and Dan return to paradise, and it is obvious that he and Ashley got very close while they were at the hospital. Clare realizes that she is stuck with Mikey and JJ, and all of the other guys are basically spoken for. Clare heads to her room and talks to a crab that is crawling around the room about which one of the guys she should ask on a date. Sadly, the crab doesn’t offer much insight on which guy she should choose.
The next morning everyone is eager to see who Clare asks out on a date, Jade is scared she is going to try and steal Tanner from her. Mikey invites Clare to go for a walk on the beach with him, but she isn’t really isn’t that attracted to him. Mikey tells her that he is dying to go on a date with her, and he would love if she chose him. Clare feels super awkward but she agrees to take him on her date, he confesses that he has always had a crush on her when he saw her on TV. Clare is impressed with his confidence though and the fact that he basically invited himself on the date.

Clare and Mikey head out on their date – at a treehouse where they meet with a yoga instructor to learn some partner yoga. The instructor reassures them that they are going to “work on their chakras” to get more in touch with their “sexual parts.” Clare thinks that tantric yoga on a first date is a bit awkward – and she is freaking out. First Mikey and Clare have to rub their butts on each other, then Mikey learns how to hold Clare over his head with his legs. Mikey says that his favorite position of tantric yoga is “downward Clare,” he is obviously loving tantric yoga. After their yoga session, Clare and Mikey go for a swim together. Clare tries to give him “the talk” and tells Mikey that she isn’t ready to get serious with him and she wants to “test the waters” with other guys.

Back at the house another date card arrives, Tenley is praying that it is for her because she still hasn’t gotten close to any of the guys yet. Instead the date card is for Ashley S. and she invites Dan out to dinner with her. While they are eating Ashley raves that their first date at the hospital was one of the best dates of her life – and she chose Dan because she loves his sense of humor and “has a really nice face.”

Later that night everyone seems to be coupled up, Tenley is freaking out because it is looking like none of the guys are going to give her a rose. Tenley sees Jared alone, and seizes the opportunity to try and sink her claws in to him, they take a romantic walk on the beach in the dark. Meanwhile, Ashley I. is freaking out when she realizes Jared is off with Tenley. She decides to get drunk so that when Jared comes back she can open up to him and “claim her stake.” Lauren encourages Ashley and gives her a pep talk, she tells her to “make a move,” because she is obviously not getting a rose and if Ashley doesn’t – they are both screwed and will have to go home.

Ashley steals Jared away from Tenley, and Tenley heads back inside and cries because she is “too old” and none of the guys like her. Jared and Ashley head down to the beach – and he informs Ashley that he is here to play the field, he doesn’t want to commit to any of the girls yet. Ashley heads back and tells her sister that it is not looking good and there is a chance that Jared isn’t giving her a rose. Ashley and Lauren mope around about how horrible they are to getting guys. They think it might be because they don’t have fake boobs like all of the other girls.

It’s the night of the rose ceremony, and the guys will be handing out the roses. They are thrilled that they have the power and the girls are going to have to kiss their butts for roses. The girls arrive at the cocktail party and are ready to start campaigning for roses, Tenley is nervous because she thinks that she is going to get sent home. Jillian is confident that she is getting a rose from JJ, because he already promised her and he kissed her. Jillian and JJ head down to the beach and Jillian reassures him that she likes him more than any of the other guys in paradise. Clare sits down with Jared and chats him up, which does not go over well with Ashley I. Jared shocks Clare and tells her that if no one gives her a rose before his name is called – he is going to give his rose to her.